VANCOUVER, BC / ACCESSWIRE / December 4, 2019 / Black Tusk Resources Inc. ("Black Tusk" or the "Company) (CSE:TUSK)(OTC:BTKRF)(Frankfurt: 0NB) is pleased to announce that preliminary data compilation has been completed for the McKenzie East Project located 30 kilometres north of Val d'Or, Quebec. The work was undertaken by Perry Grunenberg, P.Geo, OGQ, a director of Black Tusk Resources.

The property comprises 2 claim groups separated by 1 kilometre. The larger northern group totals 1,964 hectares over 42 claims, with the south totalling 178 hectares over 4 claims.

The property is dominated by intrusive rocks regionally mapped as Archean quartz diorite, granodiorite and tonalite. The northeast portion of the property is underlain by volcanoclastic rocks of andesite to rhyolite composition. The general geologic trend, including regionally mapped faults, is northwest to southeast across the project area.

The SIGEOM database indicates that nine drill holes plot within the McKenzie East Project claims. The data shows a range of 0.1 to 2.2 grams per tonne gold in intercepts of 0.3 to 1.8 metres downhole width (true widths unknown).

Regional magnetic surveying indicates a correlation between magnetic response and location of mineralized showings. The Tilt Angle Magnetic map shows possible structures that both parallel and cross the general northwest to southeast trend of geology.

The most advanced project in the immediate area of McKenzie East Project is the McKenzie Break Project of Monarch Gold Corporation(MQR). At the McKenzie Break, gold mineralization is reported as visually distinctive 1 centimeter to 2 metre wide quartz-carbonate veins and vein complexes containing gold. A 2018 Technical Report prepared for Monarques Gold(1)includes a mineral resource estimate with a pit constrained indicated resource summarized as 939,860 metric tons (tonnes) at a grade of 1.59 g/t, and an underground indicated resource of 281,739 tonnes at a grade of 5.90 g/t, with an inferred resource for underground deposit of 270,103 tonnes at 5.66 g/t(2).

Black Tusk will be undertaking further analysis of the available data in planning for exploration on the McKenzie East Project. A preliminary proposed exploration program may include ground magnetic and electromagnetic surveying, soil sampling, mapping/prospecting and trenching. These surveys will help define targets for diamond drilling. 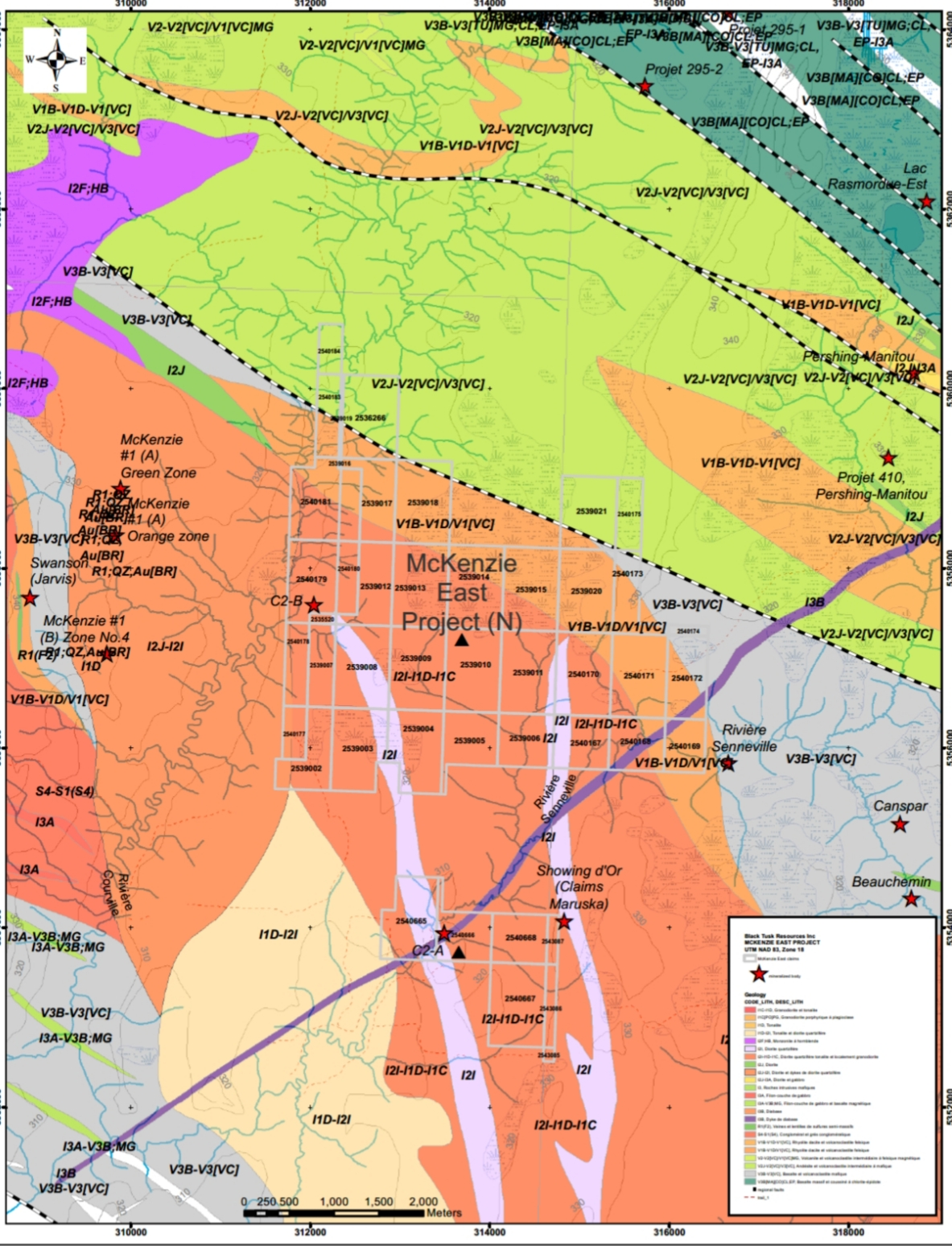 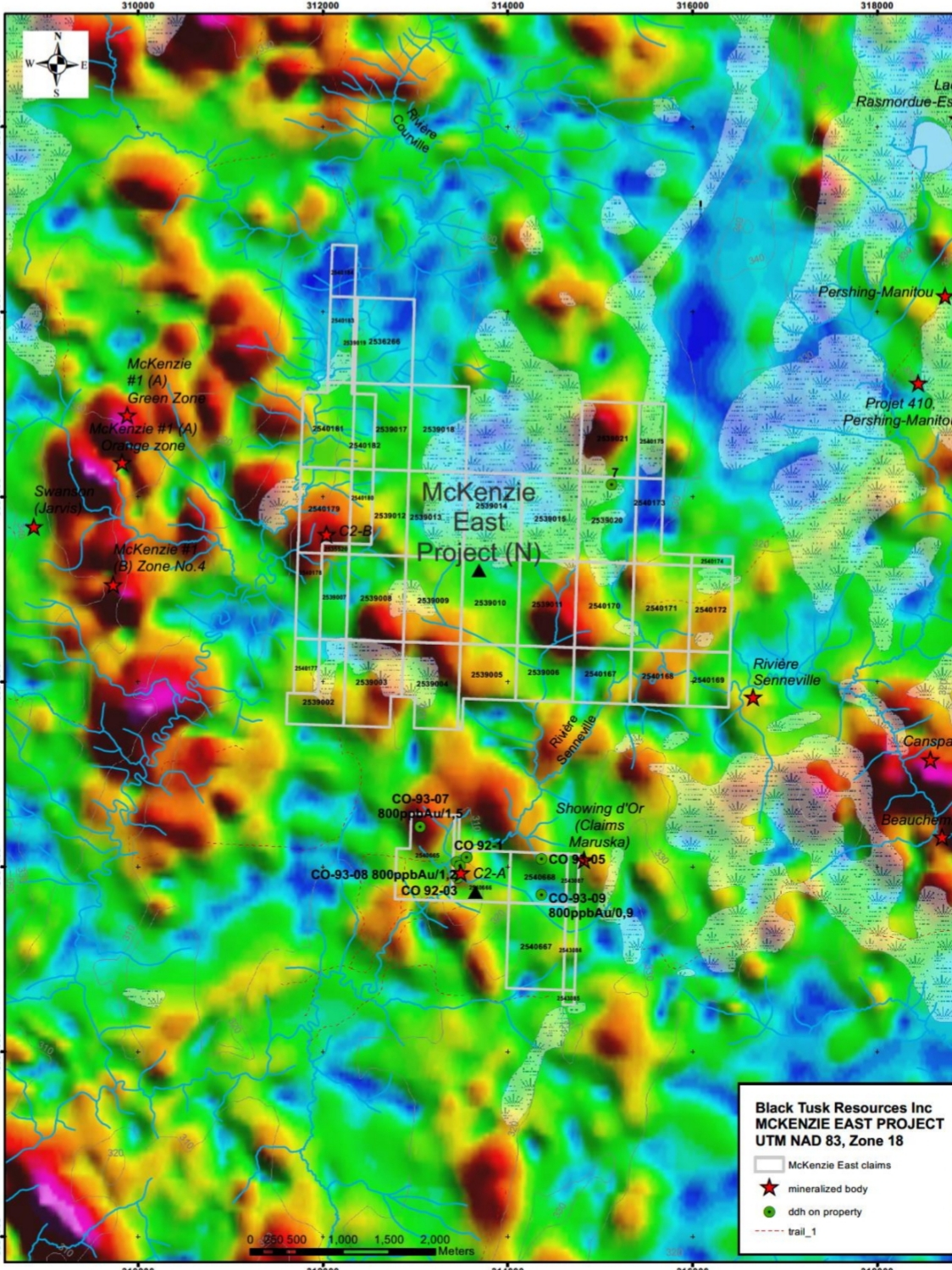 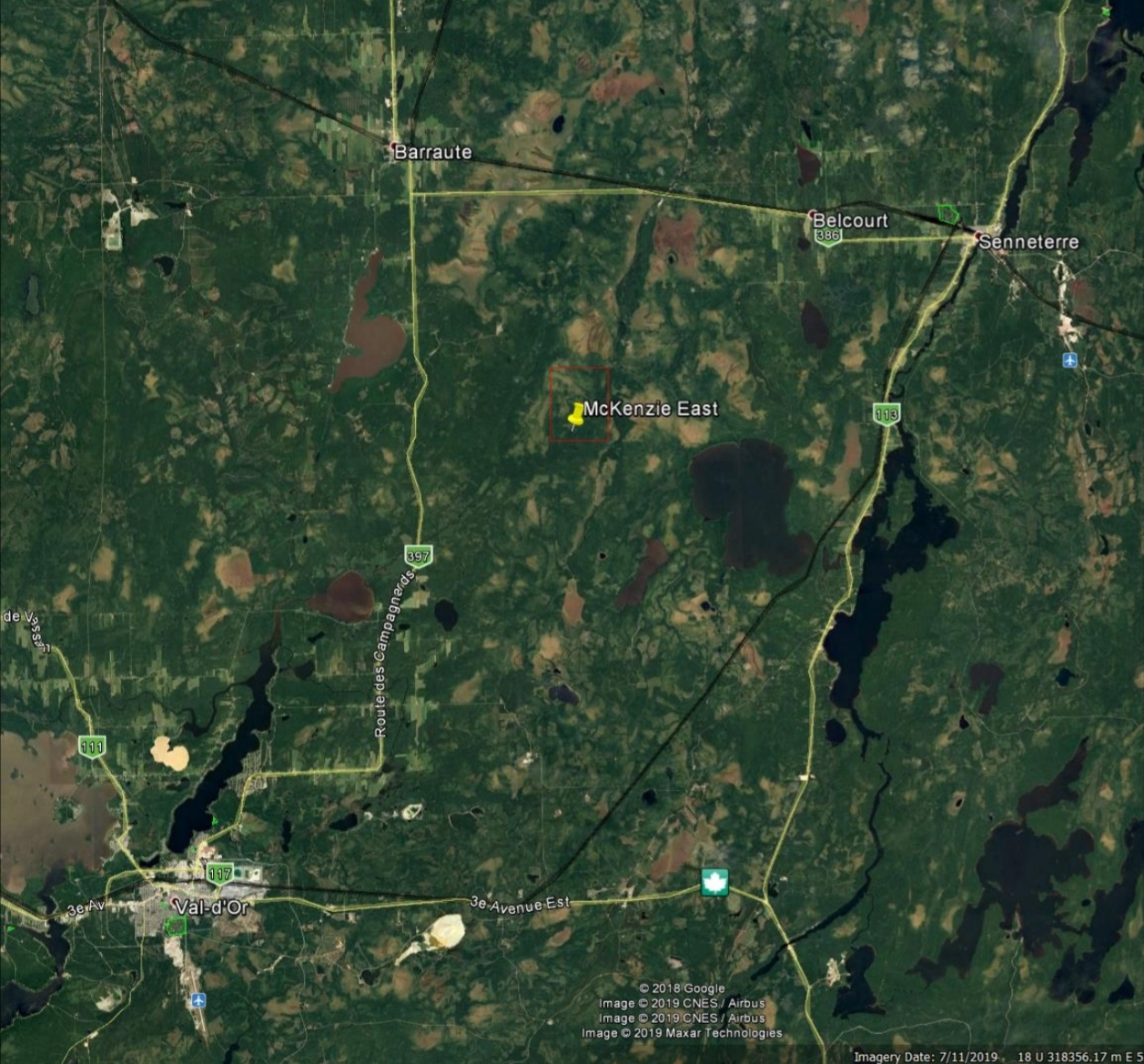 1 (NI 43-101 Technical Report on the McKenzie Break Project, April 17, 2018, Alain-Jean Beauregard, P.Geo., andDaniel Gaudreault, Eng., of Geologica Groupe-Conseil Inc. and Christian D'Amours, P.Geo., of GeoPointCom Inc.). 2 The reader is cautioned that resources that exist on adjacent properties are not necessarily indicative of potential on the Black Tusk - McKenzie East Project.