MARTINSVILLE, VA / ACCESSWIRE / December 3, 2019 / Thirty-three years ago, the day after Thanksgiving in 1986, branch manager at that time, Phyllis Karavatakis, cut the ribbon of the bank's newest branch in Collinsville, Virginia. On December 2, 2019, Karavatakis, now as Carter Bank & Trust's (NASDAQ:CARE) president and chief banking officer, cut the ribbon to celebrate the branch's extensive renovation. 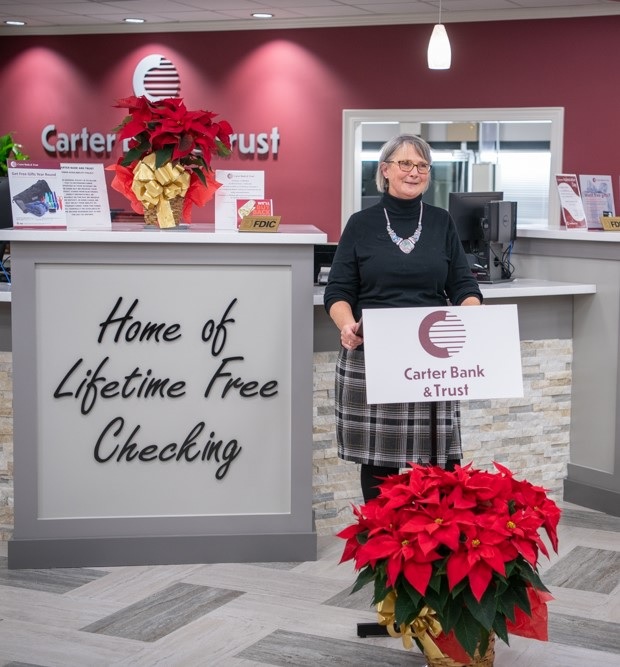 This renovated branch was formerly Patrick Henry National Bank and one of 10 banks that merged in 2007 to form Carter Bank & Trust in recognition of the 10 banks' founder, Worth Harris Carter Jr. This renovation will be replicated in other renovations throughout Carter Bank & Trust's service regions in Virginia and North Carolina.

"While the Collinsville branch is an important part of our bank network, it also holds a very special place in my heart. I was seven months pregnant with my daughter Olivia, who is now the bank's facilities director; and Jan Caudill, who was my 7 a.m. to 7 p.m. drive-thru teller at the time, is now branch manager," Karavatakis said.

"Not only did managing this branch launch my career, it also has launched many others' careers both within and outside of the bank," she said.

Karavatakis will be stepping down as president and chief banking officer at year-end to become senior executive vice president for special projects. "As I begin to wind down my career with Carter Bank & Trust, I am so happy to turn it over to the next generation that will continue to be focused on the future," Karavatakis said.

Karavatakis proceeded to introduce her daughter Olivia, who gave insights about this branch's transformation, such as, using local contractors and vendors and putting more thought into the health and environment impacts the bank will create. For example, but not limited to:

CEO Litz Van Dyke said, while having comfortable, up-to-date branches is important, "it is our people, not our facilities that set us apart." Chairman of the Board of Directors Jim Haskins agreed and shared that the board is supportive of Van Dyke and his executive management team's leadership, as well as the direction of the bank.

Headquartered in Martinsville, Virginia, Carter Bank & Trust is a $4.0 billion state-chartered community bank in Virginia with more than 100 branches in Virginia and North Carolina.