TORONTO, ON / ACCESSWIRE / November 27, 2019 / Murchison Minerals Ltd. ("Murchison" or the "Company") (TSX-V:MUR) is pleased to announce it has acquired an additional 5,083 hectares (50.8 km2) of mineral claims in five blocks located northeast of the existing Brabant Lake project in northern Saskatchewan.

These five claim blocks are located relatively close to Highway 102, and were staked based on 3 criteria:

1) The presence of EM conductors

These anomalies were identified from a 1,480 line km VTEM survey completed in April/May 2012, which is similar to Murchison's 2011 VTEM survey that covered the Brabant-McKenzie deposit. This survey data is publicly available in government files. The conductors range in length from 500 metres to over 4 kilometres. This VTEM survey also outlined a significant EM conductor on lands already staked by Murchison (south of Henry 2). The areas are dominantly underlain by garnetiferous biotite gneisses and volcanic rocks similar to the Brabant-McKenzie VMS deposit. The comparable host rock packages to the Deposit, proximity to the highway and favorable geophysics make these claims highly prospective. 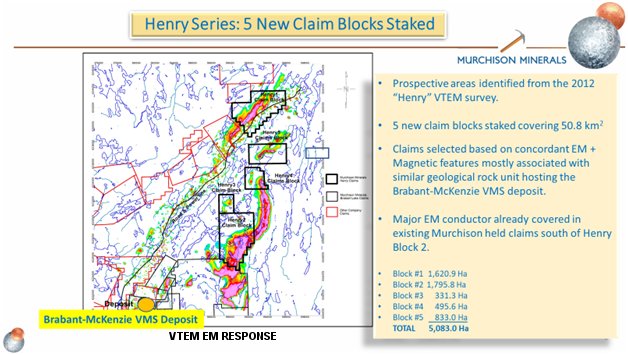 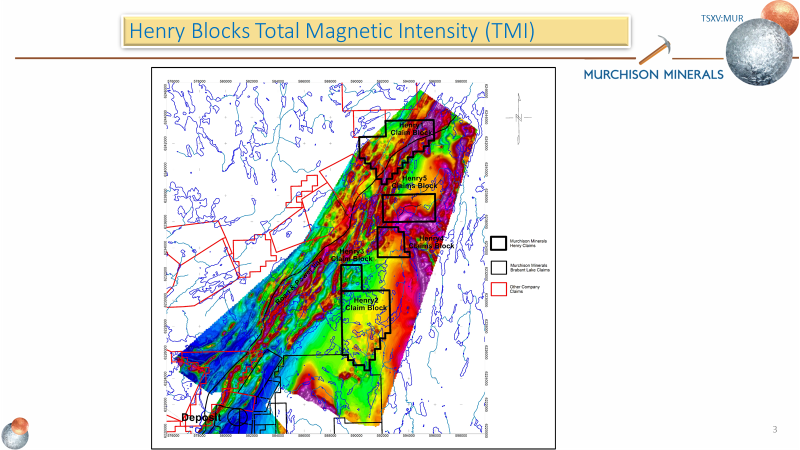 Murchison currently has one VMS orebody which remains open to expansion and twelve high-priority targets which are scheduled to be drilled this coming winter. The addition of five new prospective claim blocks significantly enhances the Company's land holdings.

The selection of these claims relied on VTEM data and a high quality Geological Survey of Canada geological map Open File 4288. VTEM conductors with magnetic coincidence that showed similar geology to the Brabant-McKenzie VMS deposit were identified and selected. Henry 1-3-4-5 are completely covered by the geological map, whereas Henry 2 is partially covered. However, geophysical characteristics of Henry 2 are positive.

Henry 1 is located immediately to the west of highway 102. It consists of a 4 km long conductive zone which is magnetically active and shows favourable geology. It has received limited historical exploration.

Henry 2 consists of a very large and magnetically complex conductive zone approximately 14 km long that is approximately 8 km east of Highway 102. A significant portion of the southern zone is already contained within previously staked Murchison claims. The geological information is limited, however zones of active magnetic coincident with conductors are included in the Henry 2 claims.

Henry 3, 4 and 5 consist of isolated conductive zones ranging from 1.4 to 2.8 km long that show complex magnetic activity and favourable geology and are all within 3.5 km east of Highway 102. For Henry 5, the magnetic data conflicts with the geological interpretation and indicates a more favourable magnetic environment.

The Brabant-McKenzie VMS deposit has an NI 43-101 resources of:

The foregoing scientific and technical disclosures have been reviewed by Ehsan Salmabadi, P. Geo., and Martin St-Pierre, P. Geoph., qualified persons as defined by National Instrument 43-101. Mr. Salmabadi and Mr. St-Pierre are independent consultants to Murchison and the Brabant Lake project.

About the Brabant Lake Project

The Brabant Lake project is located 175 kilometres northeast of La Ronge, Saskatchewan and approximately three kilometres from the community of Brabant Lake. The area is accessed year‐round via provincial Highway 102 and is serviced by grid power. The project consists of one mining lease, which hosts the Brabant‐McKenzie VMS deposit, and additional mineral claims totalling 366 square kilometres, which cover over 40 kilometres of strike length over favourable geological horizons, multiple known mineralized showings and identified geophysical conductors.

Murchison is a Canadian‐based exploration company focused on the exploration and development of the 100% owned Brabant Lake zinc‐copper‐silver project in north‐central Saskatchewan. The Company also has a 100% interest in the HPM nickel‐copper‐cobalt project in Quebec. Murchison currently has 48.4 million shares issued and outstanding.

Additional information about Murchison and its exploration projects can be found on the Company's website at www.murchisonminerals.com. For further information, please contact: