VANCOUVER, BC / ACCESSWIRE / November 21, 2019 / Barksdale Capital Corp. ("Barksdale" or the "Company") (TSXV:BRO)(OTCQB:BRKCF) is pleased to announce the initial drill target at the Cosmos porphyry copper-molybdenum-silver-gold prospect on its recently acquired, and 100% owned, San Antonio property in Santa Cruz County, Arizona.

Barksdale's President and CEO, Rick Trotman commented, "We believe that our newly acquired San Antonio project has a high value copper porphyry target located under shallow gravel cover. We acquired the project because we saw clear indications of a potentially large porphyry system that could yield a significant shallow discovery for the benefit of our shareholders. The last major discovery of a copper porphyry in the United States was Resolution in 1995, so we're very pleased that we've been able to add this exciting opportunity to our portfolio. Our team is actively developing a drill program to test Cosmos as soon as possible."

Porphyries in the Patagonia Mountains

The Patagonia mountain range hosts a series of early Tertiary aged intrusions that have been emplaced into a series of Precambrian and Paleozoic rocks. These intrusions are known to host multiple copper porphyry copper deposits, which were discovered and explored by various mining companies in the 1970's and 1980's. This historic work has identified three deposits that have been partially delineated by modern drilling, including the Sunnyside, Red Mountain, and Ventura deposits. These productive porphyries have been shown to be large (>200 million tons to +1 billion tons) and are typically well mineralized, yielding average grades between 0.25% and 0.60% copper, with accompanying credits of molybdenum, gold, and silver. The historic challenge has been that the previous discoveries generally occur at significant depths, extending from 400m to over 1,500m. To date, these porphyry copper deposits have not shown themselves to be economically viable, but the distal high-grade mineral deposits associated with their emplacement have been mined for over a 100 years, including epithermal silver-lead-zinc, copper-bearing breccia pipes, and sedimentary rock hosted silver-lead-zinc mantos and skarns. The current focus of district exploration efforts is on the manto and skarn deposits, such as those at Sunnyside (Barksdale) and Taylor-Hermosa (South32). The discovery of a shallow copper porphyry, which is what is being targeted at Cosmos, would likely have a much lower economic threshold for development than the deep known copper porphyry deposits in the district. 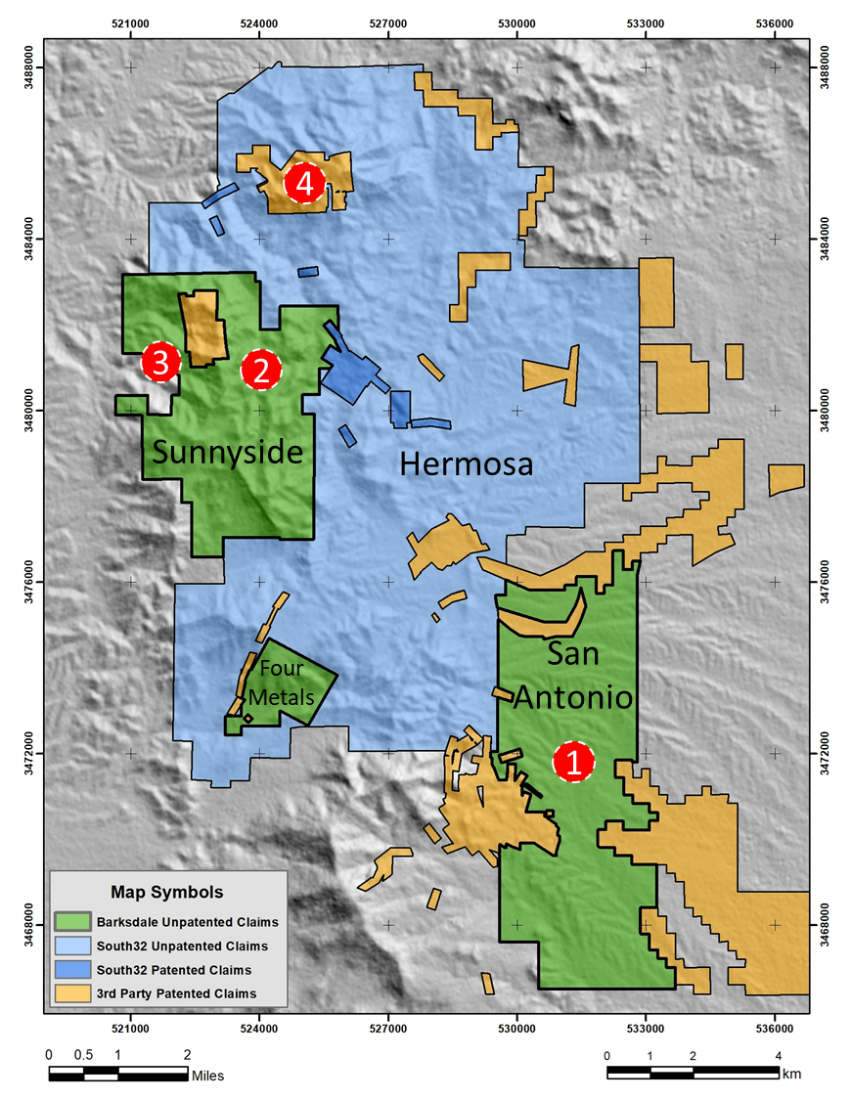 The San Antonio property is located approximately 5km southeast of the Company's Sunnyside project and forms a contiguous block of mineral claims extending north from the Mexican border for approximately 5km (Figure 1). San Antonio is mostly covered by a shallow veneer of Ternary gravels and alluvial deposits as seen in Figure 2. These cover rocks have limited the ability for the property to be prospected by traditional methods of geologic mapping and geochemical sampling, hence only an initial phase of recent early-stage exploration has been completed and the property remains untested by drilling. With the aid of modern geophysical technology, a shallow drill target with a buried copper porphyry-like signature has been identified near the center of the San Antonio claim block. 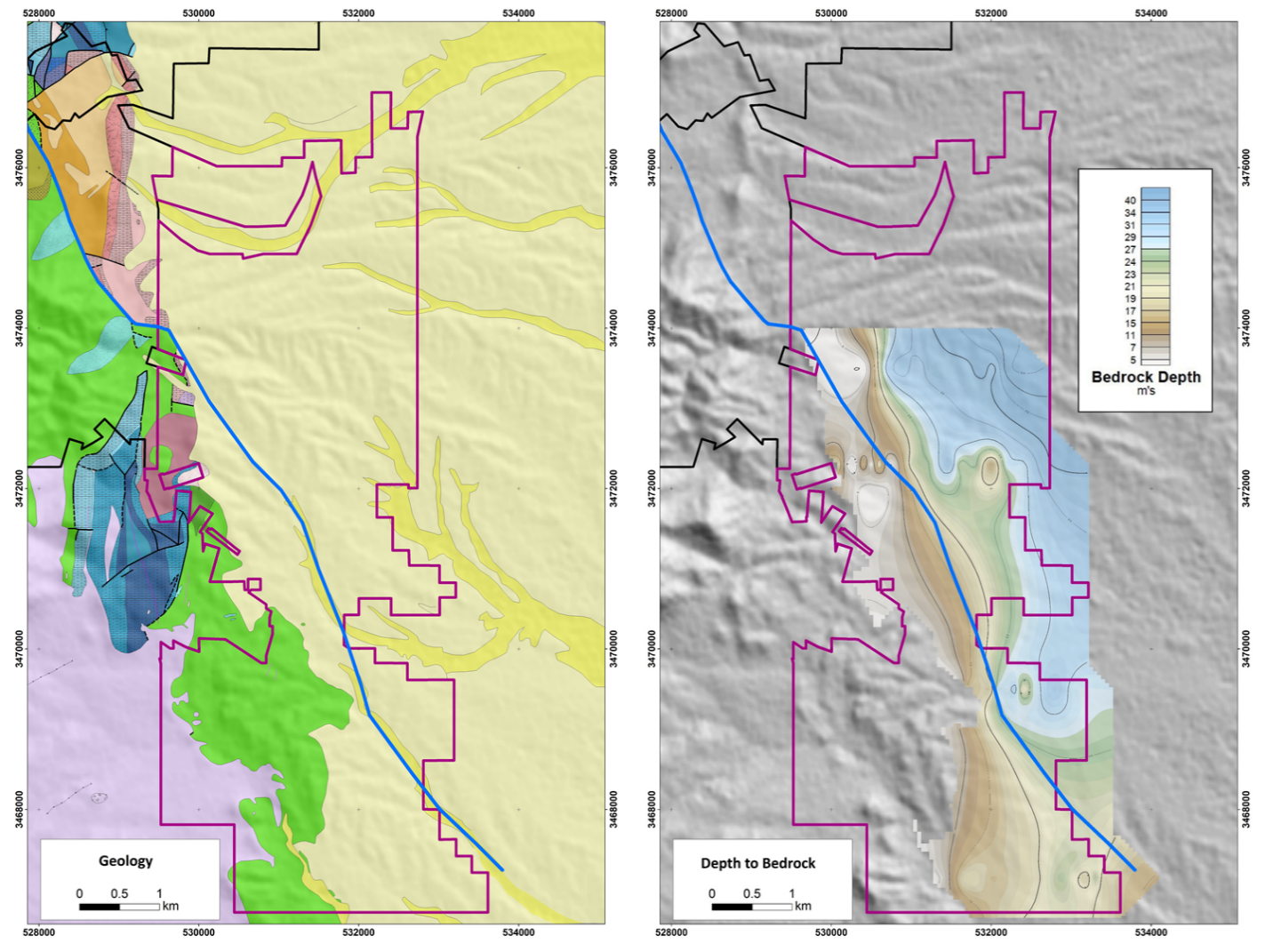 Figure 2. The majority of San Antonio is covered by thin gravels (yellow colors in figure on the left). Passive seismic soundings have provided detail on the depth-to-bedrock (right) in covered areas. The Harshaw fault is shown as a blue line. Barksdale's claim position is outlined in magenta.

The Cosmos porphyry copper-molybdenum-gold-silver drill target is located on the east side of the projected trace of a large regional structure known as the Harshaw fault (Figure 2), which is a deep-seated structure that is known to control the emplacement of multiple intrusions and their associated mineral deposits within the Patagonia mountains. While more than 80% of the San Antonio project is covered in Ternary gravels and alluvial deposits, passive seismic soundings have shown that the cover material is relatively shallow over the Cosmos drill target, ranging from as little as 10 meters in the southwest to forty meters in the northeast. 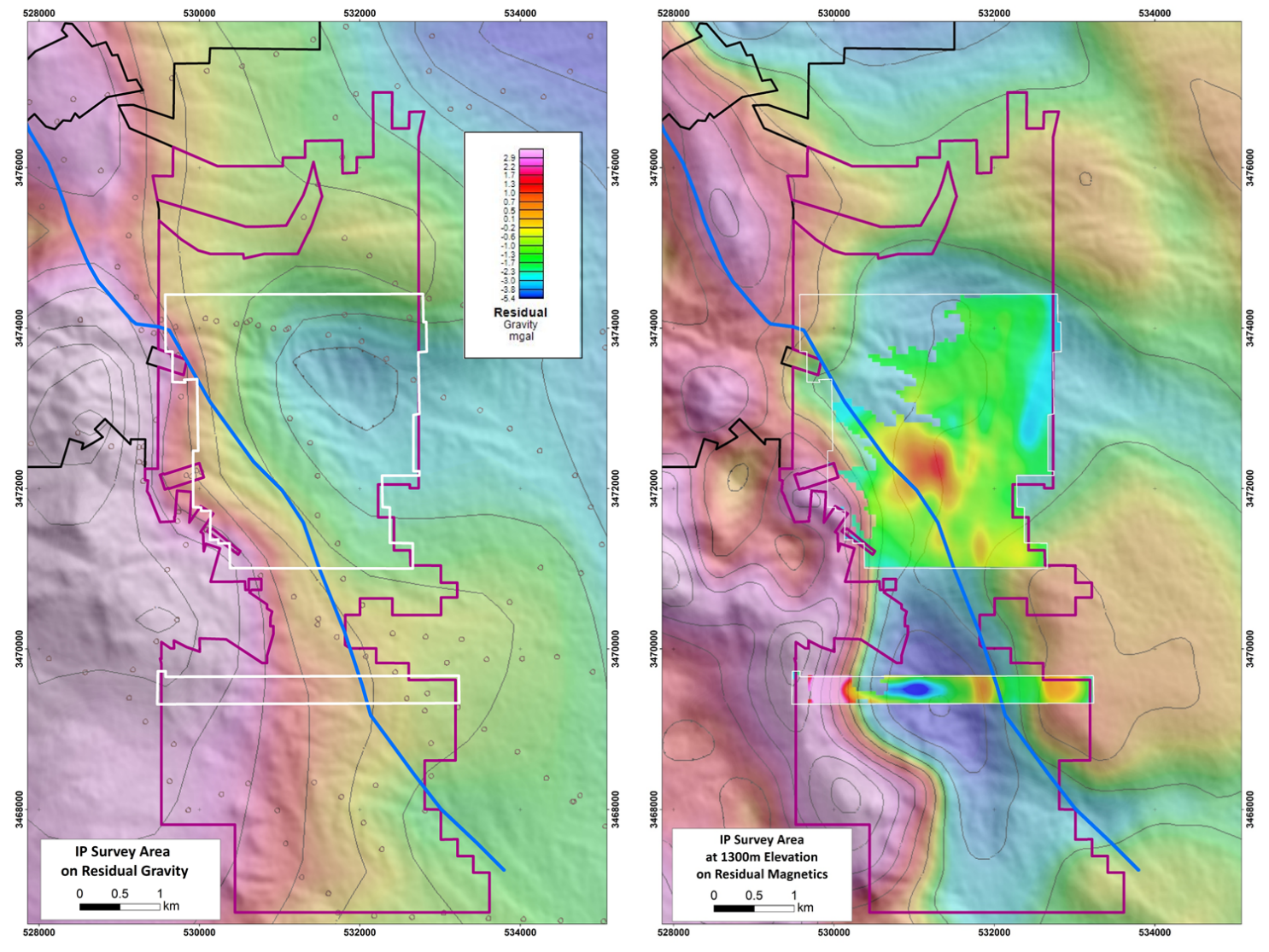 Figure 3. A property scale gravity image (left) highlights the location of a potential buried intrusive, which is shown as a blue embayment in the center of the figure. A regional, RTP, airborne magnetics image with an overlay of IP chargeability data (right) identified a potential alteration effect magnetic low associated with the buried intrusive as highlighted in the various shades of blue as well as a broad zone of potential sulfide mineralization (at 200m depth) highlighted by orange and red colors within the magnetic low. The bold white line highlights the IP survey area shown in Figure 3. The Harshaw fault is shown as a blue line. Barksdale's claim position is outlined in magenta.

Additional geophysical surveys completed in 2018 by the previous owner of the property have highlighted a series of coincident features indicate that an intrusive body may be present in the subsurface. These surveys include gravity, magnetics, and induced polarization ("IP"), which outline a circular shaped feature in the center of the San Antonio project that is roughly 4,000 meters in diameter. A chargeability anomaly that is approximately 1,000 meters north-south and 800 meters east-west occurs within the boundaries of the assumed intrusive body and is consistent with signatures seen with porphyry-hosted disseminated sulfide mineralization.

Figure 4. Depth slices with chargeability data highlighting the Cosmos porphyry copper-molybdenum-silver-gold drill target. The top of the IP anomaly is within 10 meters of surface and is present to the bottom of the survey limits at ~250m depth.

The Barksdale technical and permitting teams are currently designing a first pass drilling campaign that will seek to make a discovery at Cosmos. Barksdale intends to provide guidance early in 2020 with respect to anticipated drilling timeframes, once the appropriate documentation has been submitted to the relevant permitting agencies for review.

Technical information in this news release has been reviewed and approved by Lewis Teal, Senior Consultant to the Company and a ‘Qualified Person' as defined under Canadian National Instrument 43-101.

Barksdale Capital Corp. is a base metal exploration company headquartered in Vancouver, BC, that is focused on the acquisition and exploration of highly prospective base metal projects in the United States. Barksdale's portfolio of assets is located within a world-class base metal district in southern Arizona and is surrounded by some of the world's largest mining companies.

ON BEHALF OF BARKSDALE CAPITAL CORP

CAUTIONARY STATEMENT REGARDING FORWARD-LOOKING INFORMATION: This news release includes "forward-looking information" under applicable Canadian securities legislation including, but not limited to, the existence of a potential shallow porphyry copper deposit on the San Antonio project and the Company's initial drill target thereon. Such forward-looking information reflects management's current beliefs and are based on a number of estimates and assumptions made by and information currently available to the Company that, while considered reasonable, are subject to known and unknown risks, uncertainties, and other factors which may cause the actual results and future events to differ materially from those expressed or implied by such forward-looking information. Readers are cautioned that such forward-looking information are neither promises nor guarantees, and are subject to known and unknown risks and uncertainties including, but not limited to, general business, economic, competitive, political and social uncertainties, uncertain and volatile equity and capital markets, lack of available capital, actual results of exploration activities, environmental risks, future prices of base metals, operating risks, accidents, labor issues, delays in obtaining governmental approvals and permits, and other risks in the mining industry. In addition, the regional proximity and similarity of the Cosmos drill target to certain large porphyry copper deposits in the Patagonia mountain range is not necessarily indicative of the mineralization on the San Antonio property. There are currently no NI 43-101 resources or reserves on the San Antonio property. All forward-looking information contained in this news release is qualified by these cautionary statements and those in our continuous disclosure filings available on SEDAR at www.sedar.com. Accordingly, readers should not place undue reliance on forward-looking information. The Company disclaims any intention or obligation to update or revise any forward-looking information, whether as a result of new information, future events or otherwise, except as required by law.