NEW YORK, NY / ACCESSWIRE / November 15, 2019 / VastHeyday, a research practitioner of blockchain integrated Internet cultural content industry, will officially release VHD - an enterprise friendly distributed data and content integration management public blockchain on December 15, 2019. Built on the pre-knowledge of the technological trends of Web 3.0, VastHeyday provides the consumers with various decentralized services and products within the content life cycle. VHD public blockchain integrates business level infrastructure, protocols, and distributed application services. It adopts the mainstream public chain modules in blockchain technology, and is built on the research of the core team, which give consumers and content creators the absolute rights to digital identity, data, content copyright, and encrypted assets. Today, more and more attentions have been paid to personal privacy and data asset security. The emergence of VHD can be regarded as conforming to the trend, catering to human nature, and has milestone significance in the practical application and development process of blockchain technology.

VastHeyday adopts the core architecture of "cultural content + data" & "blockchain + artificial intelligence". The foundation for its booming is the 5G which promote the explosion of Internet of all things. In the future, it will achieve two main purposes:

Data and artificial intelligence: The Internet platform establishes a user data integration incentive system in its own system. Users sign up for the right to use platform data to receive points. Points and VHD can be exchanged according to a certain proportion, which activates the enthusiasm of users and realizes the legalization and rationalization of user data used by the platform. The public blockchain of user-generated data can be freely used by the artificial intelligence industry. The application market described in this paragraph refers to millions of Internet enterprises and billions of Internet users, solving the problems of low user activity, difficult retention and high acquisition cost for new customers that Internet enterprises are currently and in the future facing for a long time. This move also brings a steady stream of users to VHD.

Team
Founding partner
xingchuan.pan - senior research expert on the application of blockchain technology and the development of Internet cultural industry

The development process and strategic planning of VastHeyday
In September and October 2019, the official website went online to complete the transferring of VHD online smart contract release currency system and wallet.

In the first quarter of 2020, the main network integrating distributed storage technology, master node fragmentation mechanism and smart contract will be online, with TPS reaching 10000 level; In addition, alliance blockchain technology is integrated into the public blockchain system, which can be used by institutions with partial private needs to achieve fully open and private data classification and reasonable storage within a certain range on the public blockchain and alliance blockchain in a set of system.

In the first half of 2020, the application, content and technology of cultural content, data assets, blockchain and artificial intelligence will be integrated.

In the second quarter of 2020, the VastHeyday Coin (VHDC) will be issued, supported by the asset guarantee of the VastHeyday foundation and the scale application of the VHD ecosystem, for the seamless transaction of on and off blockchain assets.

In the third quarter of 2020, the upgrading of the main network series will be launched to meet the application requirements of 5G Internet business era, and solve the bottleneck of data monopoly development faced by artificial intelligence.

Fund management plan:
VHD releases all partners' coins by smart contracts, and establishes a long-term community of interests guaranteed by machine smart contracts.
See the yellow book on the official website (www.vastheyday.net) for the distribution of VHDS in various sectors.

2.The incentive and upgrade mechanism for node mining has made most of the circulating coins in the market become mining nodes. 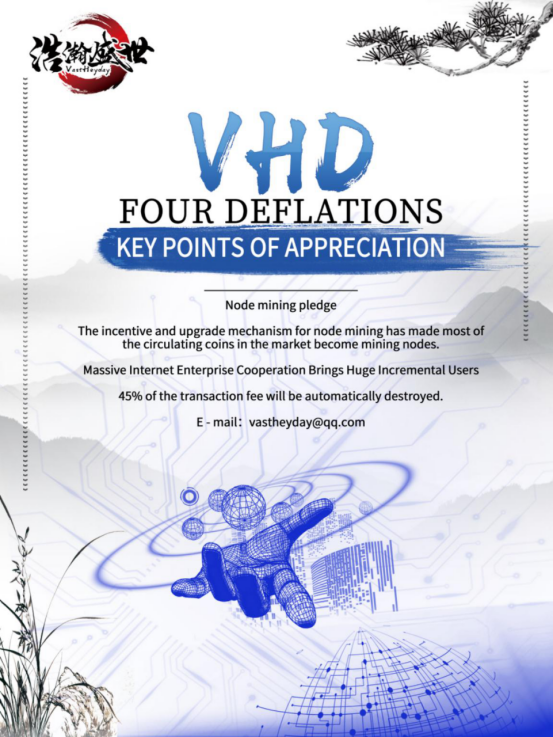 Rights and interests of foundation node:

2. Set up three-level recommendation awards, A recommends B, A obtains 20% of B's investment, B recommends C, a obtains 10% of C's investment, C recommends D, a obtains 5% of D's investment, and so on, and the awards are from reserved fund-raising; When the number of nodes in the third level below a reaches 50, 10 nodes will be awarded to a and listed as associate shareholders;
3. Enjoy the rights of foundation shareholders, and each foundation node has an average 24-month release share of the corresponding number of VHDS, and the project party will select the people with good technology and high technology from them to become shareholder partners, deeply participate in the operation decision of the project, and grant the VHD share of 100000 or even 10 million.

Deflation
After the completion of private placement, the deposit contract with the rated total amount of interest will be launched to acquire circulating coin and gain new users.

On December 10, 2019, VastHeyday's main network version 1.0 was launched online; on December 31, 2019, the exchange and public placement were completed. The first exchange chose one of Bitfinex, Bittrex, 99ex, WBFex, Hcoin. The amount of public placement was 2.1 million USDT, the unit price of VHD was 0.35 USDT, and the total number of VHDS was 6 million.