TORONTO, ON / ACCESSWIRE / November 13, 2019 / Avidian Gold Corp. ("Avidian" or the "Company") (TSX-V: AVG) wishes to report additional project developments from its 2019 summer program on its readily accessible Golden Zone property. The property is located 320 km north of Anchorage, Alaska, and approximately 16 km west of the main transportation route between Anchorage and Fairbanks.

Following up on the successful 2018 results, Avidian completed a summer field program comprised primarily of selective core relogging and soil sampling with the objective to:

i. outline a 2020 drilling program to expand and refine the existing Breccia Pipe Deposit gold resource; and

ii. define new potential gold resource targets in the vicinity of the Breccia Pipe Deposit through the delineation of drill targets adjacent to the Breccia Pipe deposit, specifically at the Mayflower Extension Zone and BLT shear zone.

Highlights of the field program are as follows.

Dave Anderson, Chairman and CEO of Avidian states "The results of the 2019 program continue to support our belief that there is excellent potential to increase the known resource in the immediate area of the Breccia Pipe Deposit. The delineation of skarn mineralization in conglomerate units that can be traced for some distance in the both the MEZ and Copper King areas suggest this style of mineralization may play a key role in contributing to increased gold resources at the Golden Zone Property. The BLT shear zone also remains of interest. The presence of gold over the strike length tested by widely spaced drill holes (800 m) raises the question of whether there may be a second source independent of the BPD feeding the BLT?"

Avidian, with the assistance of consultant Cyrill Orssich, considered an expert in breccia pipe deposits and the Tintina Belt style of mineralization, re-examined various surface exposures on the property and selected drill core from the Breccia Pipe deposit ("BPD"), the Mayflower Extension Zone ("MEZ") (Figure 1) and the BLT Zone, as well as the resource model at the BPD.

On the basis of the review it is apparent from a comparison of the high density of drilling at the BPD with the computer model which defines the resource, that the vast majority of the historical drilling converges at a depth of approximately 200 m from surface. At this depth the drill holes are almost entirely within the breccia pipe, leaving the margins of the pipe poorly defined and the enclosing mineralized monzodiorite untested, particularly in the southwest portion of the breccia body. A total of 1,560 m of drilling is proposed to test the margins of the breccia pipe and the mineralized monzodiorite on either side of the BPD.

A re-examination of selected core in the MEZ and BLT areas (see Figure 2) was completed to further refine the interpreted mineralization and define drill targets that could add additional gold ounces in the vicinity of the BPD. A soil/biogeochemical survey (Figure 3) was completed during the 2019 work program to the northeast of these zones to establish continuity of the MEZ and BLT along strike in areas of no outcrop.

The MEZ is located approximately 300 m northeast of the BPD (see Figure 2). The discovery hole, GZ17-10, returned 21.6 m grading 1.46 g/t Au in a conglomeratic unit. GZ18-02, drilled 50 m southwest of hole GZ17-10, intersected 17.7 m grading 2.12 g/t Au in similar mineralization. Core from seven holes drilled between 2005 and 2018 was re-examined and it was determined that mineralized intersections all have the same skarn/replacement style features. This type of mineralization occurs over a strike length of at least 350 m, and to a vertical depth of at least 150 m (Figure 4). Drilling has only partially tested this zone. It remains open to the northeast where gold-in-soil anomalies occur along the projected strike extension (Figure 3). Avidian is finalizing collar locations for additional drilling in the MEZ to both infill the known area of mineralization as well as to test the extension of this zone to the northeast.

The BLT Zone is a variably mineralized shear zone that can be traced over a strike length of approximately 1.5 km and cuts through the southern portion of the BPD (Figure 2). This zone has been very sparsely drill tested and also represents peripheral gold mineralization that could increase the overall gold resource in the vicinity of the BPD. Avidian's hole GZ17-03B returned 64.0 m @ 0.65 g/t Au in the BLT Zone. Core from 23 historical and Avidian drill holes was examined to determine the presence or absence of "BLT style mineralization", which consists of strong stockwork veins of fine-grained silica. This material was traced over 800 m strike length as determined from the core review. Gold anomalies in the recently completed soil survey (Figure 3) suggest that the zone continues to the northeast for at least 200 m, where it is untested by drilling. A total of 1,340 m of drilling in eight short drill holes will be required to confirm the continuity of the mineralization along strike from existing intercepts.

All drill core assays noted above are presented in core length as at this time there is insufficient data with respect to the orientation of the mineralized intersections to calculate true widths. 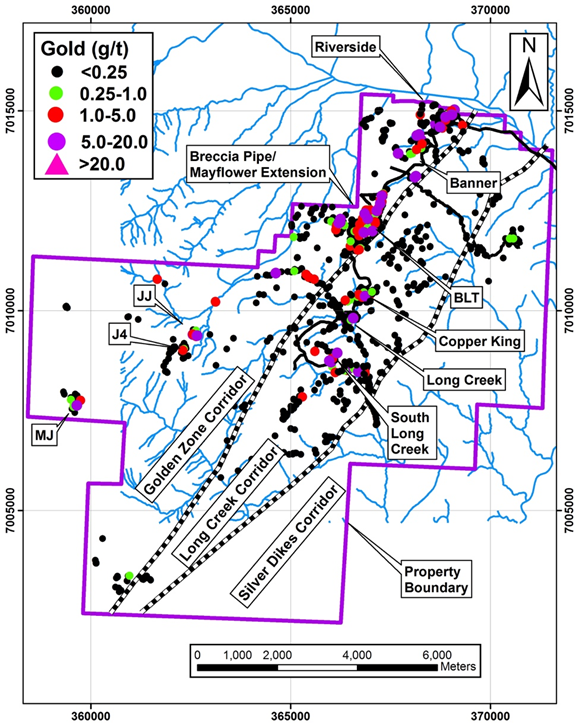 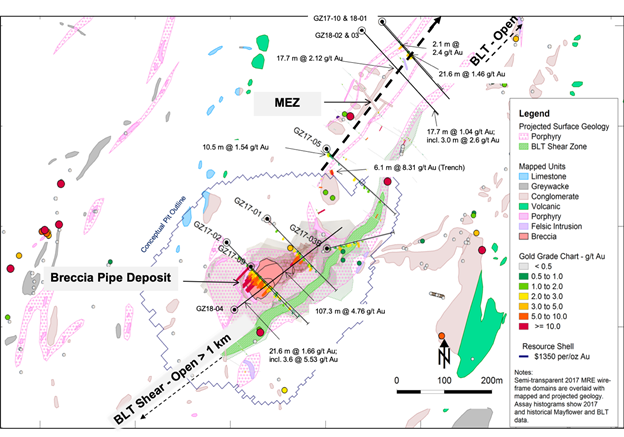 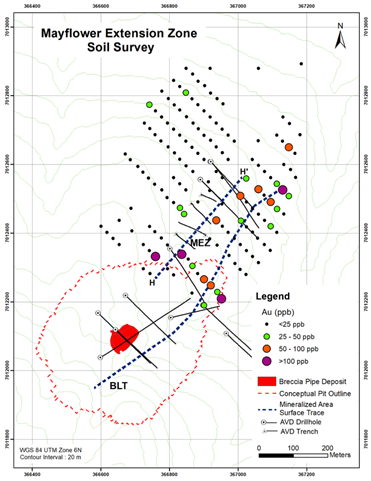 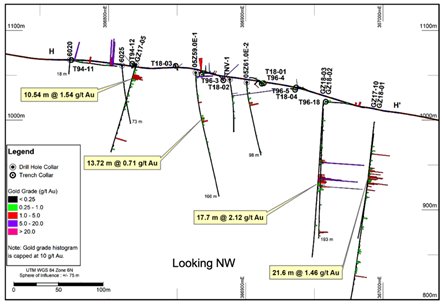 The property lies within the prolific gold endowed Tintina Gold Belt with mineralization styles on the property directly associated with Reduced Intrusive Gold Related System ("RIGRS") deposits with numerous polymetallic, gold-dominated showings contained within three fault-bounded belts or corridors. All the known mineralization is spatially associated with Cretaceous age intrusive rocks, analogous to what is observed in many of the large gold deposits within the Tintina Gold Belt. The mineralized occurrences on the project extend for well over 15 km of strike length (see Figure 1). There are several regional scale exploration targets in the central and southern portions of the property for gold-copper mineralization.

The technical information contained in this news release has been approved by Dr. Tom Setterfield, P.Geo., Vice President Exploration of Avidian, who is a Qualified Person as defined in National Instrument 43-101 - Standards of Disclosure for Mineral Projects.

Avidian is the majority owner of High Tide Resources, a private company, that owns the base metal Strickland Property, the Black Raven gold property and an option on the Labrador West Iron Ore property, all located in Newfoundland and Labrador, Canada.

Avidian is focused on and committed to the development of advanced stage mineral projects throughout first world mining friendly jurisdictions using industry best practices combined with a strong social license from local communities. Further details on the Corporation and the individual projects, including the NI 43-101 Technical report on the Golden Zone property, can be found on the Corporation's website at www.avidiangold.com.