CHENGDU, CHINA / ACCESSWIRE / October 22, 2019 / The 7th Chengdu (China) International Intangible Cultural Heritage Festival (CIICHF) concluded in Chengdu on October 22. Starting on October 17, this year's CIICHF, which explores the theme of "Cultural Inheritance and Happy Life", consisted of one main event and 28 themed parallel events. Over 1,100 intangible cultural heritage projects and 5,600 delegates from 86 countries have been invited to get involved in more than 540 events, which include the International Exhibition, International Forum, International Competition, International Performance and Interaction. The six-day festival attracted nearly 10 million visitors. 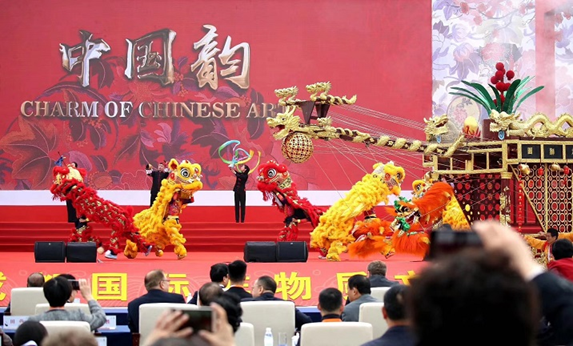 During the festival, 64 performance teams from 21 countries showcased their respective unique intangible cultural heritage projects to the audience, such as the Hawaiian Hula Dance, the Scottish bagpipe, traditional Indian dances, Lanzhou Taiping Drum, and Sichuan Opera.

Six major exhibitions - Achievements in Poverty Alleviation and Rural Revitalization through the Inheritance of Intangible Cultural Heritage, Traditional World Handicrafts, and Innovative Intangible Cultural Heritage Designs, etc. - were hosted during the festival to highlight 910 intangible cultural heritage projects from 42 countries, including Bulgarian woodcarvings, Danish paper-cut and Burmese puppets. The Traditional World Handicrafts focused on the exchange between different cultures. Ingenious works created by eight French artisans and 11 inheritors of intangible cultural heritage in Sichuan intrigued many visitors. Among them, the work "Song of Glass" is made up of a glass blast produced by French artisans and a lid made with the Chengdu silver thread technique; the Danish paper-cut "Seven Dragon Eggs" and the Shandong Gaomi paper-cut "Eight Immortals Crossing the Sea" were exhibited in the same exhibition booth so the audience could marvel at the similarities between Chinese and foreign cultures.

The Chengdu International Intangible Cultural Heritage Festival was established in 2007 and is held every two years in Chengdu, China. It is an international cultural activity aimed at promoting the protection of the intangible cultural heritage of humanity and promoting mutual learning and exchange of implementation practices among the parties to the Convention for the Safeguarding of the Intangible Cultural Heritage. It is also an international platform for friendly dialogue between Chinese civilization and civilizations around the world. Up to now, the Intangible Cultural Heritage Festival has been successfully held for 7 sessions, with more than 2,500 events, more than 8,000 intangible cultural heritage projects, and more than 500 performance teams. More than 4,000 delegates from various countries and non-governmental organizations and more than 40,000 domestic representatives attended the meeting. It has become an important festival widely recognized and actively participated by the international community. It is an important platform for Chengdu to display to the outside world and is an important support for Chengdu to build a world-famous cultural city.