CORRECTION: Yang and Buttigieg the Big Winners from Last Night’s Debate According to Twitter

CORRECTION: Yang and Buttigieg the Big Winners from Last Night’s Debate According to Twitter

This Press Release Replaces the Press Release Issued on October 16, 2019 at 4:30 PM ET. The Link in the Second Paragraph has been Corrected.

GREENVILLE, NC / ACCESSWIRE / October 16, 2019 / The Center for Survey Research (CSR) at East Carolina University shows Andrew Yang and Pete Buttigieg were the winners of the Democratic national debate held October 15, 2019, according to Twitter. Sentiment analysis was used to calculate a ratio of positive to negative tweets for each of the ten candidates and was based on more than 240,000 tweets (of which 129,019 could be categorized as positive or negative for a specific candidate) made during the hours of the debate. 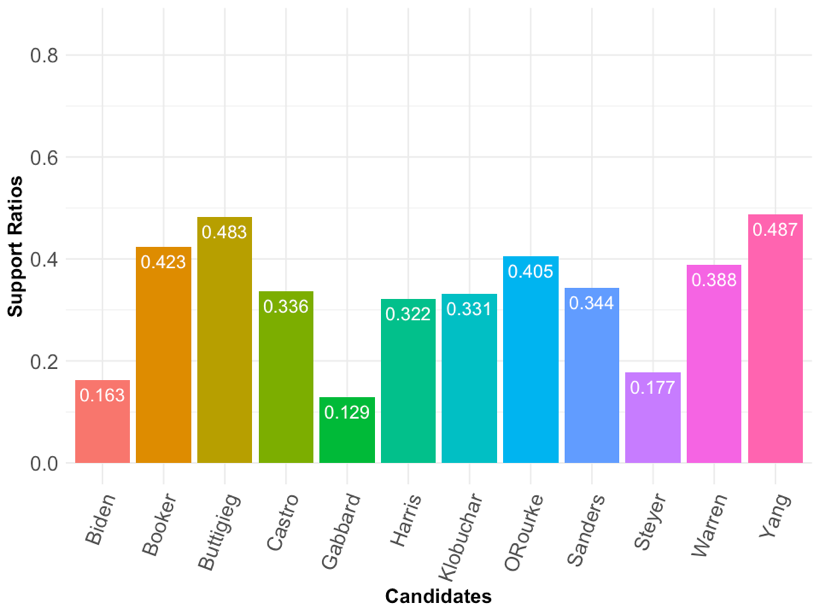 The analysis in this article is based on a collection of more than 240,000 tweets containing hashtags #demdebate, #demdebates, #democraticdebate, #democraticdebates, #presidentialdebate, and #presidentialdebates from Twitter between 8:00 - 11:00 p.m. on October 15, 2019, through twitter streaming API. To generate our results, we filtered the data so that the analysis contained only tweet texts for each of the twelve Democratic primary candidates. The analysis relied on a supervised machine learning approach (Support Vector Machine, accuracy 83.1). This required annotated training data. We manually annotated about 4,000 tweets. Five groups of students were assigned a random set of tweets and manually labeled each tweet into two classes: positive or negative. In order to check the inter-coder reliability, we examined all the labeled data again. After retrieving and filtering all the tweets about the primary debate, we pre-processed the texts to eliminate noisy data. After classifying the tweets into two categories (positive or negative), we calculate the proportion of positive tweets over the total tweets for each candidate.