Michael Hopley, President and CEO of Azarga Metals commented: "The recently completed magnetic survey covers an area four times the area previously covered by similar studies and identifies potentially mineralized horizons more than three times longer than the previously drilled strike length." He went on to say: "We also did an IP survey that revealed there could be four or five mineralized horizons where previously we thought there may be two or three. These revelations are significant for the potential scale of mineralization at Unkur!"

There is widespread glacial moraine covering approximately 90% of the Unkur license, which hampers the use of geochemical methods to identify exploration targets. Therefore, the ground magnetic survey is considered to be the best tool to "see" and map the underlying bedrock. Azarga Metals previously covered about 20% of the license area with a ground magnetic survey in 2016-2017 and this information was used successfully to guide the 2016-2017 drilling program that is the basis of the current Inferred Resource. The earlier magnetic survey data has now been merged with the recently completed magnetic survey data with a number of technical corrections made to this single database. The two surveys covered a combined 53 square kilometers.

The resulting reduced-to-pole magnetic image (Figure 1) shows the distribution of magnetic and non-magnetic rocks over nearly the whole of the Unkur license area. It was previously recognized (see Azarga Metals press release June 26, 2019) that the copper-silver mineralization zones at Unkur appear to be strongly associated with the zone between magnetic highs and magnetic lows particularly on the east side of the drill-tested magnetic anomaly. The new magnetic survey results enable this zone to be traced to the north of the resource area (labelled as "Unkur North" on Figure 1) and to the southeast (labelled as "Unkur Southeast" on Figure 1) on the southwestern limb of the Unkur syncline. This latter area was drill-tested in Soviet times, with two mineralized intercepts discovered. The magnetic pattern remains consistent in both drilled and undrilled parts of these targets extending over 10.4 km of strike length, of which only 3.1 km has been previously drill-tested by the Company.

The well-pronounced magnetic high to the west of the known mineralization seen in Figure 1 corresponds to magnetite-bearing and therefore strongly magnetic sandstones and siltstones. Re-logging of the 2016 drill core confirmed that the Unkur copper-silver mineralization sits immediately above strongly magnetic strata but immediately below non-magnetic strata, i.e., at the boundary of high and low magnetic susceptibility. The new ground magnetic data mapped several such zones of contrast between magnetic and non-magnetic rocks. These zones are interpreted as having potential for copper-silver mineralization and the Company plans to drill-test them in the current drilling program.

These zones of contrast between high and low magnetism have been shown to occur both stratigraphically above and stratigraphically below the boundary hosting the current inferred resource, i.e.it is believed that the Unkur copper-silver mineralization occurs at multiple levels within the sedimentary pile. These new zones are known as Unkur East 1, Unkur East 2, and Kemen targets (see Figure 1) which are above the Unkur stratigraphic level and are traceable for approximately 7.8 km, representing exploration targets of similar style to the one that hosts the current Inferred Resource. There are other targets in the southern part of the Unkur property that are interpreted by the Company as representing targets situated below the known Unkur stratigraphic level (see Figure 1). Most of these targets will be drill tested during the ongoing 6,000 m exploration program. 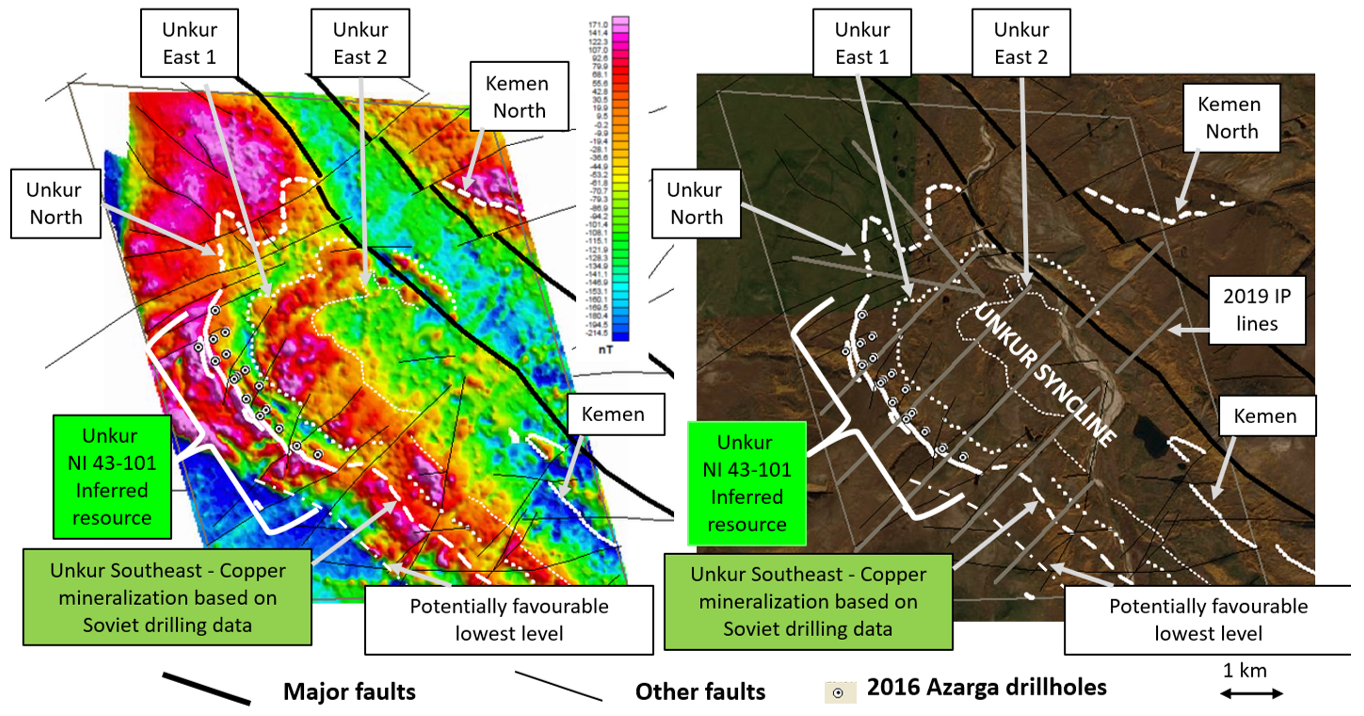 Azarga Metals has also conducted nine lines of IP survey across the limbs and closure of the Unkur syncline. The chargeability data from this survey revealed that mineralized shell of the Inferred Resource corresponds to the gradient zones between chargeability lows and highs, sometimes also occurring on top of the chargeability highs (Figure 2). This pattern can be consistently traced between the IP traverses, and the above-mentioned multiple magnetic/non-magnetic levels generally correspond well to additional gradient zones identified during the magnetic survey. 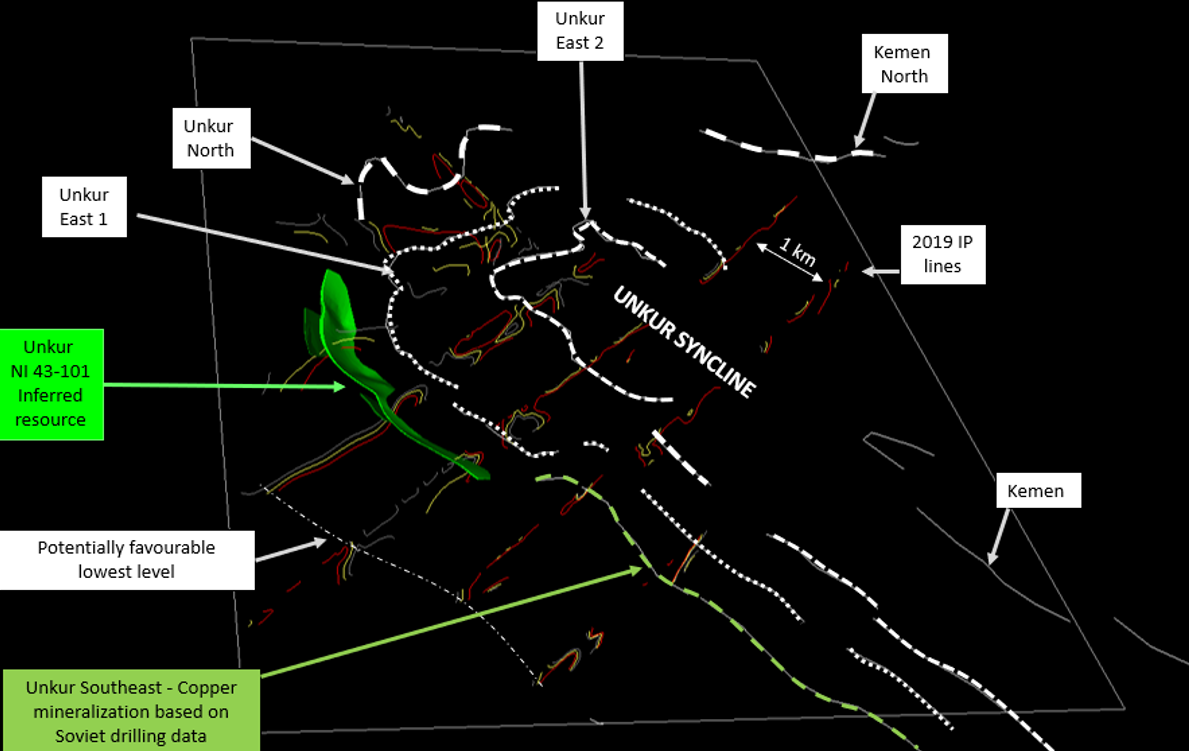 Figure 2. A north-looking 3D view of exploration targets identified on the basis of the ground magnetic survey and their position relative to the chargeability highs (red lines) and lows (gray lines). The distance between the IP traverses is 1 km. (To view the full-size image, please click here)

This interpretation indicates that copper-silver mineralization may potentially occur at four or even five stratigraphic levels, currently proven only at one level, indicating a possibility for identification of the new mineralized envelopes in the current drilling program.

Azarga Metals' President and CEO Michael Hopley, a Qualified Person as defined by NI 43-101, verifies the data disclosed and has reviewed and approved the disclosure contained in this Press Release.

Azarga Metals is a mineral exploration and development company that owns 100% of the Unkur Copper-Silver Project in the Zabaikalsky administrative region in eastern Russia. On completion of a first phase physical exploration program in 2016-2018, the Company estimated an Inferred Resource of 62 million tonnes at 0.53% copper and 38.6g/t silver for the project (see news release 15 October 2018). The Resource remains open in both directions along strike and down-dip.