VANCOUVER, BC / ACCESSWIRE / October 8, 2019 / BeMetals Corp. ("BeMetals" or the "Company") (TSX-V:BMET) (OTCQB:BMTLF) is pleased to announce the first batch of borehole analytical drill results from its underground drill program at the Company's high-grade South Mountain Zinc-Silver Project ("South Mountain" or the "Project") in southwestern Idaho, U.S.A. This batch of recently received results represents sampling of boreholes; SM19-003, SM19-005 and SM19-006 (See Figures 1 & 2). The drilling program is ongoing with further mineralized zones from other boreholes under geological logging, sampling and laboratory analysis. Further batches of borehole analytical results will be released as they become available.

Note: ALS Global completed the analytical work with the core samples processed at their preparation facility in Reno, Nevada, U.S.A. All analytical and assay procedures are conducted in the ALS laboratory in North Vancouver, BC. Reported widths are drilled core lengths as true widths are unknown at this time. It is estimated based upon current data that true widths might range between 60-80% of the drilled intersection. Intervals and included intervals cut offs are based upon visual contacts of massive sulphide units with no more than 1.35m of internal dilution.

John Wilton, President, CEO and Director of BeMetals stated, "We are pleased with this first batch of underground borehole results. They support the significant high-grade nature of the deposit, and again show the robust grades in both silver and gold associated with the base metal mineralization. Notably these results relate to boreholes drilled both above (SM19-006) and below (SM19-003/005) the Sonneman level adit in an extensive area of mineralization known as the DMEA zone (See Figure 2). This illustrates the up and down plunge potential to extend the mineralized bodies that form the deposit with further drilling to expand the high-grade resource base during future work plans.

The contacts of the massive sulphide bodies generally provide a clear visual boundary to the high-grade mineralization into either marble or skarn units. This could provide an important effective marker to guide any future mining of the deposit and limit dilution of the high-grade material.

The phase 1 drilling program is progressing well towards the goals of testing the drilling strategy and targeting from the existing underground infrastructure. It is also identifying areas of potential extensions to the mineralization."

The principal objective of the ongoing drill program at South Mountain is to test potential extensions to the mineralized zones and confirm the grade distribution of the current polymetallic mineral resource estimate. To date, the Company has completed 11 underground boreholes for a total of approximately 1,060 metres of this 2,500-metre program. Table 1 below shows the results received from; SM19-003, 005 and 006. Table 2 provides the drill hole co-ordinates, azimuth and dip.

Note: Reported widths are drilled core lengths as true widths are unknown at this time. It is estimated based upon current data that true widths might range between 60-80% of the drilled intersection. Intervals and included intervals cut offs are based upon visual contacts of massive sulphide units with no more than 1.35m of internal dilution. (Note: See details below in QA/QC section). 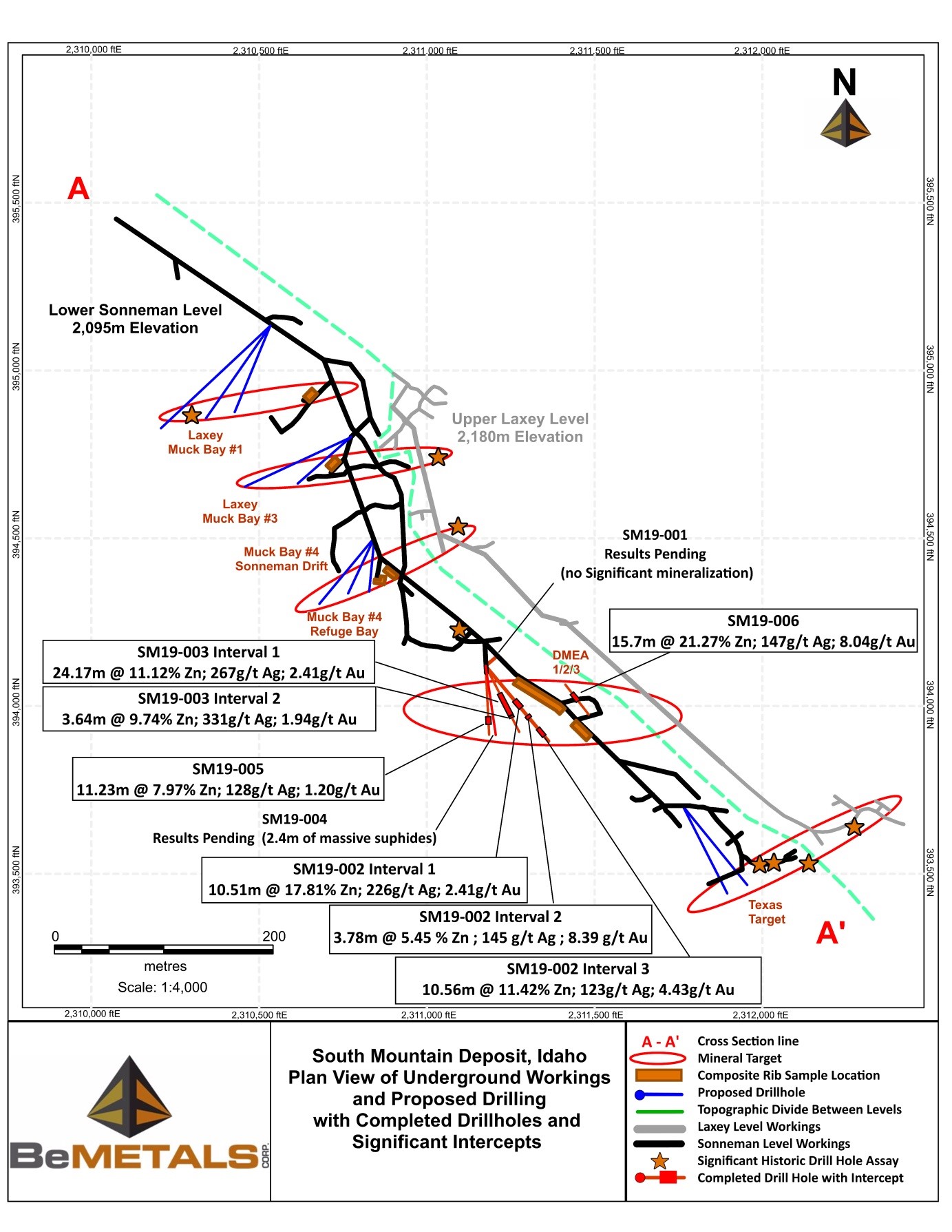 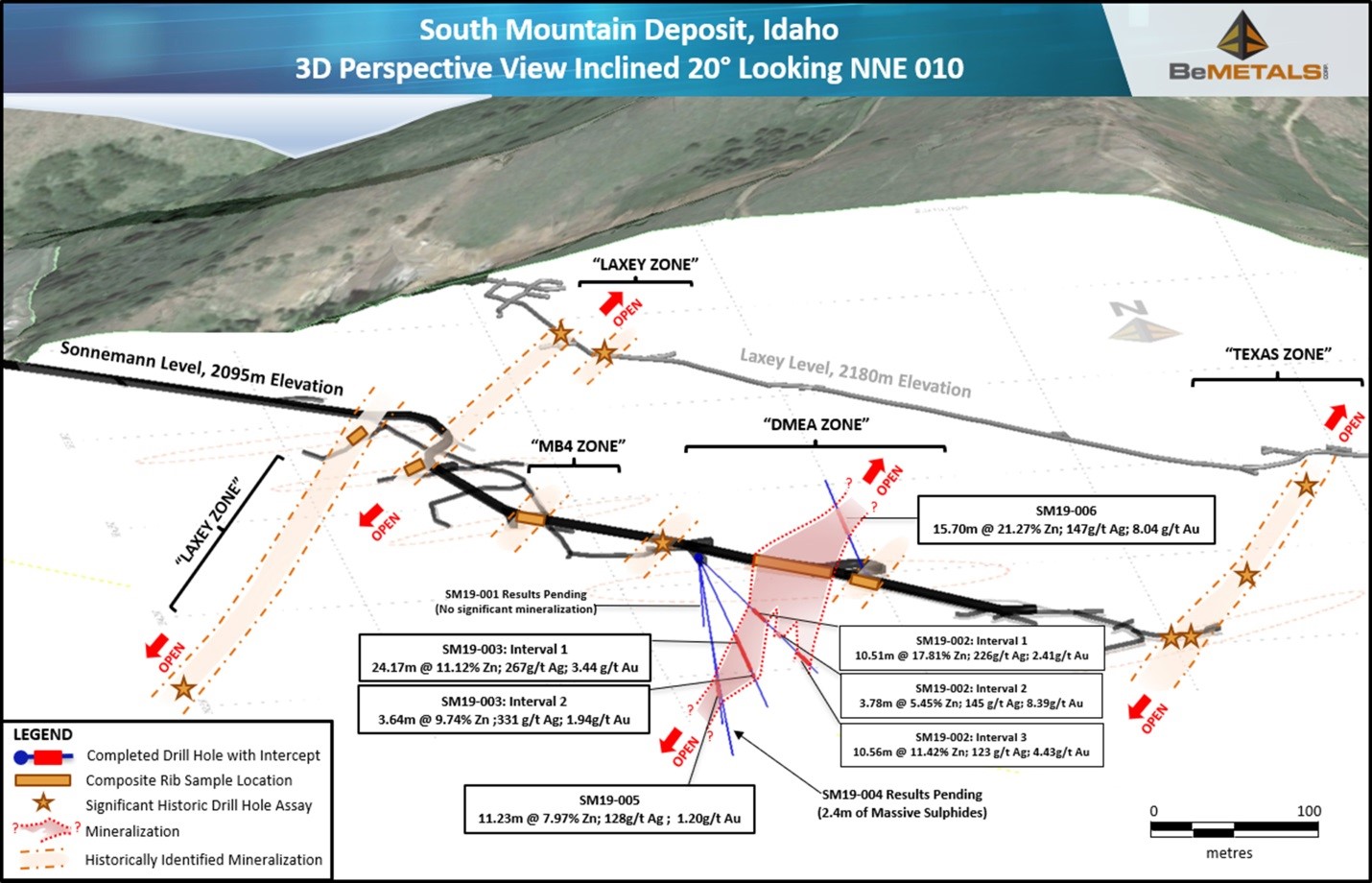 The project employs a rigorous QC/QA program that includes; blanks, duplicates and appropriate certified standard reference material. All samples are introduced into the sample stream prior to sample handling/crushing to monitor analytical accuracy and precision. The insertion rate for the combined QA/QC samples is 10 percent or more depending upon batch sizes. ALS Global completed the analytical work with the core samples processed at their preparation facility in Reno, Nevada, U.S.A. All analytical and assay procedures are conducted in the ALS facility in North Vancouver, BC. The samples are processed by the following methods as appropriate to determine the grades; Au-AA23-Au 30g fire assay with AA finish, ME-ICP61-33 element four acid digest with ICP-AES finish, ME-OG62-ore grade elements, four acid with ICP-AES finish, Pb-OG62-ore grade Pb, four acid with ICP-AES finish, Zn-OG62-ore grade Zn, four acid digest with ICP-AES finish, Ag-GRA21-Ag 30g fire assay with gravimetric finish.

The technical information in this news release for BeMetals, has been reviewed and approved by John Wilton, CGeol FGS, CEO and President of BeMetals, and a "Qualified Person" as defined under National Instrument 43-101.

South Mountain is a polymetallic development project focused on high-grade zinc and is located approximately 70 miles southwest of Boise, Idaho (see Figure 3). The Project was intermittently mined from the late 1800s to the late 1960's and its existing underground workings remain intact and well maintained. Historic production at the Project has largely come from high-grade massive sulphide bodies that remain open at depth and along strike. According to historical smelter records, approximately 53,642 tons of mineralized material has been mined to date. These records also indicate average grades; 14.5% Zn, 363.42 g/t Ag, 1.98 g/t Au, 2.4% Pb, and 1.4% Cu were realised. Thunder Mountain Gold Inc. purchased and advanced the project from 2007 through 2019, with expenditures into the project of approximately US$12M. The current mineral resource estimate of the deposit is detailed in Table 3 below and the Company expects to provide a revised mineral resource update following a phase 2 drilling program in 2020.

The Project is largely on and surrounded by private surface land, and as such, the permitting and environmental aspects of the Project are expected to be straightforward. Permits are in place for underground exploration activities and BeMetals does not anticipate significant barriers to any future development at the Project. 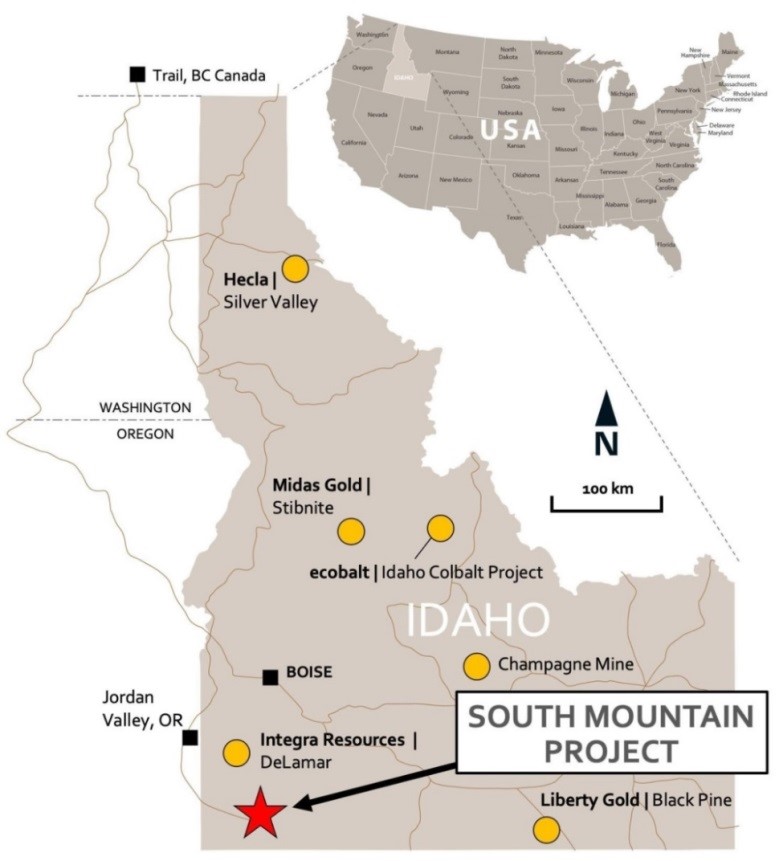 BeMetals' founding Directors include Clive Johnson, Roger Richer, Tom Garagan and John Wilton. BeMetals is a new base metals exploration and development company focused on becoming a significant base metal producer through the acquisition of quality exploration, development and potentially production stage projects. The Company is advancing both its early stage, tier one targeted, Pangeni Copper Exploration Project in Zambia, and its advanced high-grade, zinc-silver polymetallic underground exploration at the South Mountain Project in Idaho, USA. The Company's growth strategy is led by our strong Board, key members of which have an extensive proven record of delivering considerable value in the mining sector through the discovery, construction and operation of mines around the world. The Board, it's Advisors, and senior management also provide outstanding deal flow of project opportunities to BeMetals based upon their extensive network of contacts in the international minerals business.

On Behalf of BeMetals Corp.

This news release contains "forward-looking statements" and "forward looking information" (as defined under applicable securities laws), based on management's best estimates, assumptions and current expectations. Such statements include but are not limited to, statements with respect to the plans for future exploration and development of the South Mountain and Pangeni projects, and the acquisition of additional base metal projects. Generally, these forward-looking statements can be identified by the use of forward-looking terminology such as "expects", "expected", "budgeted", "forecasts" , "anticipates" "plans", "anticipates", "believes", "intends", "estimates", "projects", "aims", "potential", "goal", "objective", "prospective", and similar expressions, or that events or conditions "will", "would", "may", "can", "could" or "should" occur. These statements should not be read as guarantees of future performance or results. Such statements involve known and unknown risks, uncertainties and other factors that may cause actual results, performance or achievements to be materially different from those expressed or implied by such statements, including but not limited to: the actual results of exploration activities, the availability of financing and/or cash flow to fund the current and future plans and expenditures, the ability of the Company to satisfy the conditions of the option agreements for the South Mountain Project and/or the Pangeni Project, and changes in the world commodity markets or equity markets. Although the Company has attempted to identify important factors that could cause actual results to differ materially from those contained in forward-looking statements, there may be other factors that cause results not to be as anticipated, estimated or intended. There can be no assurance that such statements will prove to be accurate, as actual results and future events could differ materially from those anticipated in such statements. The forward-looking statements and forward looking information are made as of the date hereof and are qualified in their entirety by this cautionary statement. The Company disclaims any obligation to revise or update any such factors or to publicly announce the result of any revisions to any forward-looking statements or forward looking information contained herein to reflect future results, events or developments, except as require by law. Accordingly, readers should not place undue reliance on forward-looking statements and information. Please refer to the Company's most recent filings under its profile at www.sedar.com for further information respecting the risks affecting the Company and its business.