Variety Reports Oscar-Winning Songwriter "Leo Robin Helped Usher in the Golden Age of Song in Film": The Hollywood Walk of Fame Should Now Usher in New Leadership! Honor Its obligation to Install "#LeosLostStar" Awarded to him over 29 Years Ago

Variety Reports Oscar-Winning Songwriter "Leo Robin Helped Usher in the Golden Age of Song in Film": The Hollywood Walk of Fame Should Now Usher in New Leadership! Honor Its obligation to Install "#LeosLostStar" Awarded to him over 29 Years Ago

SHERMAN OAKS, CA / ACCESSWIRE / October 29, 2019 / On September 30, 2019 Variety, the premier source of entertainment news, featured an article by Ray Trakin, titled, "Thanks for the Memory: How Leo Robin Helped Usher In the Golden Age of Song in Film." Mr. Trakin's article begins by citing songs of Robin's that Hollywood stars chose as their signature or theme song stating, "His impressive catalog includes signature tunes for Maurice Chevalier ("Louise"), Jeanette McDonald ("Beyond the Blue Horizon"), Bing Crosby ("Please," "Zing a Little Zong"), Dorothy Lamour ("Moonlight and Shadows"), Jack Benny ("Love in Bloom"), Eddie Fisher ("One Hour With You"), Carmen Miranda ("Lady in the Tutti Frutti Hat") and Marilyn Monroe ("Diamonds Are a Girl's Best Friend")." Mr. Trakin credits Robin with helping turn Hollywood into what it is today with "his legacy (that) just happens to define the modern sound era of motion pictures."

Leo Robin's wife, Cherie Robin, wanted to see to it in her lifetime that her beloved husband, Leo, would be acknowledged for the legacy that Mr. Trakin reported on in his article. In 1988, both Cherie Robin, and actor, Bob Hope, sponsored Leo for a posthumous star on the Hollywood Walk of Fame. But all too soon after that, Cherie was diagnosed with a terminal illness. Tragically, Cherie Robin never received the good news about Leo's star because she passed away on May 28, 1989, a little over one year before the letter from the Hollywood Chamber of Commerce was sent out on June 18, 1990 announcing that her husband had been awarded the star. As a result of these ill-fated circumstances, Leo's star was never installed. On July 6, 2017, Leo's grandson discovered Leo's long-lost star when he stumbled upon it on the internet. When, later that day, the grandson called the Hollywood Chamber and spoke to Ms. Martinez, he told her about his discovery of Leo's long-lost star; she officially confirmed it was true and said, "Nothing like this has ever happened before."

Almost two years later on May 23, 2019, Ashley Lee from the Los Angeles Times first broke the grandson's serendipitous discovery in her story, "Leo Robin never got his Walk of Fame star. Now his grandson is fighting for it." When, more than 29 years ago, the acceptance letter was mailed to Mrs. Robin (deceased) and subsequently returned to sender, Ms. Lee reported what happened, "The envelope was returned to its sender and has since remained in the Chamber of Commerce's records." She also tweeted, "at first I didn't believe that Leo Robin's star had really slipped through the cracks" with a photo of that acceptance letter and the envelope stamped "RETURN TO SENDER." The Hollywood Chamber made no attempt to notify the co-sponsor, Bob Hope, who has four stars on the Walk. In a press release issued by Leo Robin Music on June 26, 2019, the following was said about the Hollywood Chamber, "What the Chamber did after the letter was (marked) "Return to Sender" was not customary practice but smacks of disregard for the individuals honored by the Walk of Fame Committee."

In his crisp and inimitable style, Mr. Trakin tells the story of how Robin would find his way out of the steel-mill towns of Pittsburgh to a one-room flat in Greenwich Village to chase his dream of becoming an actor. However, before Leo had the chance to become an actor, he had won fame as a lyric writer. He worked on eight Broadway shows between the years of 1926 and 1928, "breaking out with "Hallelujah!" from the smash musical "Hit the Deck," which went on to be covered by a number of jazz artists, including Fats Waller," says Mr. Trakin.

Mr. Trakin tells about when Leo first came to Hollywood, "In 1928, Robin was recruited by Hollywood as a certified "hit-maker" at the dawn of the sound era, hired by Paramount Pictures, and paired with Richard Whiting [...] for the studio's first musical, "Innocents of Paris," released in 1929, which also marked the American debut for French crooner Maurice Chevalier. The dapper entertainer's U.S. career was launched with what would become his signature song, "Louise," featuring those memorable Leo Robin lyrics… 'Every little breeze seems to whisper Louise'."

Like Maurice Chevalier, many young actors including Bob Hope, Jeanette MacDonald, Bing Crosby, Dorothy Lamour, Marlene Dietrich, Betty Grable and Marilyn Monroe got their big break when they were given a Robin song to sing. There were other stars that went out and adopted Robin's songs as their theme song such as Jack Benny with "Love in Bloom" and Eddie Fisher with "One Hour With You." On The Bing Crosby News Archive website on November 19, 2015 appears the "Spotlight On Leo Robin," where the archives document, "One of the songwriters that shaped the career of Bing Crosby the most in the early years was Leo Robin. Together with Ralph Rainger, Robin wrote some of the most memorable songs of the [...] 1930s." 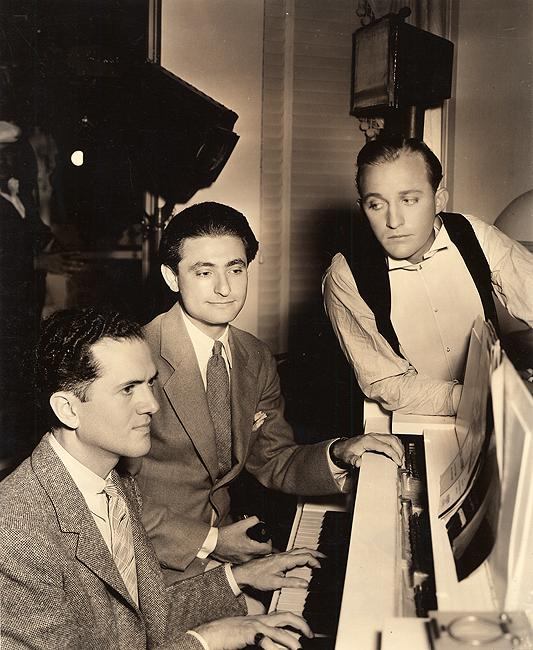 From right to left: Actor Bing Crosby with the famous Paramount songwriting team, Leo Robin and Ralph Rainger, rehearsing their brand new songs -- "It's June in January," "Love Is Just around the Corner" and "With Every Breath I Take" -- to be featured in his new film Here Is My Heart in 1934 and all three songs went on to become jazz standards

Mr Trakin, who is a rock aficionado and has seen his share of iconic moments, reminisced about some of Leo Robin's inspired iconic moments, "The song ("Diamonds Are a Girl's Best Friend") became an enduring pop culture staple when Madonna borrowed its imagery for her "Material Girl" video, while (Marilyn) Monroe did the same for "Thanks for the Memory," when she tacked it on to her steamy birthday salute to President John F. Kennedy at New York's Madison Square Garden. Other iconic Leo Robin-inspired moments include James Brown tackling "Prisoner of Love" just before splaying to his knees at the famed T.A.M.I. Show at Santa Monica Civic Auditorium in 1964."

The only people who appear to under-appreciate him are the officials at the Hollywood Chamber. In a press release issued by Leo Robin Music on July 30, 2019, the following was said about the Hollywood Chamber, "What a strange twist in irony; the (Hollywood) Chamber, which administers this famous sidewalk landmark and usually assists honorees, performed the opposite of its mission and public expectations. Instead of assisting, the Chamber obstructed installation by ignoring emails for a whole year and failing to honor its promise for the Walk of Fame Committee to consider the grandson's request for the star to be placed on the Hollywood Walk of Fame." The Hollywood Chamber, by not honoring the decision of the 1990 Walk of Fame Committee, which was presided over by the Chairman Johnny Grant who signed the acceptance letter addressed to Mrs. Robin, has depreciated itself and this world-famous Hollywood landmark.

With this inappropriate conduct, it's time for The Hollywood Chamber to face the music and usher in new leadership with an attitude which harkens back to the good old days of Johnny Grant. We remember those good times when the Hollywood Walk of Fame had Grant's solid leadership like the Rock of Gibraltar. We will never forget upon the passing of Grant on January 9, 2008 when many dignitaries in the community expressed their sympathies, like Mayor Antonio Villaraigosa who said, "Angelenos will always remember Johnny as the heart of Hollywood Boulevard, the dignified guardian of its gilded prestige and the human shine behind every one of its stars..." Today we miss Grant's leadership; since his loss, the Hollywood Chamber no longer has his moral authority and, in turn, the Hollywood Walk of Fame no longer has a protector watching over this once prestigious sidewalk.

Roy Trakin is a pop culture critic, pop and rock music aficionado, published author, TV pundit, radio show host and online talk show host. He has also been quoted extensively as a music and entertainment business expert on CNN, A&E, VH1 and MTV. He graduated from Colgate with a degree in philosophy, then received an MFA in Film from Columbia, where he studied under legendary film critic Andrew Sarris.

He is a voting member of the Rock & Roll Hall of Fame and the MTV Video Music Awards, as well as one of the writers asked to vote on Rolling Stone's 50 Greatest Albums of All Time.