The Phase One Program began June 12 and extended to July 3, 2019. During the program, 184 soils samples were collected in the John Henry prospect which is located on the north end of the Pellaire claims. In 2007 Zelon Chemicals contracted Aeroquest International to fly an AeroTEM II helicopter-borne time-domain electromagnetic and magnetic survey over a small portion of the Pellaire project. The survey was flown at 100 m line spacing in a N-S flight direction. Nominal EM bird terrain clearance was 30 m. This survey entailed 89-line kms. In contrast to the southern portion of the block, most of the northern portion of the block (John Henry) shows high amplitude and conductive EM responses. The sources of this response are generally interpreted to be related to conductive horizons within the Taylor Creek Group sedimentary rocks. The EM response is formational in nature, with high time-slice amplitudes and x-component responses typical of several closely spaced and shallow dipping (or flat lying) conductors. The area is of interest since there are significant horizons of gossan visible from the air, therefore some responses in this area may be attributable to massive sulphide mineralisation*.

As a first pass prospecting tool, three soil lines were completed over the airborne defined conductor trends. One-kilometer lines were oriented north to south at 400m line spacing and soils were collected at 25-meter intervals along the line. Samples collected are defined as b-soils and were collected using hand tools at a targeted 20-cm depth.

In addition, two more soils lines were completed to the west (West John Henry). This area is off the 2007 completed airborne survey however, ground Mag completed during Phase One showed a strong magnetic response resulting in a circular anomaly. These two soil lines were completed along north to south lines over the Mag anomaly. 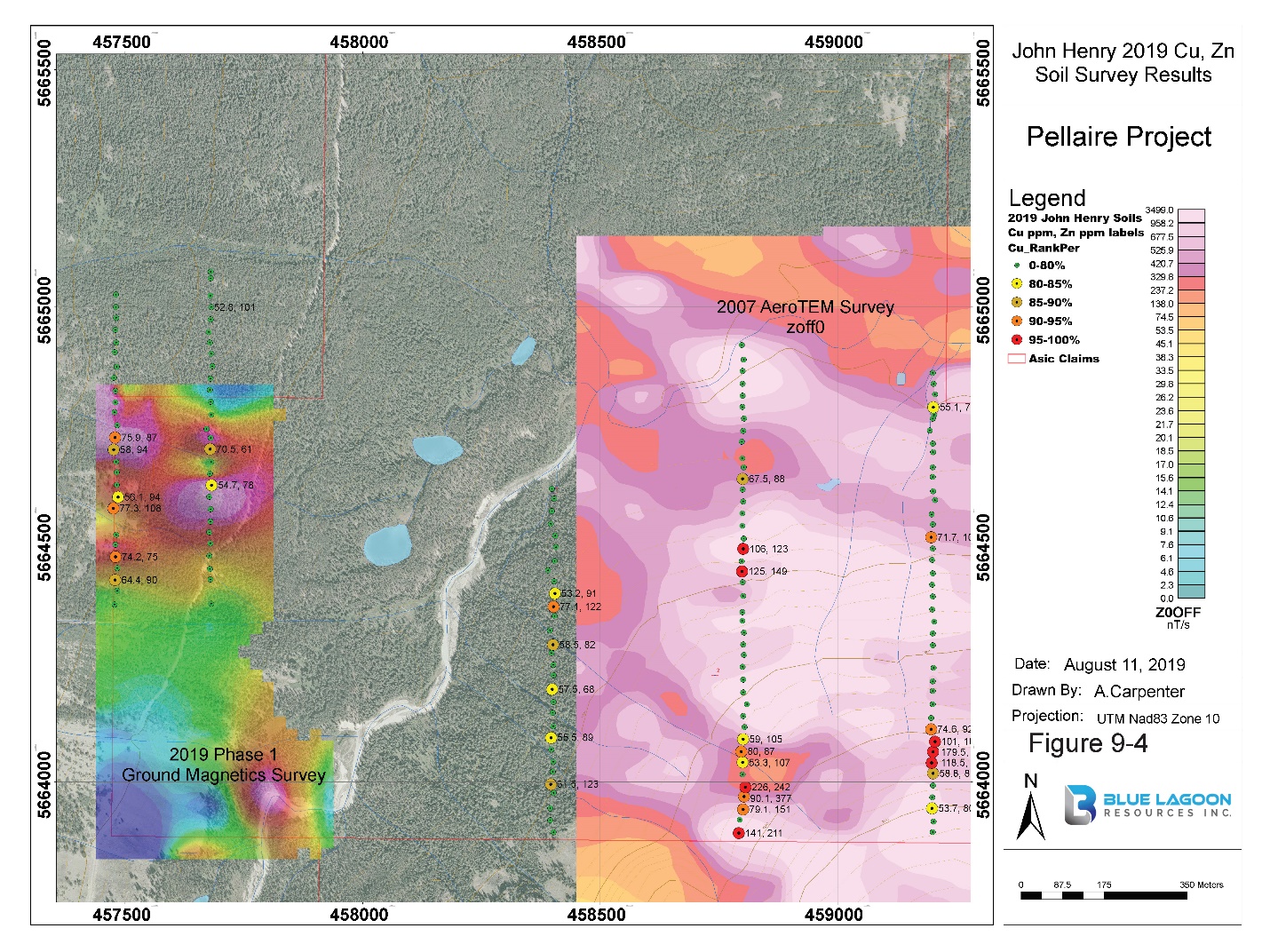 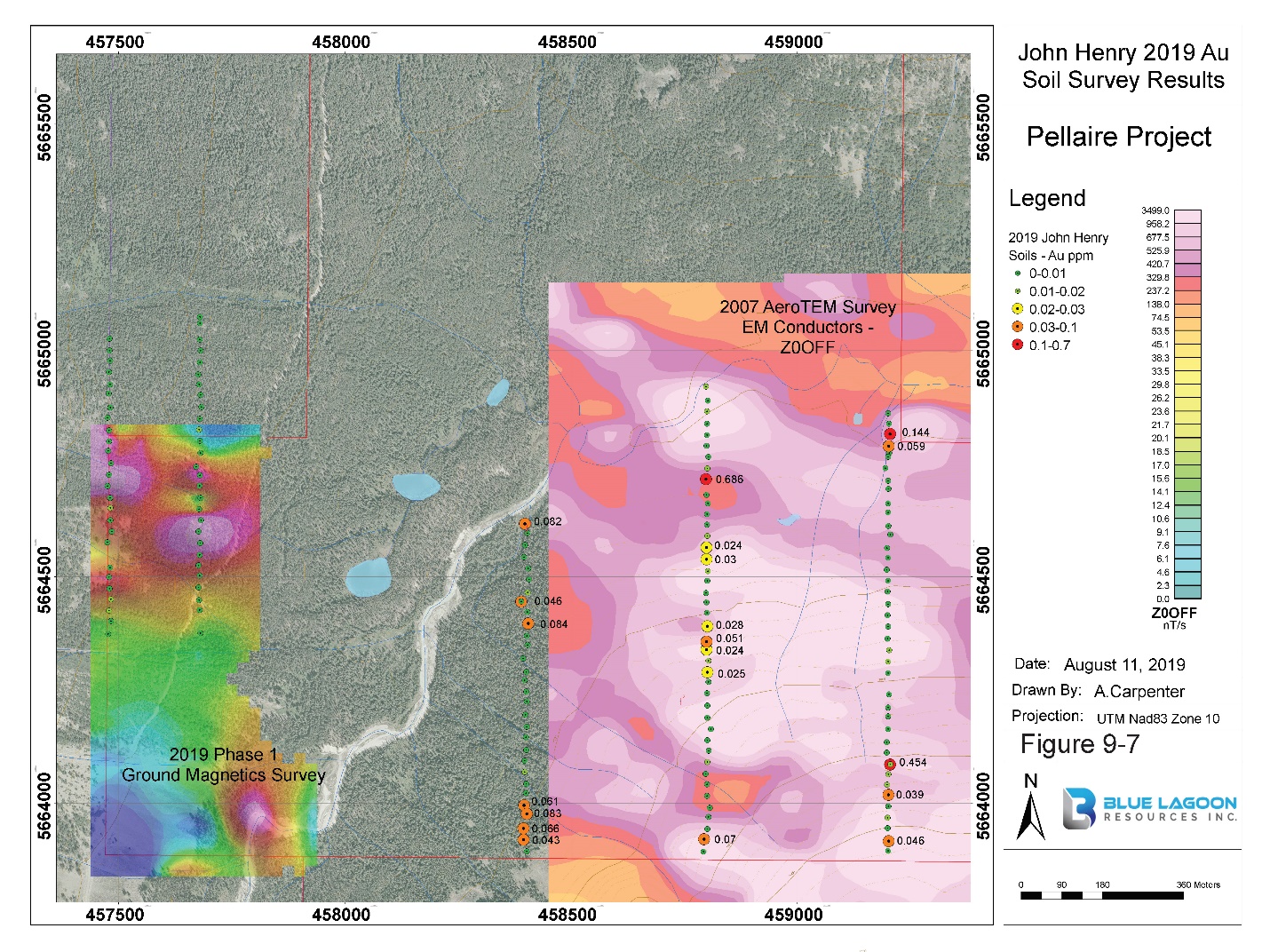 Soil sampling over the 2019 magnetic highs returned anomalous copper and zinc values. Several significant copper and zinc anomalies were also identified along the three eastern soil lines, with up to 226 ppm copper in soil, and appear to be spatially associated with magnetic & EM anomalies identified by the 2007 airborne survey (figure 1).

Significant gold anomalies were also identified by the 2019 east John Henry soil survey and appear to follow a WNW-ESE trend like that of the EM conductors. Gold assays of up to 0.686 g/t were returned from soil samples collected in 2019 (figure 2).

Approximately 0.5 to 1.0 kg of material was placed in a Kraft wet strength paper bag. Each bag included the appropriate sample number on each side and a sample tag inserted.

Samples were returned to the camp and stored separately on a screen off the ground in closed storage shed until dried. Once dried the samples were placed in a labeled and number rice sack. 10% of all soil samples taken are inserted QA/QC samples including a field duplication (cone and quartered in the field), standards and blanks. The standard material used for the soil sampling program was the Oreas 600, an Ag-Cu-Au high sulphidation ore standard, and blank material was locally purchased packaged sand.

Soil samples were transported and delivered to ALS in Vancouver by the project geologist. Soils samples were prepared for analysis using ALS's PREP-41. Analysis was performed by using ME-MS61 (four acid 48 element) and AU-AA23.

The results of the soils collection during the Phase One program at Pellaire highlight the potential for mineralization on the John Henry prospect. Blue Lagoons primary focus at Pellaire is the granodiorite hosted vein-hosted gold-silver potential on the central Pellaire claims however, results from the 2007 airborne survey allude to the fact that underlying conductors highlighted in the volcano-sedimentary Taylor Creek Group rocks may offer further exploration targets in the future.

The Phase One soil sampling on the John Henry prospect shows enough anomalous values to warrant further follow-up including in-fill soils, more ground Mag and a ground IP survey to be completed (after work permits are obtained) in 2020. More soils in particular should be completed to allow for a more detailed analysis of statistical data.

The scientific and technical data contained in this news release was prepared and reviewed by William Cronk, P.Geo., a non-independent qualified person to the Company. Mr. Cronk is responsible for ensuring that the geologic information provided in this news release is accurate and acts as a qualified person pursuant to National Instrument 43-101 - Standards of Disclosure for Mineral Projects.