SAN FRANCISCO, CA / ACCESSWIRE / September 12, 2019 / For the sixth consecutive year, ICON will host the Silicon Valley High-Tech Community Innovation Week from September 18th to the 27th, in San Francisco. The event is expected to host nearly 450 participants from around the world, including Israeli founders of promising startups, venture capital partners and high-tech corporations. 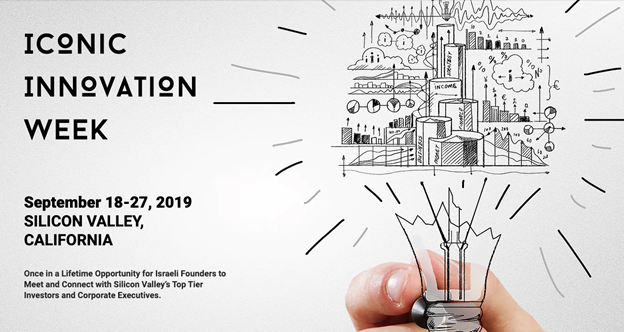 At the heart of Innovation Week will be the flagship event of ICON, the annual conference that will host top players in the global high-tech scene. The keynote speakers will be Eric Yuan, CEO of Zoom who was named one of the 52 influential high-tech influencers of Business Insider in 2017, and Dick Costolo, former CEO of Twitter and other high-tech giants, who eventually became a consultant for the hit series Silicon Valley.

Alongside the keynote event, a series of sessions were organized on hot-button topics of the global high-tech community. The topics were selected by leading investors and executives in the Valley. Leading off will be an “Investors Panel” with Oren Zeev, CEO of Zeev Ventures, Effie Epstein, Director of Ashton Kutcher's Sound Ventures, and Sarah Tavel, a partner in the Benchmark Capital Fund. In addition, there will be a session on the "Future of Money" - giving a broad perspective on the crypto world with a focus on the launch of the new ‘Libra’ coin on Facebook. A ‘“Future of Transportation” panel will be led by prominent leaders in the transportation and autonomous vehicle industries. Some of whom are also at the forefront of key MedTech and AgriTech industry initiatives.

The main conference will be part of a 10-day “Innovation Festival” that will focus on Israeli technology which will take place throughout the Silicon Valley area. A myriad of diverse events will be held throughout the week, including a cyber conference in which dozens of senior executives from the world's leading companies are expected to attend and participate alongside Israeli entrepreneurs of leading cyber startups. Nir Tsuk of Palo Alto Networks will be the keynote speaker for this conference.

Alongside these mega-events, dozens of smaller gatherings, including organized dinners, are expected to take place and hosted by ICON. These smaller events will allow for mingling between Silicon Valley VC’s, corporate executives, and Israeli entrepreneurs. In addition, ICON will offer Israeli entrepreneurs 60 personal meetings with partners in foundations, senior corporations as well as former entrepreneurs aiming to mentor and create business relationships.

All events are free of charge but require advance registration and approval by a committee. The ICON community operates on the "Pay It Forward" method and asks its members to be active partners in the community and to contribute their experience and ability to the other members.

Yasmin Lukatz, Founder and CEO of ICON on the continual success of the event after 6 years: "Year after year the demand for the Israeli entrepreneur has only risen. We are proud to put a spotlight on the startup nation's amazing entrepreneurs and connect the State of Israel to values such as innovation and success.”

"When you come to the United States, you don't have a network and you find yourself facing a market that simply has different rules," says Lukatz. "As an Israeli, you didn't get to study with key American professionals at school, you didn't play sports with them at the same university to have gotten the chance to build important bonds. The most difficult problems Israeli entrepreneurs face are overcoming cultural gaps and reaching customers. I want to put Israeli entrepreneurs in the same room as their American counterparts in order to give them a competitive edge that is based on the tremendous success of Israelis who have already made it here. For years we have been walking hand in hand and supporting those who have come to the Valley. Now it’s time to turn these resources and knowledge available for those who are still in Tel Aviv.”