ZUG, SWITZERLAND / ACCESSWIRE / August 30, 2019 / Velas AG is pleased to announce the launch of two new cryptocurrency wallets, enabled by the Velas blockchain. Velas is the world’s first blockchain powered by artificial intuition, providing it with unprecedented levels of productivity and security. The new wallets will provide users with instant, secure cryptocurrency transactions in web browser and desktop versions.

The Velas web wallet allows users transact cryptocurrencies, buy Velas (VLX) tokens, and see a detailed history of all wallet transactions, all within their web browser. Logon credentials have an additional layer of security with 2-factor authentication.

The web wallet enables the creation of wallets using mnemonics, creating a unique seed based on a generated string of words. In case the user loses their login credentials, they can restore the wallet by simply entering the mnemonic phrase.

All data stored in the web wallet is encrypted with the RSA-256-CBC algorithm, ensuring the data is protected against theft or misappropriation by system owners or external attackers.

A standout feature of the web version is that users can specify cryptocurrency transfers in any currency of their choosing. The wallet is continually updated with the current VLX exchange rates against all fiat currencies. 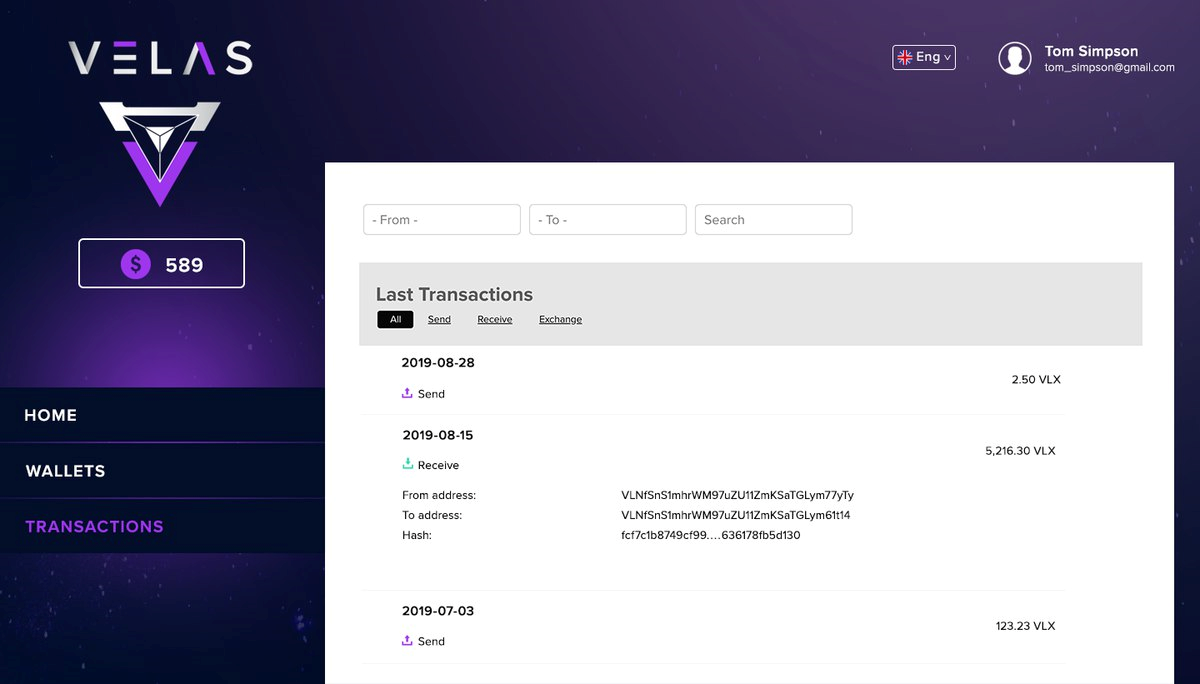 The Velas desktop wallet is a highly secure wallet program that runs on Windows, macOS, and Linux operating system. The desktop version of the wallet also uses the same mnemonic seed phrase feature and RSA-256-CBC encryption algorithm as the web version.

However, whereas the web version is an online wallet, the desktop version enables users to store their wallet directly on their computer. Using the desktop version of the Velas wallet, users are protected against online attacks, including phishing, IP spoofing, and XSS. The web version also offers users the ability to configure the wallet to lock automatically. After a set period of inactivity, the program will require a password to regain access.

Alongside the web and desktop wallets, Velas is also launching a node staking feature. This feature will allow users to stake their VLX tokens on the right of any particular node to participate in the formation of blocks in the next production era. Nodes that are successful in becoming block producers will distribute 80 percent of their block rewards to the users who correctly predicted their election.

The node staking feature helps to develop the Velas network and motivate more users to hold VLX tokens through the potential of earning rewards by staking. Whereas other delegated proof-of-stake blockchains suffer from the challenge of centralization, Velas aims to use node staking to broaden the pool of token holders and active network participants. In doing so, the platform avoids the risk of centralization and develops a flourishing ecosystem of engaged users.

The web and desktop wallets, along with the node stakers feature, are now live on the Velas network.

About Velas
Founded by CoinPayments CEO Alex Alexandrov, Velas has developed a platform that delivers instant, interoperable transactions and uninterrupted block formation. Velas stands for Virtual Expanding Learning Autonomous System and is a delegated proof-of-stake blockchain enabled by artificial intuition. Unparalleled durability and increased tolerance mean that the Velas blockchain is unique within the field of distributed ledger technology, opening up a new era in e-commerce and the global economy.