SHERMAN OAKS, CA / ACCESSWIRE / July 30, 2019 / The Hollywood Chamber of Commerce has broken its own rules to obstruct installing Leo's long-lost star ("#LeosLostStar") that was awarded to the lyricist, Leo Robin, 29 years ago. Leo Robin Music is saddened to hear that the Marilyn Monroe statue that sat atop a gazebo on the Hollywood Walk of Fame was stolen on June 17, 2019, coincidentally falling on the 29th anniversary, June 18, 1990, of the star awarded to Robin. Jule Styne and Leo Robin wrote the jazz song, "Diamonds Are a Girl's Best Friend," that was famously performed by Marilyn in the 1953 film Gentlemen Prefer Blondes and went on to become her signature song. It's a strange irony to see similar misfortunes on the Hollywood Walk of Fame have befallen the symbols, statue and star, of the singer and writer of this classic. 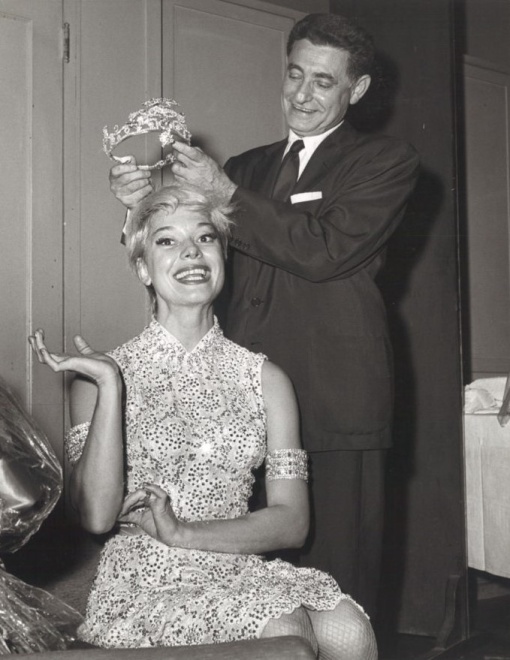 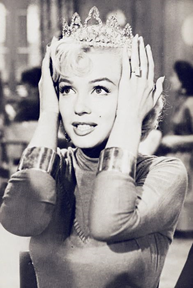 Left: Leo Robin crowns the diamond tiara on Carol Channing, who always called him Uncle Leo, during the run of the 1949 Broadway smash hit Gentlemen Prefer Blondes, which introduced her to Broadway. Right: Marilyn Monroe wore a diamond tiara in a scene from the 1953 film Gentlemen Prefer Blondes, where she rendered an iconic performance of "Diamonds Are a Girl's Best Friend" which went on to become her signature song.

Ashley Lee from the Los Angeles Times first broke on May 23, 2019 this intriguing story, "Leo Robin never got his Walk of Fame star. Now his grandson is fighting for it," about his grandson's, Scott Ora's, serendipitous discovery of Leo's long-lost star. Leo Robin's wife, Cherie Robin passed away slightly more than one year before the letter was sent out from the Chamber announcing that her husband had been awarded the star and so, unfortunately, it was never installed. Unlike the Chamber, Mrs. Robin played by the rules, Ms. Lee reporting what the grandson said, "she took the time, she followed all the rules. My grandmother did everything right except live long enough."

It has been two years, another anniv., since the grandson discovered on July 6, 2017 that Leo's long-lost star existed and ever since, the grandson has been "tangled in a still-unresolved back-and-forth with the Walk of Fame to get it set in stone," Ms. Lee reported. These multiple annives. are no cause for celebration but a call for action. After speaking with Ms. Martinez on this day and learning that Robin was awarded this star back in 1990, the grandson followed her instructions strictly. On July 11, 2017, he emailed Ms. Martinez, as she’d requested, a letter addressed to the Walk of Fame Committee, explaining what had happened and requesting that Robin’s 1990 posthumous star be placed on the Hollywood Walk of Fame, along with the official documents from Hillside Memorial Park to verify the date of his grandmother’s demise, proving she was no longer living when the notification letter was mailed to her.

Throughout the next year, the grandson never heard a word from Ms. Martinez despite initiating contact with her, repeatedly, via emails and phone calls but to no avail. Finally, on July 10, 2018, he emailed her again and that same day, almost exactly one year since he had last heard from her, he received an email from her. What a strange twist in irony; the Chamber, which administers this famous sidewalk landmark and usually assists honorees, performed the opposite of its mission and public expectations. Instead of assisting, the Chamber obstructed installation by ignoring emails for a whole year and failing to honor its promise for the Walk of Fame Committee to consider the grandson's request for the star to be placed on the Hollywood Walk of Fame.

An unjust history of Leo's long-lost star seems to be repeating itself. We remember what happened more than 29 years ago when the acceptance letter was "Return to Sender." The Chamber made no attempt to notify the co-sponsor, Bob Hope, who was one of the most famous entertainers in the world at the time. In a press release issued by Leo Robin Music on June 26, 2019, it said this about the conduct, "What the Chamber did after the letter was "Return to Sender" was not customary practice but smacks of disregard for the individuals honored by the Walk of Fame Committee."

After the loss of a year and the start of a conversation via emails between the grandson and the Chamber, it appeared as if the induction of Robin's star was moving forward. On July 17, 2018, Ms. Martinez requested, "when you would like to do the ceremony and once you give me a date we can move forward." On July 19, 2019, pursuant to Ms. Martinez's request, the grandson sent her the date he selected in 2019 for Robin's star ceremony, April 6th, his birthday, along with a check for $4,000, the fee that his grandmother and Bob Hope, the co-sponsors, had originally agreed to pay back in 1988.

Almost two weeks later on July 23, 2018, the discussion would break down when Ms. Martinez sent his letter to her back to him along with the check and wrote, "I received your check for $4,000 which [I] am sending back to you. The approval of Mr. Robins (sic) star lapsed many years ago. It would need to be reinstated by the Walk of Fame Committee, which will next meet in June 2019." Leron Gubler, President & CEO of the Hollywood Chamber of Commerce, chimed in, "The earliest this can be done is at next year’s Walk of Fame Committee meeting in June 2019." On July 30, 2018, Mr. Ora emailed Ms. Martinez, "To think that, after all of this, you would ask me to wait yet another year to have the Committee consider reinstating the star to Leo at their next meeting in June 2019 is beyond the pale."

In the Sunday print edition of The Times issued on May 26, 2019, midway in the article "A Walk of Fame star still in limbo," Ms. Lee posed this question to the Chamber, "It’s been decades since Robin was named to the Walk of Fame...what would it take to get the star installed? Martinez explained that Robin would need to be reinstated by the current committee at the next annual meeting. She didn’t anticipate problems with that part of the process." This was all, apparently, an insincere PR stunt being the grandson never heard a word from the Chamber since the meeting took place in June 2019.

It was understood from the very beginning that Robin would get the traditional ceremony. "A ceremony or the fanfare that comes with the event which is why we do this," Ms. Martinez said emphatically in an email on July 10, 2018. Mr. Ora emailed her on July 12, 2018 to confirm his desire to have a ceremony and he enthusiastically said, "I look forward to proudly attending the ceremony to celebrate my grandfather's star with my family...We would love to be given the opportunity for the Hollywood, Broadway and jazz communities to come together...to celebrate this joyous occasion." At this time back when the grandson chose a date for the event, the ceremony was all but certain.

Johnny Grant, who was named honorary mayor of Hollywood for life, hosted hundreds of ceremonies for celebrities inducted into the Hollywood Walk of Fame with the unveiling of the new stars on the Walk. According to The Times, he told a reporter in 1997 about the ceremony that has become a part of the tradition of getting a star, "Why don't we really put on a big show when we have a Walk of Fame ceremony. We had planes fly over, bands, etc." The ceremony rule, #2 on the application, provides that the "nominee guarantees to be present at the dedication ceremonies on a date and time mutually agreed upon with the Walk of Fame Committee."

The Chamber floated a proposal through Ms. Lee, unbeknownst to her at the time, she would be the messenger. Ms. Lee reported, "At one point, it was suggested that Robin's star be installed without the expensive fanfare, which would bring the cost closer to $10,000. But Ora says he feels Robin deserves the usual ceremony -- celebrating a star on the Walk of Fame is as much a part of the honor as the star itself." After two years of demanding a dedication ceremony, the Chamber abruptly changed course and now wants to duck its duty and deny Robin this long-standing tradition. Ms. Lee reported what Ms. Martinez said, "The fact that [Ora] wants us to place the star and do the ceremony, we just can't do it. We want to work with him, but he's gotta work with us." While the Chamber is playing ducks and drakes with the grandson, they're squandering time, their prestige and reputation.

Bob Hope, who has four stars on the Hollywood Walk of Fame and sponsored Robin for a star, and Grant, who has two stars himself and was Chairman of the 1990 Walk of Fame Committee and signed the acceptance letter addressed to Mrs. Robin, are championing, cheering and smiling down on the Chamber to honor the decision made by the Committee to award Robin a star. Grant was proud of his mission in life of bringing the Hollywood story to everyone and in 1987, the town's centennial year, he told Times columnist Jack Smith about Hollywood, "It's a magic word all over the world." There is no more time for the Chamber to play games with the grandson. Now is the time for the Chamber to preserve the Hollywood magic and put Leo's long-lost star in its rightful place on the Hollywood Walk of Fame!