With the launching of the Testnet, the performance of YottaChain is over 10,000 times higher than that of Internet giants

With the launching of the Testnet, the performance of YottaChain is over 10,000 times higher than that of Internet giants

Wang Donglin, founder of YottaChain and one of the Top 10 Young Scientists in China, has been devoted to researching on cryptography for over 20 years and on distributed storage for a decade. The new amazing generation of YottaChain Public Blockchain developed by him and his elite team made a debut in this conference, receiving a great amount of attention throughout the industry.

During this conference, Wang gave a keynote speech themed on "Blockchain Ushers in a New Era to meet Internet Giants Head-on" and explained how YottaChain outweighed Google, AWS, Alibaba Cloud and other Internet behemoths in terms of core indicators and cost. Meanwhile, witnessed by Vitalik Buterin, Wang announced the launching of the YottaChain Testnet. 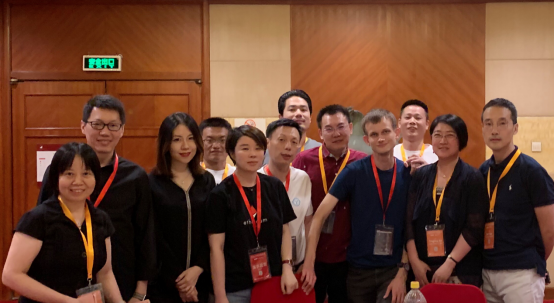 Wang also mentioned that "We launch the beta network not only to keep the promise of becoming the first storage public chain launched, but also meet the Internet giants head-on in blockchain industry to display the substantial progress of real economy transformation by blockchain. From the perspective of core technical indicators, YottaChain gives a dimension-reducing blow to Internet giants like AWS, Google, Microsoft and Alibaba Cloud in data reliability and security, service availability, disaster resilience and anti-DDoS abilities, greatly outweighing them in the aforesaid aspects."

In March, 2019, the user data of Alibaba Cloud in North China were lost due to storage failure and 94 games were disconnected as a result of cuts of optical fiber of Shanghai computer room of Tencent Cloud. Plus, at the beginning of June, AWS and Google Cloud suffered from massive failure, severely influencing a large number of clients. Puzzled by this situation, people cannot help but question why a series of problems continuously occurred in those largest IT giants even with devoted global IT elites, over a decade of rich experience, and market cap of hundreds of billions of US dollars?

Wang Donglin held that storage would be the optimal feasible application scenario of blockchain and explained the following points:

First, storage is the real economy in the digital form and its on-chain process can be totally controlled by code.

Third and most importantly, the unique "TruPrivacy" technology of YottaChain determines that as the number of storage users gradually increases, data deduplication reduces storage cost to 1/10 to 1/5.

YottaChain is the most professional storage public blockchain amid its obvious advantages in four elements-- technology, business model, economic model and governance structure, which are the foundation to measure a public blockchain.

From the perspective of technology, Wang Donglin expressed that "in several known storage public blockchains, only YottaChain is designed with data protection mechanism to guarantee data security and core technology of 'encryption and deduplication'. In theory, it has the best performance of I/O. Besides, YottaChain's data have a strong self-healing capability, thus, they cannot be destroyed even by atomic bombs. Their reliability is at least over 10,000 times higher than that of the best centralized storage around the world".

YottaChain has TruPrivacy's technology of "encryption and deduplication". It has broken the "common knowledge" in its industry and realized the zero-knowledge encryption and the elimination of repeated cross-users. In the context of ensuring users' data sovereignty, the storage cost will be reduced to 1/10 to 1/5, which was awarded a global invention patent. In DefCon, the world's largest hacking conference, TruPrivacy's server has been opened for hackers to attract with high-value cash rewards, to publicly verify its security, but nobody succeeded. This is enough to illustrate the excellence of this technology.

From the perspective of business and economic models, there is a large imaginary space for the future blockchain's storage market, including various value-added services, such as a persistent storage market with ten billions of dollars, CDN network acceleration market with billions of dollars, big data analysis of disaster resilience, etc., and an incremental market that is spurred by high-quality, low-cost infrastructure with an unlimited-capacity storage.

In terms of governance structure, Wang Donglin said that YottaChain would be more determined to take the decentralized governance strategy, let community lead the development of projects and contribute to the practice of the blockchain spirit.

By testing and launching all outstanding technical indicators via YottaChain, Testnet will be far ahead of peers in the same industry, which undoubtedly further deepens the consensus that "blockchain storage is YottaChain".

As YottaChain enters the beta stage, the public can directly see the transformations of real economy by blockchain and compare and test them with the main services provided by the world's largest companies to experience its superiority and practical value. This is not only an important milestone in blockchain storage, but also a great leap in the development history of the entire blockchain industry.