Vice Chair John Gourley (Commonwealth of the Northern Mariana Islands, or CNMI) said the Civil Beat articles implied that funding he received from the Sustainable Fisheries Fund for fish biosampling continued after he became a Council member. Honolulu Civil Beat statements about Gourley were included in a section titled "Conflicts of Interest." Gourley said he received no such funding after he became a Council member and there was no conflict of interest. He said he feels Civil Beat has possibly damaged his reputation and that of his environmental consulting business.

Council Vice Chair Michael Duenas (Guam) said it was Tom Camacho and members of the Guam Organization of Saltwater Anglers who were the driving force behind development of the American Disability Act-compliant fishing platform on Guam and not then Council member Manuel Duenas, as the Civil Beat article reported. Michael Duenas noted that then Gov. Eddie Calvo favored the platform, which made fishing accessible to the elderly, and envisioned seeking additional funding to expand it to 500 feet.

Council Chair Archie Soliai of American Samoa said Civil Beat insisted on modifying the response he submitted to the not-for-profit, web-based media to address these and other allegations against individual Council members and contractors it had made. Civil Beat would not publish that section of his response. However, it can be found on the Council's website at www.wpcouncil.org. 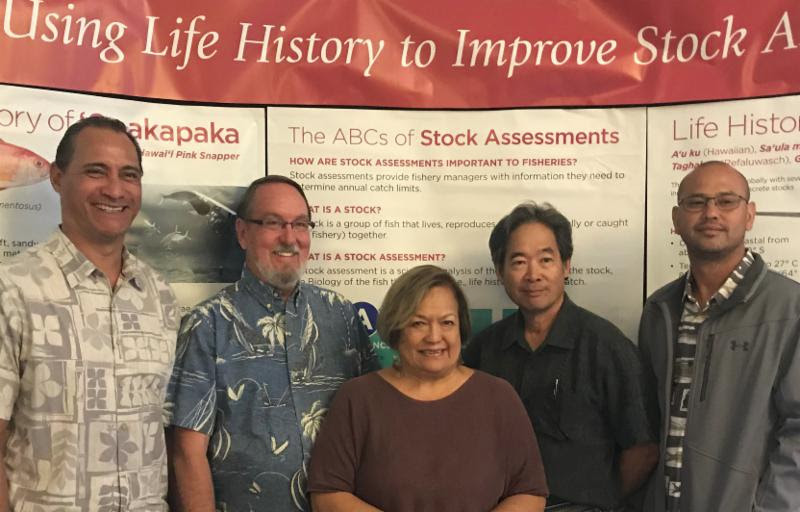 Council member Edwin Watamura said for Civil Beat to suggest that Council Executive Director Kitty Simonds had forced the State of Hawai'i to remove four of the State's Bottomfish Restricted Fishing Areas (BRFAs) was unfair. Watamura said the Hawaii Fishermen's Alliance for Conservation and Tradition (HFACT), bottomfish fishermen, State legislators and many others had advocated for opening of all of the BRFAs.

The Council will send a letter to the Hawai'i Board of Land and Natural Resources to address inaccuracies published in the Civil Beat. For example, Civil Beat reported that bottomfish "are in significant decline," when, in fact, the most recent stock assessment by the National Marine Fisheries Service (NMFS) Pacific Islands Fisheries Science Center (PIFSC) shows the stock as healthy. PIFSC Director Mike Seki has even described it as "flourishing," noted Watamura, who served for three years on a working group comprised of bottomfish fishermen, scientists and Hawai'i Division of Aquatic Resources (DAR) staff to refine the stock assessment.

The Council yesterday also recommended an annual catch target (ACT) of 25,491 pounds for Hawai'i Kona crab during fishing years 2020 to 2023. The fishery effort and participation levels have been in decline over the decades. While the 2018 stock assessment indicates a maximum sustainable yield for the commercial fishery of 25,869 pounds, recent average catches have been approximately 2,256 pounds. The no-take of female Kona crabs coupled with the minimum harvest size has deterred fishermen from entering the fishery, several members noted. Council Member McGrew Rice, a fisherman, said all the Kona crab fishermen he knows are about 75 years old. Ryan Okano, Hawai'i DAR aquatic biologist representing Hawaii Department of Land and Natural Resources Chair Suzanne Case on the Council, said DAR favors removal of the regulation forbidding the take of female Kona crabs, but the regulation was made by the Hawai'i State Legislature so would require legislative action to change. The Council reiterated its previous recommendation requesting DAR work with the Legislature in removing the no-take of female statute to allow the redevelopment of the commercial Kona crab fishery.

Additionally, the Council will encourage DAR to establish a process through Chapter 91 of the Hawai'i Revised Statutes to close State waters once the ACT of Kona crab is projected to be reached in order to attain consistency in the management of the stock between the State and federal waters. The Council will also encourage the State, as part of the Chapter 91 process, to consider bringing the monthly reporting requirement to trip level similar to the Hawai'i fishery for seven deep-water bottomfish. Under this proposal, DAR would provide the Council and NMFS monthly summaries of numbers caught, pounds caught, number of trips and number of licenses to track fisheries performance for in-season monitoring for the Kona crab fishery, relative to its ACT. The Council recommended that DAR provide similar trip reporting for uku (Aprion virescens or green jobfish) relative to its annual catch limit and that it reinitiate the collection of fishery data for crustaceans from the non-commercial fisheries as part of the certification process of the Hawaii Marine Recreational Fishing Surveys.

Regarding protected species, the Council requested that NMFS provide the Council and its Scientific and Statistical Committee the new abundance estimates for the pelagic stock of false killer whales based on a 2017 survey of the US exclusive economic zone (EEZ) around Hawai'i. The Council additionally asked for an update on the date potential for reopening the Southern Exclusion Zone (SEZ), taking into consideration the new abundance estimates for the pelagic stock. The 132,000 square mile SEZ was closed to the Hawai'i deep-set longline fleet on Feb. 22, 2019, after the fishery interacted with two false killer whales. Closure of the SEZ coupled with the Papahanaumokuakea Marine National Monument, which prohibits fishing in the US EEZ out to 200 miles from shore throughout the entire 1,200 mile Northwestern Hawaiian Islands chain, leaves only 17 percent of the US EEZ around Hawai'i open to the local longline fishery. The Council also requested that NMFS provide regular updates at future Council meetings on the status of recovery plan implementation for Pacific green turtle populations, including the outlook for considering downlisting of distinct population segments occurring in the Marianas and American Samoa.

Under the Magnuson-Stevens Fishery Conservation and Management Act of 1976, the Council has authority over fisheries seaward of state waters in Hawaiʻi and other US Pacific Islands. The Council meeting continues today through Thursday at the YWCA Fuller Hall at 1040 Richards St. The public is invited to attend. For more information, go to www.wpcouncil.org; email [email protected] or phone (808) 522-8220.