CALGARY, AB / ACCESSWIRE / June 12, 2019 / Jade Leader Corp. (TSX.V: JADE) ("Jade Leader", or "the Company") is pleased to report on its continued progress at its Wyoming Jade Fields property, where a recently completed field program has identified 5 priority targets on which application with the relevant authorities will be filed for a phase of mechanized trenching and sampling to be conducted as soon as permits are in place.

To advance its comprehensive evaluation of the district potential of the historic Wyoming Jade fields, the Company flew a high resolution, helicopter borne magnetics and radiometric geophysical survey over an area of approximately 48 square kilometers. The survey covered the Company's existing properties, and additional areas of newly recognized alterations and geology considered to be favorable for Jade formation.

The field program resulted in additional nephrite Jade discoveries at surface and led the Company to stake an additional 25 lode claims (209 hectares/516.5 acres), increasing the size of its current 4 claim blocks, and adding an entirely new block of claims to cover a new target, bringing in the Company's land package to 91 fully owned claims as well as one optioned claim.

Mr Jean-Pierre Jutras, P.Geol, the President and a Director of Jade Leader stated: "Being the first group with such a strong mineral industry background to evaluate this historical district comprehensively with modern technologies has allowed us to have a strong advantage in staking the large alteration systems within which Jade has historically been found. While there remains many further areas to expand on within the current portfolio of properties, 5 very strong targets have now been defined with sufficient confidence to move forward to mechanized trenching to test and expose the systems where Jade has historically, and continues to be been found, to begin determining system dimensions, geometries and overall stone quality distribution. Given the long history of the area in producing some of the most highly prized nephrite Jades in North America, we look forward to advancing the projects through the next phases of work as expeditiously as possible".

These 5 high priority targets for which permitting applications will be made are summarized below.

T1. The T1 target is located within a block of 38 claims (317.7 hectares/785 acres) and includes both an outcropping nephrite Jade occurrence in a zone of historical workings, as well as a long train of loose to subcropping nephrite Jade blocks at surface which outlines a target area in excess of some 600 meters of strike length. Within this target area, a portion of the Jade block trail was surveyed in detail over roughly 80 meters by 10-30 meters in width, and resulted in the discovery of 62 nephrite Jade blocks. Twenty six of these blocks were estimated by volume to be in the 20 to 100 pound range and 36 blocks in the 100 to 500+ pound range (see attached field photographs of representative pieces). These highly angular and strongly surface weathered blocks are generally considered by the Company to be the weathered surface expression of a near situ Jade seam and related alteration. The surface expression of this Jade trail corresponds to a well-defined airborne magnetic anomaly.

An application will be made to expose the T1 system through a series of 4-6 trenches/cross cuts to determine the potential width of the system at its strongest points, as well as expose unaltered material for further evaluation and classification. Jades identified to date in this environment include fine grained, dark green/olive colored material, medium to light green fine grained material as well as coarser grained, ornamental type material.

T2. The T2 target is located within the same claim block as the T1 target, in a distinct area which has not seen any historical workings. Jade was discovered in an area investigated for both high alteration visible at surface, as well as the correspondence of a large, well defined magnetic anomaly extending for in excess of 700 meters of strike length. A total of 9 small to medium sized blocks of Jade were found at surface over an area of roughly 100 meters in strike length, including a large, 150 pound block of finely textured dark green material which has been collected for further testing work, including the polishing of windows to allow for a proper evaluation of the stone's color and texture (Field photo of rough sample attached).

T3. The T3 target is located on a separate claim block, and corresponds to a large zone of strong alteration, including epidote replacement and silica flooding. At T3, numerous historical hand dug pits were found, exposing dark olive to light green near-gem Jade in fractures and along alteration contacts over a zone of alteration roughly 140 meters of strike length by 90 meters in width. Testing will focus on strongly altered zones where fine grained nephrite occurs in joint and fracture sets, as well as testing the edges of the alteration systems where coarser grained material has been found erratically exposed to date.

T4. The T4 target is another Jade producing zone similar to T3, where dark green/olive nephrite Jade has been found both in fractures and joint openings, as well as where the alteration is in contact with country rock. The extent of the alteration zones, some of which has been historically mined at a small, artisanal scale cover roughly 250 meters of strike length by 30-40 meters in width.

T5. The T5 target is another small scale past producing zone of strong alteration which corresponds well with an airborne magnetic signature extending about 350 meters in length. Past sampling at T5 has returned both coarser grained green ornamental type Jade, flower Jade and fine grained dark green/olive Jade from surface outcrops. Testing is planned to expose the area of the strongest response in the airborne magnetic signature which is currently only covered to subcropping.

Samples were collected at all target areas for confirmatory testing as well as to evaluate for workability, textures and colors.

The Company is now preparing its required permitting applications, as well as a round of follow up work at its DJ project in Washington State. Updates will be provided as timelines are finalized on these further phases of work.

Mr. Jean-Pierre Jutras, P.Geol., President of the Company, is the Qualified Person for the Company's Jade projects as
defined by National Instrument 43-101 and has approved the technical disclosure contained in this news release.

The TSX Venture Exchange has neither approved nor disapproved of the contents of this press release.

Except for the historical and present factual information contained herein, the matters set forth in this news release, including words such as "expects", "projects", "plans", "anticipates" and similar expressions, are forward-looking information that represents management of Jade Leader's internal projections, expectations or beliefs concerning, among other things, future operating results and various components thereof or the economic performance of Jade Leader. The projections, estimates and beliefs contained in such forward-looking statements necessarily involve known and unknown risks and uncertainties, which may cause Jade Leader's actual performance and financial results in future periods to differ materially from any projections of future performance or results expressed or implied by such forward-looking statements. These risks and uncertainties include, among other things, those described in Jade Leader's filings with the Canadian securities authorities. Accordingly, holders of Jade Leader shares and potential investors are cautioned that events or circumstances could cause results to differ materially from those predicted. Jade Leader disclaims any responsibility to update these forward-looking statements. 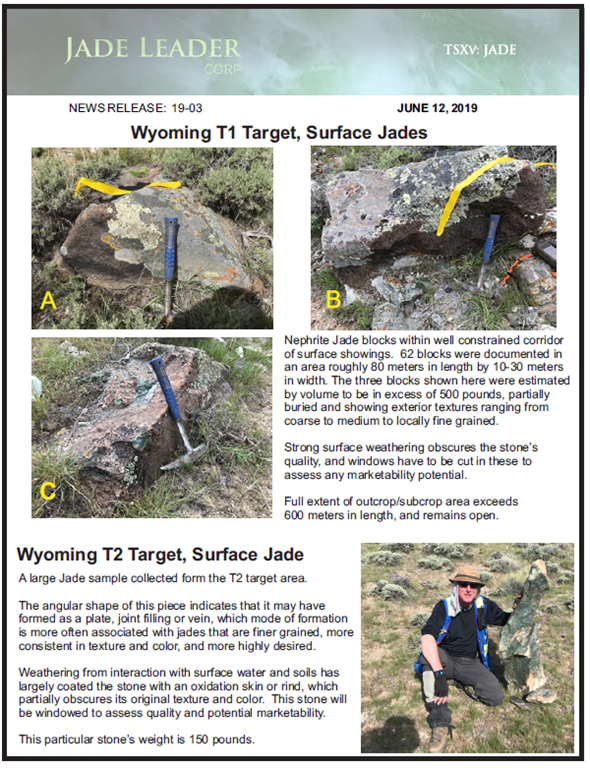