On March 20, 2019 Lexaria announced it was beginning a series of animal studies with multiple objectives, including evaluating enhanced DehydraTECH formulations that might offer improved performance. Copious data streams have been generated from these tests and continue to be analyzed.

In this arm of animal study, Lexaria tested its DehydraTECH delivery technology with compounds postulated to behave in a synergistic fashion for enhancement of gastro-intestinal absorption, which resulted in significantly enhanced DehydraTECH performance ("Enhanced DehydraTECH").

Of note, the new Enhanced DehydraTECH and its improved performance is separate and distinct from the nanotech improvement techniques recently announced by the Company.

In each arm of the Lexaria animal studies, 10 male Sprague-Dawley rats were administered an identically sourced CBD at a rate of 25mg per kg of bodyweight. Delivery of CBD into the bloodstream was measured at 2; 4; 6; 8; 12; 15; 30; 45; and 60 minutes after dosing. DehydraTECH-enabled CBD was measurable in animal blood within 2 to 4 minutes after dosing.

On May 15, 2019 the Company reported that DehydraTECH achieved a CBD blood concentration level that was 475% more than a generic industry medium chain triglyceride ("MCT") coconut-oil formulation 15 minutes after dosing. Today, the Company reports that Enhanced DehydraTECH led to 811% more CBD delivery into blood than generic industry MCT coconut-oil formulations (p=0.00008); and 110% more CBD into blood than DehydraTECH in its traditional format (p=0.02). 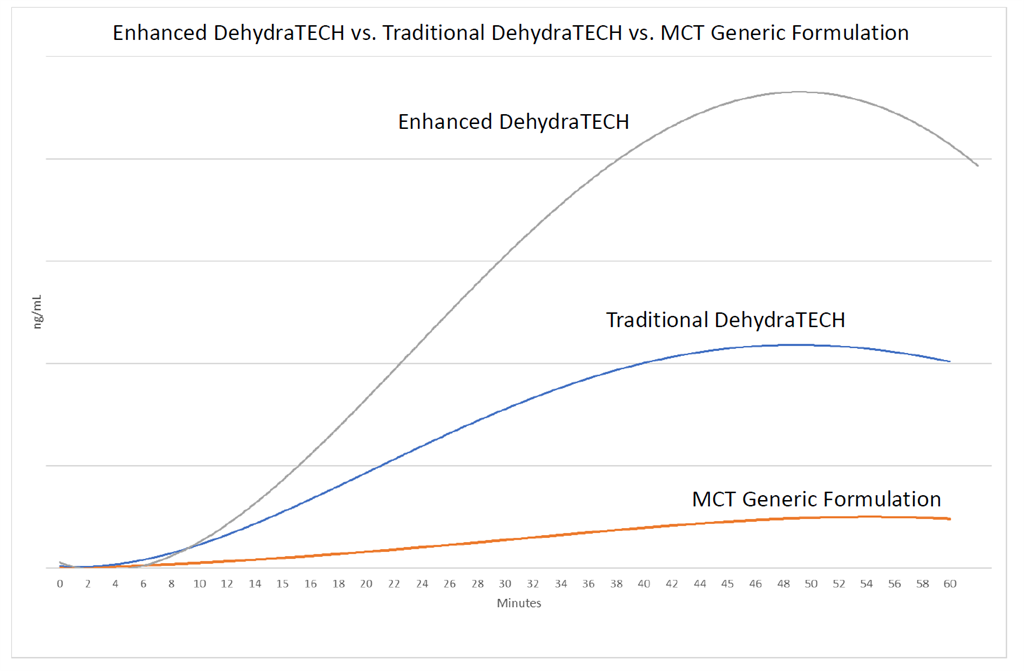 Also of note is that both traditional DehydraTECH and Enhanced DehyraTECH delivered maximum blood concentration levels prior to the 60-minute end-of-test, with levels tapering off thereafter. The DehydraTECH technology therefore demonstrates both fast onset and fast offset as tested which is of interest for dose titration purposes when repeated dosing is desired.

DehydraTECH's in its traditional format has been used commercially by the Company since 2014; and by the Company's technology licensees since 2016. Lexaria has consistently introduced leading innovation for oral cannabis formats such as capsules, beverages and edibles, with a focus on the consumer experience as measured by qualities such as taste, rapidity of onset and offset, and reliability of effect. Unique among the cannabis industry, DehydraTECH has proven itself equally transformative in other sectors such as the nicotine industry where Lexaria has licensed its technology to one of the largest nicotine products companies in the world.

Enhanced DehydraTECH seems particularly adept at delivering previously unreachable quantities of CBD across the blood brain barrier and into brain tissue; more so than even the most advanced nanotech as previously reported utilized in these studies. Since most human receptor cells of the CB1 variety and otherwise that are associated with the psychotropic effects of cannabinoids are located within the brain these findings significantly expand upon the power of Lexaria's technology to reach the target site of action for these purposes.

With this new innovation, Lexaria is establishing new performance thresholds for drug delivery technology, with tested performance of 8x (blood plasma) and more than 19x (brain tissue) of generic industry formulations. The Company intends to perform further studies to fully characterize Enhanced DehydraTECH and will work throughout 2019 to optimize implementation into the best product applications for use by its licensees.

The animal test results announced to date have led to additional new patent applications based on the positive performance results achieved. The specific nature of enhanced DehydraTECH shall remain undisclosed for proprietary reasons until the new patent filings are published. Although the current tests were limited to CBD absorption, Lexaria expects knowledge from the current innovation to apply equally to tetrahydrocannabinol (THC) as well to enhance formulation innovation for nicotine and various pharmaceutical compounds already named within the Lexaria patent suite.

Lexaria Bioscience Corp. has developed and out-licenses its disruptive delivery technology that promotes healthier ingestion methods, lower overall dosing and higher effectiveness of lipophilic active molecules. Lexaria has multiple patents pending in over 40 countries around the world and has patents granted in the USA and in Australia for utilization of its DehydraTECH™ delivery technology. Lexaria's technology provides increases in intestinal absorption rates; more rapid delivery to the bloodstream; and important taste-masking benefits, for orally administered bioactive molecules including cannabinoids, vitamins, non-steroidal anti-inflammatory drugs (NSAIDs), nicotine and other molecules.

For regular updates, connect with Lexaria on Twitter https://twitter.com/lexariacorp

This release includes forward-looking statements. Statements which are not historical facts are forward-looking statements. The Company makes forward-looking public statements concerning its expected future financial position, results of operations, cash flows, financing plans, business strategy, products and services, competitive positions, growth opportunities, plans and objectives of management for future operations, including statements that include words such as "anticipate," "if," "believe," "plan," "estimate," "expect," "intend," "may," "could," "should," "will," and other similar expressions are forward-looking statements, including but not limited to: that any additional stock warrants or stock options will be exercised. Such forward-looking statements are estimates reflecting the Company's best judgment based upon current information and involve a number of risks and uncertainties, and there can be no assurance that other factors will not affect the accuracy of such forward-looking statements. Factors which could cause actual results to differ materially from those estimated by the Company include, but are not limited to, government regulation, managing and maintaining growth, the effect of adverse publicity, litigation, competition, the patent application and approval process and other factors which may be identified from time to time in the Company's public announcements and filings. There is no assurance that existing capital is sufficient for the Company's needs or that it will be able to raise additional capital. There is no assurance that Lexaria will successfully complete any other contemplated or existing technology license agreements; or that results from any studies will be favorable or in any way support future business activities of any kind. Scientific R&D is often unpredictable and unanticipated results could emerge from any study and have a material impact. There is no assurance that any planned corporate activity, scientific study, R&D, business venture, or initiative will be pursued, or if pursued, will be successful. There is no assurance that any of Lexaria's postulated uses, benefits, or advantages for the patented and patent-pending technology will in fact be realized in any manner or in any part. No statement herein has been evaluated by the Food and Drug Administration (FDA). TurboCBD™, DehydraTECH™ technology and ViPova™ products are not intended to diagnose, treat, cure or prevent any disease.