VANCOUVER, BC / ACCESSWIRE / May 28, 2019 / Doubleview Capital Corp. ("Doubleview") (TSX-V: DBV, OTC: DBLVF, FRANKFURT: 1D4) is pleased to announce that it has received the data package of information compiled by Hudbay's technical team during the 2018 field season including the three dimensional induced polarization survey (3D IP) report, and advanced geochemical and geological data. IP survey data includes identification of two >1.2 km long vertical high chargeability targets; one of which was drilled to shallow depth in 2014 by Doubleview with the following intercepts:

3D IP (Induced Polarization) Survey:
The 2018 ground-based 3D IP survey was conducted by Dias Geophysical who employed a 100 m spaced array of electrical current injection electrodes on a grid of parallel lines spaced 250 m apart. Current injection and receiver electrodes were advanced simultaneously along five lines with 80 to 100 electrodes active simultaneously. Measurements were recorded at the approximate rate of 150 samples per second and resulting data were processed to give high quality 3D recording of chargeability response. The configuration gave detailed lateral and vertical resolution and allowed a high level of confidence in the quality of data interpretation.

3D IP (Induced Polarization) Survey - Chargeability:
The 3D IP survey data clearly identifies the near surface part of the Lisle deposit as previously determined by historic IP and geochemical data and by Doubleview's drill holes and also shows that the chargeability anomaly extends to at least 1250m vertically as depicted in the following figure: 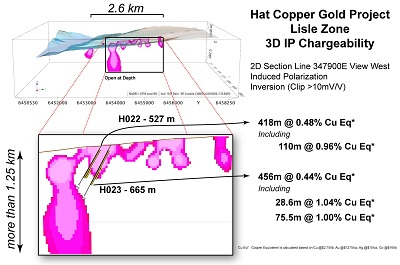 The following 3D presentation shows the extent and dimensions of anomalous chargeability bodies recorded by the 2018 IP survey of the Hat project: 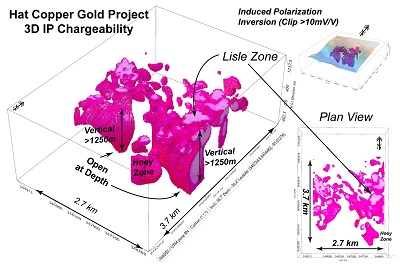 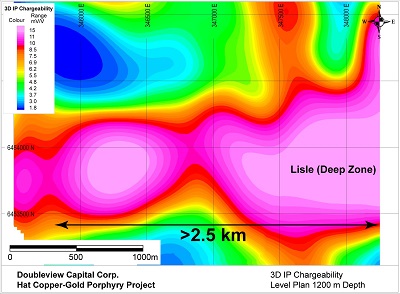 Geological and Geochemical Surveys:
In addition to the 3D IP survey, Hudbay conducted a geological review of the entire property, including 101 resampled selected drill core intervals, relogging of the majority of Doubleview's drill cores, a 433 soil sample geochemical survey, and on the basis of all available data prepared a geological model to guide further exploration. Hudbay has reported that its technical team is pleased with the results and technical merits of the Hat Copper-Gold Project following its first season of work.

Qualified Person
Mr. Erik A. Ostensoe, P. Geo., a consulting geologist and Doubleview's Qualified Person with respect to the Hat Project as defined by National Instrument 43-101 Standards of Disclosure for Mineral Projects, has reviewed and approved the technical contents of this news release. He is not independent of Doubleview as he is a shareholder of the Hat Project.

The company also announces that it has granted a total of 2,360,000 stock options to its directors, officers, consultants and employees. The options are exercisable at a price of $0.11 per share and expire five years from the date of grant.