New Token Release Methods Signal the Death of the ICO

New Token Release Methods Signal the Death of the ICO

NEW YORK, NY / ACCESSWIRE / May 22, 2019 / ICOs took the investment world by storm back in 2017. They were the crypto industry's answer to the stock market's IPO, but with some notable differences. Particularly, the projects didn't require real working products to garner investment capital.

Launching a successful ICO back in 2017 required little more than a decent idea detailed on a whitepaper accompanied by a slick website. Millions were poured into ICOs in the name of FOMO hype, and it mostly turned out to be a big mistake; the vast majority of tokens sold in ICOs are now largely worthless.

In the wake of ICO disappointment and distrust, investors and entrepreneurs alike are seeking new methods for distributing tokens based on demand, rather than through a one-time-only flash sale.

Below we detail the reasons why new distribution methods are replacing ICOs, and rightfully so:

Investments should scale as companies grow

Many companies launching ICOs in its heyday made a critical mistake by releasing the majority (often upwards of 90%) of tokens even before the token was even listed on exchanges.

Releasing nearly all tokens at the time of ICO places the vast majority of tokens into the hands of investors who are likely looking to make a quick buck, rather than in the hands of actual users or devoted fans of the products in question.

Exceptionally high market caps (calculated by multiplying the circulating token supply by the market price) used to be seen as something quite positive. But if a higher market cap is attained by shelling out more tokens to buyers with questionable intentions, it's hardly an indicator of a project's value.

In fact, these days a low market cap can actually be a great sign: especially when it's caused by limiting the release of tokens to a set fraction of the actual trading volume.

These alternative distribution methods, such as The MESG Foundation's ATD (Algorithmic Token Distribution), can help ensure that over time, tokens are released into the hands of true fans and real customers.

MESG's ATD releases a limited percentage of tokens daily, with released quantities limited to a fraction of the previous day's recorded volume across all exchanges. As trading volume goes up, more tokens are released into the hands of interested customers.

This release method allows tokens and their associated projects to grow organically, ensuring that those who purchase tokens are actually interested in the project, or better yet, want to use the tokens for their prescribed utility.

Projects which choose the ICO route typically sell large numbers of tokens to individual entities. On top of this, it's quite common for large bonuses and payouts to be paid to capital investors and to the team and founders.

Whether purchased through an ICO or attained through an airdrop or bonus payout, whales, or single investors owning a significant portion of tokens can quickly and easily cause havoc in the market, simply by selling their shares.

The more whales a project has on board, the more likely it is that one of the whales will sell a large number of tokens at once, triggering sharp decreases in token value.

Vesting schedules have been commonly used in cryptocurrency releases used to limit access to large bonuses and major payouts for a prescribed amount of time. Even those, though, typically release tokens all at once, which is simply delaying the all-too-likely price dump upon their sale.

Algorithmic release methods, such as MESG's ATO take a new approach by releasing token payouts slowly to all parties, even to capital investors and founding team members.

By limiting payouts to a fraction of the previous day's volume, large will receive the bonuses slowly over time, greatly reducing the risk of whales cashing out all at once.

It's difficult to hide the truth on a public blockchain ledger. Keen-eyed investors need only to do a bit of research to know exactly how many tokens are being released or held at any given time.

Despite an inability to hide, token issuers have typically not been transparent about exactly how tokens are being used and released, to the detriment of their investors.

The new wave of algorithmic token distribution methods opens the door to new levels of transparency and straightforwardness. An example of this is The MESG Foundation commitment to not only releasing a limited amount, but publishing daily release statistics on a public dashboard.

These released statistics can be checked anytime against public blockchain records, ensuring that the foundation is doing what they said they would do. A refreshing layer of transparency to ease the minds of investors and those using tokens for their utility. 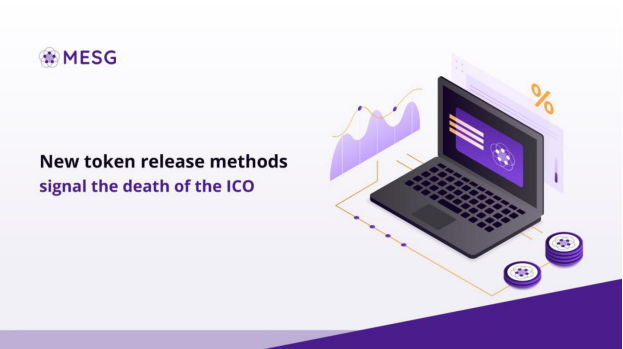 The pioneers in the new wave of token distribution methods

Solid precedent has been set for methodically releasing tokens in limited quantities over time. Ripple made headlines in 2017 by locking up 55 billion XRP in an escrow account, releasing 1 billion XRP per week, while EOS released their tokens slowly over a year-long ICO, resulting in astounding success. Both EOS and Ripple are now among the top-ten cryptocurrencies by volume.

Newer projects like MESG, still fresh out of the gate with very low circulating volumes, are taking EOS and Ripple's inspiration and are adding to it.

$MESG is being released algorithmically, with released tokens limited to a specific fraction of the previous day's actual demand, and the MESG Foundation will publish actual metrics to promote transparency. In doing so, MESG hopes to get their tokens into the hands of the right people, while setting a new standard of trust and transparency through their online ATD dashboard.

$MESG has been listed on DigiFinex , and most recently this week on BitForex . MESG Tokens are a true utility token, and can currently be used to buy and sell access to modular application components through its open decentralized marketplace.

For more details about exactly how the MESG Foundation is implementing their Algorithmic Token Distribution, head over to their website .