VANCOUVER, BC / ACCESSWIRE / May 16, 2019 / GREAT ATLANTIC RESOURCES CORP. (TSXV.GR) (the "Company" or "Great Atlantic") is pleased to announce it has received a diamond drilling permit for the Company's Golden Promise Gold Property, located in the central Newfoundland gold belt. The Company has also begun its 2019 exploration program on the Golden Promise Property, currently conducting focussed prospecting and geochemical sampling at high priority targets within the property. The drilling permit allows for up to 24 drill holes in the northern half of the property at the gold-bearing Jaclyn Zone, specifically at the Jaclyn Main Zone (JMZ) and Jaclyn North Zone (JNZ). Planned drilling will consist of the following: 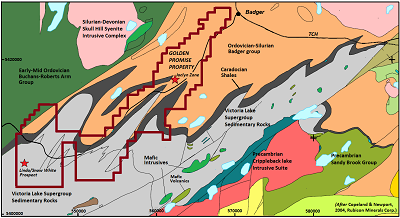 The majority of planned diamond drill holes at the Golden Promise Property will be in-fill drill holes at the JMZ to provide data for an up-dated JMZ mineral resource estimate, engineering studies and studies of mineralizing controls. Drilling is also planned testing continuation of the JNZ east along projected strike. The Company conducted trenching during 2017 along the projected east strike of the JNZ. The trenching generally failed to reach bedrock due to thick glacial till. However gold bearing quartz vein boulders were excavated from multiple trenches, with some boulder samples returning high grade gold (including 163.99, 208.51 and 332.67 g/t gold: News Release of August 31, 2017). A qualified person managed the 2017 trenching program and sampling and verified the analytical data.

Great Atlantic has begun it's 2019 exploration program on the Golden Promise Property. Prospecting and geochemical sampling is being conducted at high priority targets in multiple regions within the property. During the 2017 and 2018 programs, the Company identified / confirmed areas with gold bearing quartz vein float or bedrock; and gold soil anomalies. The objective of the current program is to further define trenching and drilling targets within these target areas.

The Golden Promise Property hosts multiple gold bearing quartz veins and is located within a region of recent significant gold discoveries. The property is located within the Exploits Subzone of the Newfoundland Dunnage Zone. Within the Exploits Subzone, the property lies along the north-northwestern fringe of the Victoria Lake Supergroup (VLSG), a volcano-sedimentary terrane. The northwestern margin of the Golden Promise Property occurs proximal to, and, in part, contiguous with a major (Appalachian-scale) collisional boundary, and suture zone, known as the Red Indian Line (RIL). The RIL forms the western boundary of the Exploits Subzone. Recent significant gold discoveries in this region of the Exploits Subzone include those of Sokoman Minerals Corp. (TSXV.SIC) at the Moosehead Gold Project and Marathon Gold Corp. (TSXV.MOZ) at the Valentine Lake Gold Camp. 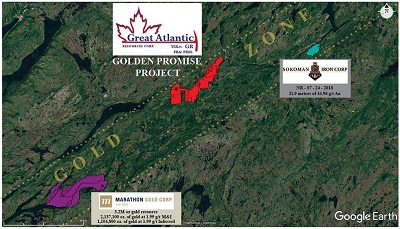 During 2018 Sokoman Minerals Corp. (TSXV.SIC) announced a high-grade gold discovery on its Moosehead Property, located approximately 40 kilometers east-northeast of the Golden Promise Property. The discovery was made during the 2018 diamond drilling program. A drill intersection of 44.96 g/t gold over 11.90 meters core length was reported including a 1.35 meters core length quartz vein intersection of 385.85 g/t gold (Sokoman Iron Corp. News Release of July 24, 2018). The Valentine Lake Gold Camp of Marathon Gold Corp. (TSXV.MOZ) is located approximately 55 kilometers southwest of the Golden Promise Property. As reported on Marathon's website, the Valentine Lake Gold Camp currently hosts four near-surface, mainly pit-shell constrained, deposits with measured and indicated resources totaling 2,691,400 oz. of gold at 1.85 g/t gold and inferred resources totalling 1,531,600 oz. of gold at 1.77 g/t. Readers are warned that mineralization at the Moosehead Property and Valentine Lake Gold Camp is not necessarily indicative of mineralization on the Golden Promise Property. 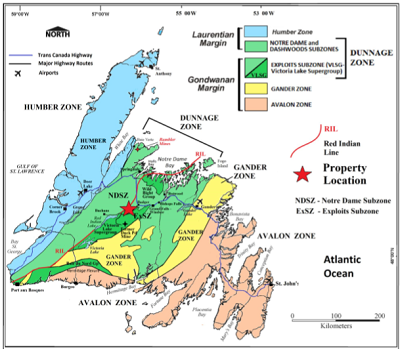 As reported in the National Instrument 43-101 Technical Report on the Golden Promise Property, Central Newfoundland (revised), dated December 4, 2018 by Mr. Greg Z. Mosher, M.Sc. App., P.Geo., and Mr. Larry Pilgrim, B.Sc., P.Geo., the JMZ was modelled as a single quartz vein that strikes east-west and dips steeply to the south. Modelled vein thickness was based on true thickness derived from quartz vein intercepts. The estimate is based on 220 assays that were composited to 135 one-meter long composites. A bulk density of 2.7 g/cm3 was used. Blocks in the model measured 15 meters east-west, 1-meter north-south and 10 meters vertically. The block model was not rotated. Grades were interpolated using inverse-distance squared (ID2) weighting and a search ellipse that measured 100 meters along strike, two meters across strike and 50 meters vertically. Grades were interpolated based on a minimum of two and a maximum of 10 composites with a maximum of one composite per hole so the grade of each block is based on at least two drillholes thereby demonstrating continuity of mineralization. For the capped mineral resource estimate, all assays that exceed 65 g/t gold were capped at 65 g/t gold. All resources were classified as Inferred because of the relatively wide spacing of drill holes through most of the zone.

On Behalf of the board of directors