COEUR D'ALENE, ID / ACCESSWIRE / May 15, 2019 / New Jersey Mining Company (OTCQB: NJMC/CSE: NJMC) ("NJMC" or the "Company") today announced its consolidated operating and financial results for the first quarter of 2019. The full version of the Company's interim consolidated financial statements and management's discussion and analysis (MD&A) can be viewed on the Company's web site, on SEDAR, and EDGAR. All amounts are expressed in U.S. dollars unless otherwise specified.

Operational Highlights during the first quarter of 2019 include:

Mr. Swallow, President and CEO stated, "Our first quarter revenue and cost of goods sold improved in comparison to last year, despite particularly difficult weather, road and ground conditions during the month of February. As we experienced more favorable weather conditions and made corporate and operational adjustments, we were able to realize record production for the month of March. Additionally, revenue from the first quarter of 2018 included the sale of gold contained in our operating circuit following the ball mill clean-out, typically performed once or twice annually, and which has not yet occurred in 2019."

As part of the mill ramp-up, we moved the drill crew back to the mill for the near-term to utilize their mill expertise. We anticipate continuing the new mill schedule and the restart of drill operations this summer."

Mr. Swallow concluded, "The improved grades in the open pit have resulted in mining fewer benches in order to ship the same amount of tonnage to the mill and production of less overall waste material. Additionally, the initial results from our column test are promising - which is a potentially positive development for the Golden Chest and the Murray Gold Belt, however the final results of the test will not be completed for a few months. We have focused heavily on our land position and strategy within the Murray Gold Belt and largely completed our district holdings during the quarter. Our updated map of the Murray Gold Belt included below demonstrates our impressive land position within this up and coming Idaho gold district." 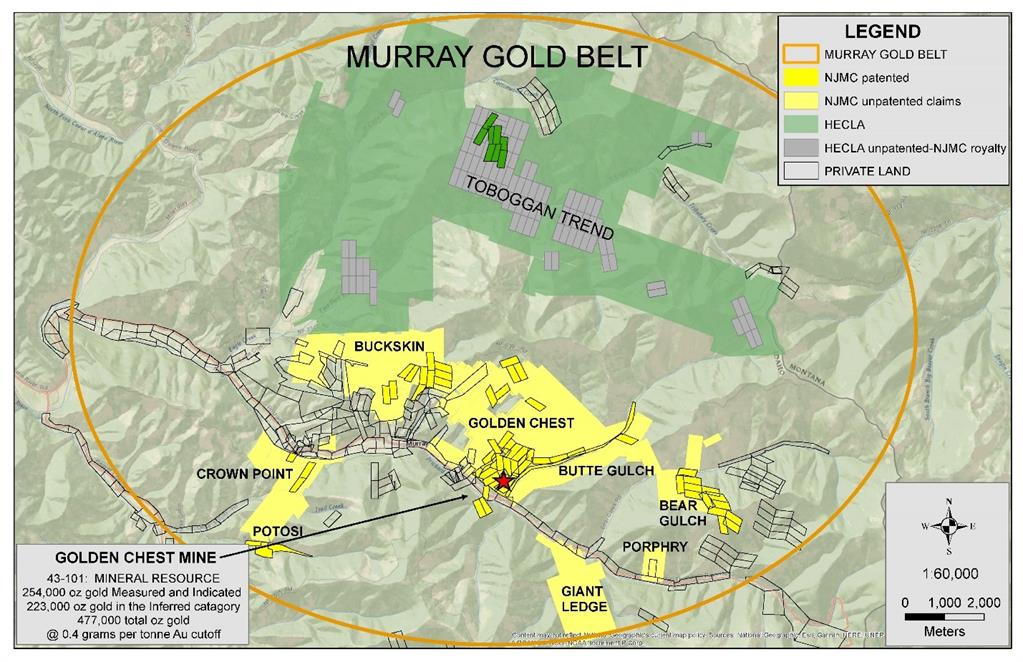 New Jersey Mining Company is headquartered in North Idaho, where it is producing gold at its Golden Chest Mine. Gold was first discovered in the Coeur d'Alene District within the Murray Gold Belt in 1879, but by 1888 mining declined as the center of activity and demand for labor shifted to the Silver Valley following the discovery of the Bunker Hill, Sunshine, Lucky Friday, and other iconic regional mines. The rebirth of the long-forgotten Murray Gold Belt has been led by NJMC, as evidenced by production from open-pit and underground operations at the Golden Chest Mine, its extensive land package and superior knowledge of the district gained from current development and production, and ongoing exploration activities.

NJMC has established a high-quality, early to advanced-stage asset base in three historic mining districts of Idaho and Montana, which includes the currently producing Golden Chest Mine. The Company's objective is to use its considerable in-house skill sets to build a portfolio of mining and milling operations, with a longer-term vision of becoming a mid-tier producer. Management is shareholder focused and owns more than 15-percent of NJMC stock.

The Company's common stock trades on the OTC-QB and the CSE Market under the symbol "NJMC."

This release contains "forward-looking statements" within the meaning of Section 27A of the Securities Act of 1933, as amended, and Section 21E of the Securities Exchange Act of 1934, as amended that are intended to be covered by the safe harbor created by such sections. Such statements are based on good faith assumptions that New Jersey Mining Company believes are reasonable but which are subject to a wide range of uncertainties and business risks that could cause actual results to differ materially from future results expressed, projected or implied by such forward-looking statements. Such factors include, among others, the Company's reinvestment in exploration and operations will result in an increase exploration and production, the risk that the mine plan changes due to rising costs or other operational details, an increased risk associated with production activities occurring without completion of a feasibility study of mineral reserves demonstrating economic and technical viability, the risks and hazards inherent in the mining business (including risks inherent in developing mining projects, environmental hazards, industrial accidents, weather or geologically related conditions), changes in the market prices of gold and silver and the potential impact on revenues from changes in the market price of gold and cash costs, a sustained lower price environment, as well as other uncertainties and risk factors. Actual results, developments and timetables could vary significantly from the estimates presented. Readers are cautioned not to put undue reliance on forward-looking statements. NJMC disclaims any intent or obligation to update publicly such forward-looking statements, whether as a result of new information, future events or otherwise.