In a New Article, the Team from InventureX Has High Words of Praise for a Reusable Straw, an Adjustable Belt and Five Other Innovative Gadgets

LOS ANGELES, CA / ACCESSWIRE / May 14, 2019 / As a partner at InventureX, the world's only seven-figure crowdfunding marketing agency, Kevin Harrington has seen his share of interesting and useful gadgets.

Recently, Harrington-who is also one of the original ''sharks'' on the hit TV show ''Shark Tank, the creator of the infomercial and the founder of the As Seen on TV brand-along with other members of the team from InventureX, named the Top 7 Crowdfunding Gadgets that people need in their homes.

To check out the full list of the seven most innovative crowdfunding gadgets, as named by the team from InventureX, please visit https://inventurex.wordpress.com/2019/05/06/7-crowdfunding-gadgets-you-need-for-your-home/. 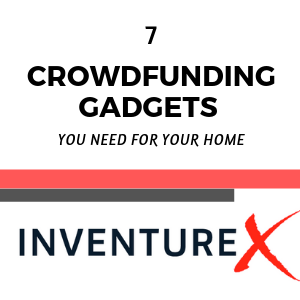 As a company spokesperson noted, the team from InventureX has helped with over 1,000 crowdfunding campaigns since 2013, including plenty of unique gadgets. While the seven gadgets listed in the new article is definitely not a complete list, it does represent a variety of crowdfunded products that can be useful in every home.

For example, the FinalStraw, a collapsible, reusable straw, is a great way for people to reduce the amount of plastic that they use, while still sipping cool drinks.

''FinalStraw is a very portable, reusable option that people can carry with them everywhere. No one is forced to give up the convenience of using a straw,'' the article noted.

Another gadget that the team from InventureX said would be useful for most people is the AlpinerX, an outdoors smartwatch. The creator of the AlpinerX capitalized on the popular smartwatch market, and invented a smartwatch that is ideal for people who spend a great deal of time outdoors.

The Smart Belt 2.0, an adjustable belt, is also a top pick from the InventureX team.

''The belt solves a very common problem, and people were eager to eat it up,'' the article noted, adding that with over 14,000 backers in just 60 days, the Smart Belt 2.0 exploded onto the scene, and they are still in high demand.

The Baubax 2.0 travel jacket; an anamorphic lens that allows people to shoot great-looking video from their smartphone; a self-cleaning litter box and a cycling power meter round out the seven innovative gadgets featured in the article.

Kevin Harrington helps entrepreneurs turn ideas into successful businesses through the use of crowdfunding . Learn more about Kevin Harrington and InventureX at https://inventurex.com/launch/.