VANCOUVER, CANADA / ACCESSWIRE / May 13, 2019 / Nexus Gold Corp. ("Nexus" or the "Company") (TSX-V: NXS, OTCQB: NXXGF, FSE: N6E) is pleased to report that it has finalized its upcoming exploration plans for its 100%-owned McKenzie Gold Project, situated in Red Lake, Ontario.

Over the past two months the Company has been reviewing historic exploration activities on and around its 1,348.5-hectare McKenzie Gold property. The project is located in the heart of the world-famous Red Lake gold camp. The highly prospective geological setting is analogous to several past producers. McKenzie hosts nine documented historical gold occurrences with limited exploration and is preferentially situated adjacent to Newmont Goldcorp on its east and northern boundaries, and Pure Gold Mining's Madsen project on the southern boundary.

The Company intends to conduct a detailed prospecting program, supplemented with ground geochemical and geophysical surveys, over the property to identify geologic trends and structures suitable for drill testing. Phase one field work (including detailed mapping and sampling), under the direct supervision of Nexus Gold senior geologist and Vice President of Exploration, Warren Robb, is scheduled to begin in the coming weeks and will extend throughout the summer months.

"We're happy to begin developing our Canadian assets," said president & CEO, Alex Klenman. "Both McKenzie, and our New Pilot property in BC, represent prospective high-grade projects, and we intend to allocate appropriate resources to expedite their development over the next several months," continued Mr. Klenman.

Historical work on the property has resulted in several significant prospecting discoveries, with high-grade samples returning up to 313 grams-per-tonne ("g/t") gold ("Au"). A new showing on the southwest corner of McKenzie Island, located in the northern portion of the project area, was also discovered and returned multiple high-grade samples ranging from 9.37 g/t Au to 331 g/t Au. This new discovery lies approximately 100 meters west of a historical showing where gold values of up to 212.8 g/t Au have been reported in provincial government files.

In 2005, Cypress Development Corp conducted a small drill program near the southern boundary that intersected a strongly silicified, sericite-altered, east-west-trending mineralized zone up to 600 meters long and open along strike and to depth. Quartz veining accompanied by sphalerite, arsenopyrite, chalcopyrite and free gold returned gold values in drill core of up to and 2.2 g.t Au over 6 meters.

Quartz veining and sulphide mineralization are also reported in multiple locations on McKenzie Island, within the northern portion of the property boundary. Sampling conducted in 2017 returned up to 18.02 g/t Au in grab samples from the vein exposure. 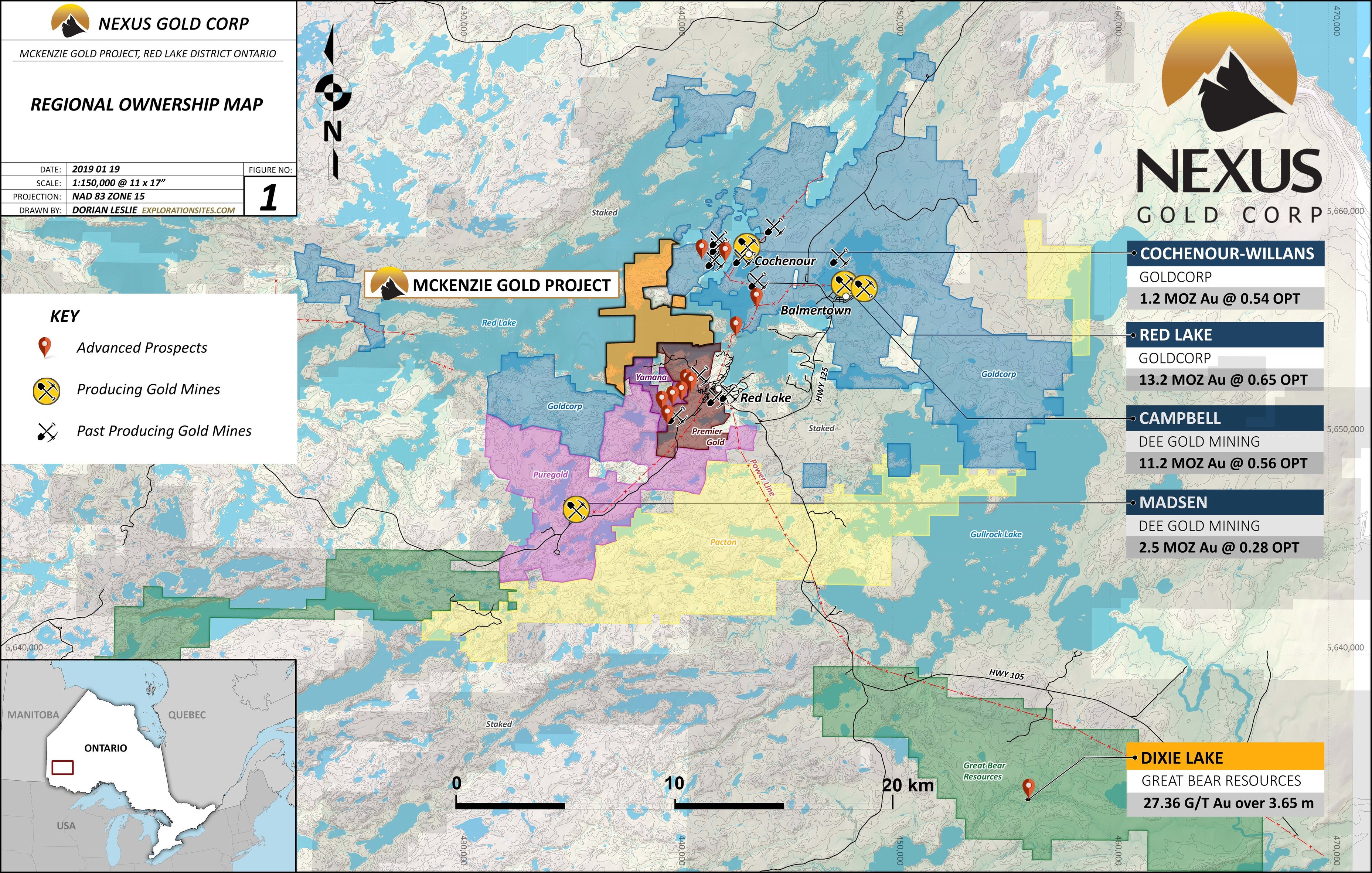 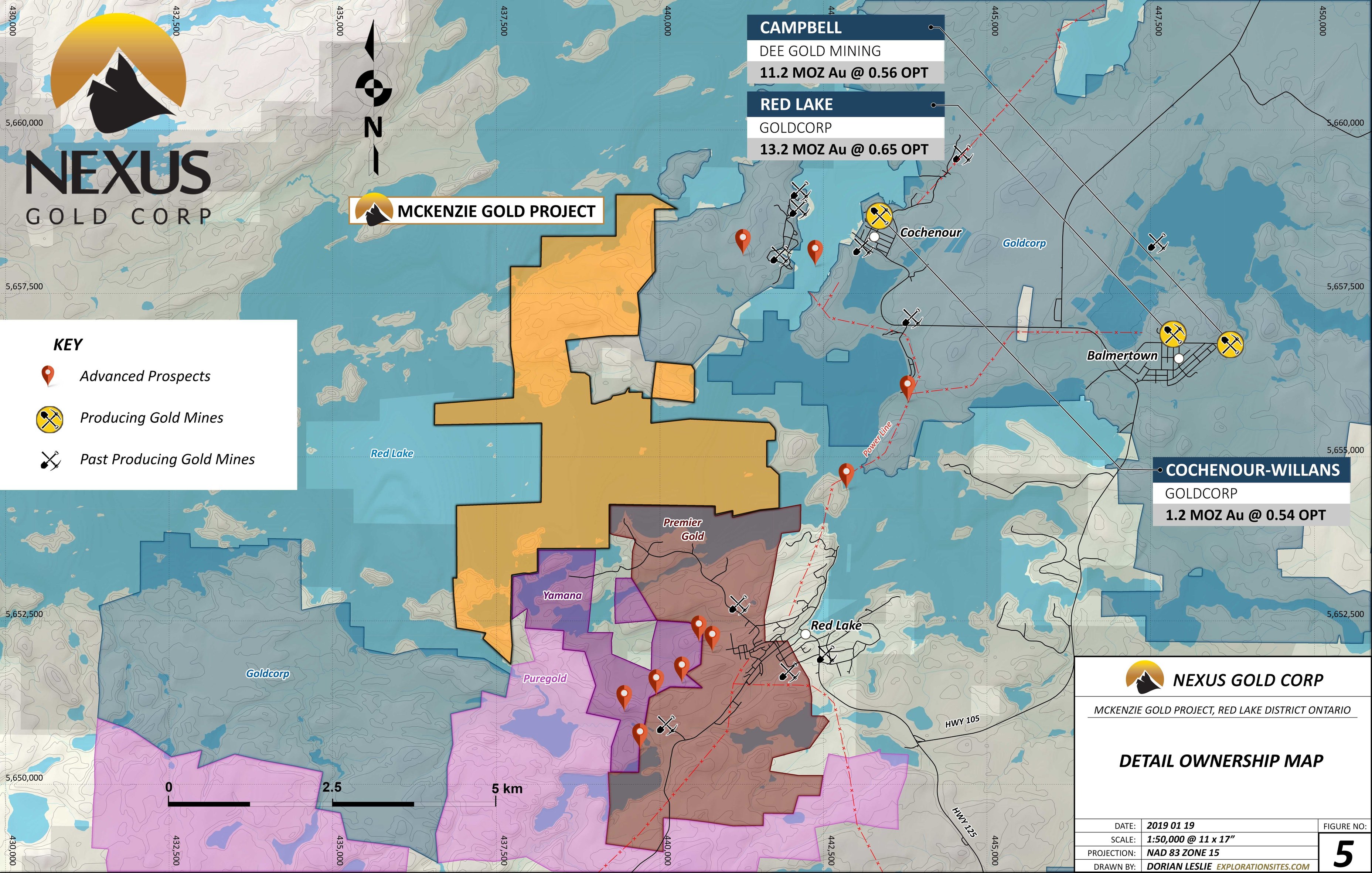 Nexus Gold is a Vancouver-based gold exploration and development company with active projects in West Africa and Canada. The Company is concentrating its efforts on establishing a compliant resource at one or more of it's four current West African-based projects which total over 560-sq kms (56,000+ hectares) of land located on active gold belts and proven mineralized trends, while also conducting development phases on its two 100%-owned Canadian projects, McKenzie Gold Project in Red Lake, Ontario, and the New Pilot Project, located in BC's historic Bridge River Mining Camp. For more information please visit www.nexusgoldcorp.com.

Warren Robb P.Geo., Vice-President, Exploration, is the designated Qualified Person as defined by National Instrument 43-101 and is responsible for the technical information contained in this release.

On behalf of the Board of Directors of

Neither TSX Venture Exchange nor its Regulation Services Provider (as that term is defined in the policies of the TSX Venture Exchange) accepts responsibility for the adequacy or accuracy of this release. This news release may contain forward-looking statements. These statements are based on current expectations and assumptions that are subject to risks and uncertainties. Actual results could differ materially because of factors discussed in the management discussion and analysis section of our interim and most recent annual financial statement or other reports and filings with the TSX Venture Exchange and applicable Canadian securities regulations. We do not assume any obligation to update any forward-looking statements, except as required by applicable laws.