NEW YORK, NY / ACCESSWIRE / April 24, 2019 / The Cannabis industry is going through a major acquisition-consolidation phase. Over the past couple of years we have seen the cannabis industry grow like wildfire. This growth has pushed hard on the state and federal regulators, causing easing of the laws at both levels, while simultaneously seeing security-surveillance regulations come about. While some have been slow to make changes, only allowing limited medical research or hemp farming (non-THC) exclusively, others have jumped head first, allowing everything including recreational marijuana use.

States like Colorado and California have licensed recreational dispensaries and 'smoke houses', generating huge tax revenue, other states are taking it 'slowly'. Part of the issue has been this 'confusion' or 'misunderstanding' the differences between hemp and marijuana. As a result, the US ended up with both plants being on the Schedule I of controlled substances. The differences have finally begun to break this incorrect stigma with regulators approving the 2018 Farm Bill, removing Hemp from the list, making it legal across the country. Just the expectations of the bill being put before congress was enough to spark the hemp industry, causing a massive spike across the country of growers requesting licenses or petitioning their states to allow farming of hemp.

Then we have countries like Canada that went to the other end of the spectrum, legalizing recreational marijuana use across the country. This of course caused a significant supply problem for both recreational and medical use of the plants. A recent article in Barron's (The Great Marijuana Shortage Shows No Signs of Letting Up) discusses this issue at length. Companies have been scrambling to increase supply via expansion as well as acquisition of existing farming and production facilities.

The acquisitions by some of the larger companies has been covered in numerous articles including Fox (Pot Stocks Are Soaring And The Cannabis Industry Is Poised For 'tons Of Growth')and others. There is ongoing consolidation as rapid growth companies take advantage of the influx of investment capital to acquire, instead of develop, additional revenue streams or 'jump to the head of the line' and avoid the extra R&D costs. With so many startups popping up all over the place, this trend is only going to continue. 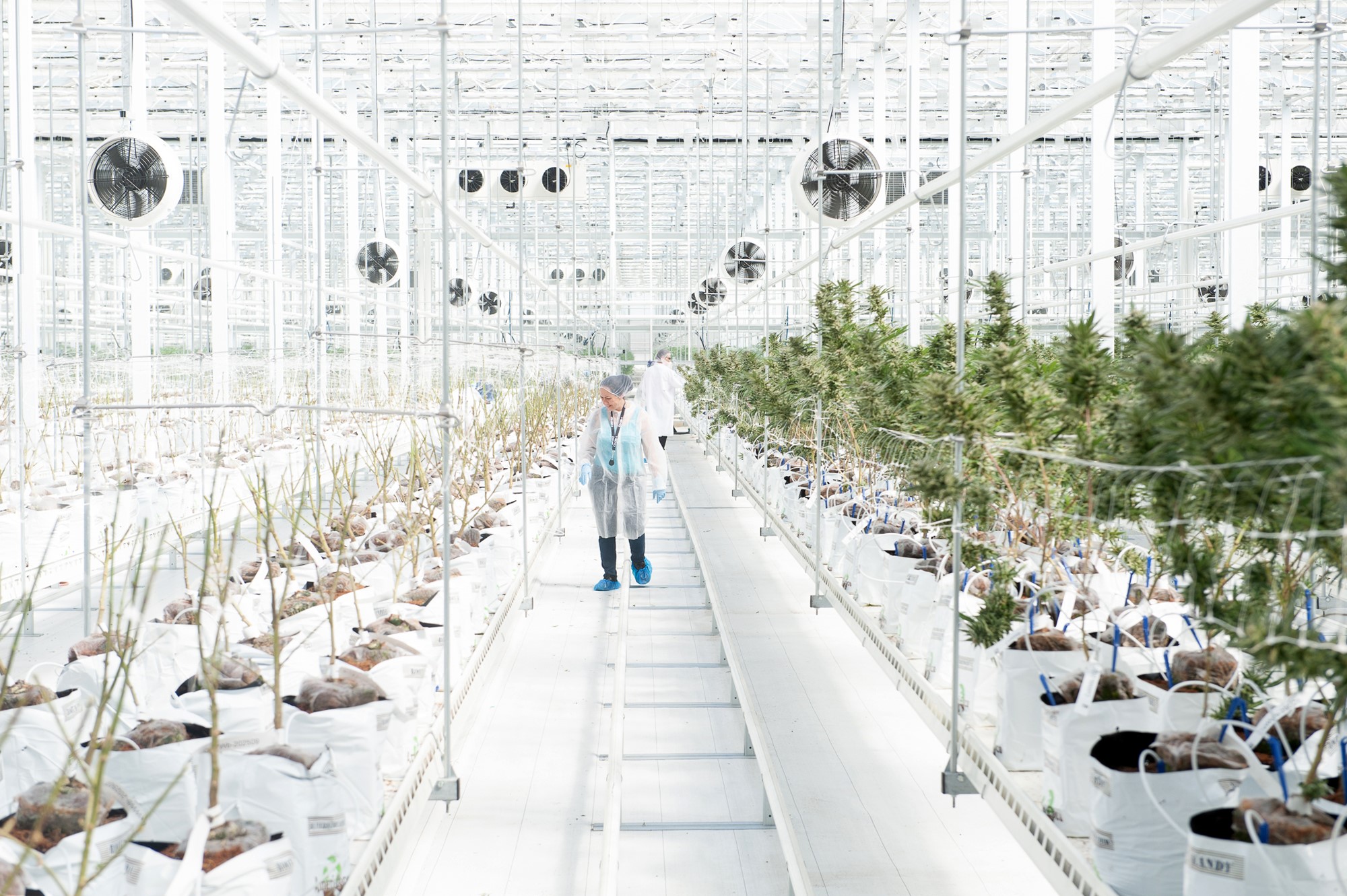 Since early January, plants have been moving into the greenhouse and the first plants have now been harvested. The Company continues to ramp up to full harvest capacity using the continuous harvest methodology, the latest step towards reaching the full annual production capacity of 108,000 kg of dried flower per year.

HEXO Corp's headcount now exceeds 600 employees. The Company expects to hire another 500 employees in the coming months; 300 additional position at its campus in Gatineau, Quebec, and 200 in its Belleville, Toronto and Montreal locations.

On March 13, 2019, HEXO announced a definitive arrangement agreement to acquire Newstrike Brands Ltd. The acquisition would allow the Company to boost its production capacity to 150,000 kg annually, diversify its domestic market penetration to 9 provinces and add infrastructure supporting the Company on its goal of becoming one of the top cannabis companies in the world.

The large number of consolidations/acquisitions in the industry has some companies fighting for better deals. In the case of Aphria Inc. (NYSE: APHA), as seen in their release shown below, they not only are looking to stop the take-over bid, they are positioning to secure an almost $90M capital infusion, as part of the agreement terminations, to be used for growth.

Aphria Inc. (NYSE: APHA) today announced that it has entered into a series of transactions that will accelerate the expiry date to April 25, 2019 for the previously announced take-over bid by Green Growth Brands Inc. (''GGB'') and will terminate the arrangements with GA Opportunities Corp. (''GAOC'') for consideration of $89.0 million.

Irwin D. Simon, Aphria's Chairman and Interim Chief Executive Officer stated, ''We are very pleased to move forward with this favorable resolution as we continue to focus on the long-term growth of our leading cannabis business. We plan to use the $89.0 million in proceeds from the transaction to fund our strategic global expansion initiatives. On behalf of our Board of Directors and management team, we continue to recommend that Aphria shareholders reject the GGB offer and do not tender their Aphria shares to the GGB offer.''

Aphria has entered into a shortened deposit period agreement with GGB to facilitate the acceleration of the expiry of GGB's offer to purchase all of the issued and outstanding shares of Aphria (the ''GGB Offer''). In that regard, Aphria has agreed to reduce the initial deposit period of the bid to 92 days from January 23, 2019, the date that GGB commenced the GGB Offer. GGB will be mailing a Notice of Variation providing that the GGB Offer will expire at 5:00 p.m. on April 25, 2019. Based on the closing price of $3.86 per GGB share on the Canadian Securities Exchange (''CSE'') on April 12, 2019, the implied consideration under the GGB Offer would be $6.07 per Aphria share, representing a significant 54.7% discount to Aphria's closing price on the Toronto Stock Exchange of $13.41 per share on the same day.

All this talk about acquisitions, consolidation and market growth brings up the big question about security and surveillance of these facilities. Both at the local and country level, regulators have enacted varying requirements for security and surveillance. In the USA, for example, states like Pennsylvania require 2 years of video footage archived. These disparate requirements have companies playing catch-up left and right. Needing to focus on growth/production of their product instead of the added layer of security-surveillance's ever changing requirements will lead to more companies outsourcing this need.

The Cannabis Conference 2019 brought this fact to light. The demand for compliance with local regulations continues to dominate the concerns of individuals and companies. One such company that attended the conference, DirectView Holdings, Inc., (OTC: DIRV), saw strong interest in their cannabis security-surveillance products as discussed by management in a recent press release:

DirectView Holdings, Inc., (OTC: DIRV) ("DirectView" or the "Company"), a company focused on ownership and management of leading video and security technology companies, announced today that the Company achieved record sales and gross profit during its 2018 fiscal year.

DirectView's record results reflect a continued increase in number of large new and existing customer projects whereby DirectView and its subsidiaries were awarded the related contracts.

46% growth in product gross profit to a record $1.7 million

Sales and gross profit trends continued to expand during 2018 and reflect strong product and services demand, while SG&A continues to reflect on-going committed investments in technology and additional customer-facing headcount.

Roger Ralston, DirectView's CEO stated: "DirectView's record 2018 performance is a reflection of our strategy to be the best in the industry across all facets of the customer experience, from system design, to installation, to post installation support. Our team's customer first focus has generated the highest sales and profits of any year in our history. Additionally, our focus on delivering a world class customer experience is fueled by the investments we continue making in our team as we continue to grow the company within the areas of people, process, and technology.''

With a focus on growth and expansion, without the need for a security-surveillance division, companies like Aphria Inc. (NYSE: APHA) and HEXO Corp (NYSE: HEXO) can use more of their resources for corporate growth. This is where companies like DirectView Holdings, Inc., (OTC PINK: DIRV) can step in, filling this growing need with their turnkey systems. Now companies can focus on growth and production, increasing revenues, without worrying about building up a whole new security-surveillance division.

More information on DirectView Holdings, Inc., (OTC PINK: DIRV) can be found on their website.

Stock Market Press is a financial news company that delivers up to date stock news, introduces private and public companies to a wide audience of investors, consumers, journalists and the general public via social media and a rapidly expanding network.