WASHINGTON, DC / ACCESSWIRE / April 17, 2019 / The MEMRI YouTube channel has passed the milestone of three million views since its launch in December 2017. The channel also now has 10,134 subscribers viewing MEMRI TV clips as they are released. To date, the MEMRI YouTube channel has posted 697 clips and had 3,186,613 views; it reached the one-million views mark in November 2018. 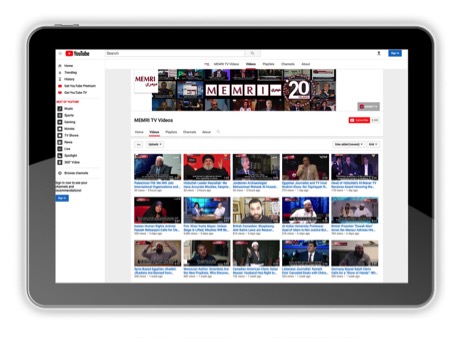 MEMRI research on and translations from the Arab and Muslim world provide crucial resources to educate policymakers, media organizations, the public, and others. MEMRI asks for your help to continue this important work by making a tax-deductible donation.

MEMRI also maintains a Tumblr page for the Women's Studies Initiative – a major component of the MEMRI Reform Project, which identifies and supports those in the Arab and Muslim world who advocate for reform and human rights and who speak out against violent extremism and anti-Semitism.

Other MEMRI projects include the Jihad and Terrorism Threat Monitor (JTTM), the Cyber & Jihad Lab (CJL), the Tom Lantos Archives on Antisemitism and Holocaust Denial, the Russian Media Studies Project, among others. You can follow these projects on social media as well.

Founded in February 1998 to inform the debate over U.S. policy in the Middle East, MEMRI is an independent, nonpartisan, nonprofit, 501(c)3 organization. MEMRI's main office is located in Washington, DC, with branch offices in various world capitals. MEMRI research is translated into English, French, Polish, Japanese, Spanish and Hebrew.

MEMRI In The Media: https://memriinthemedia.org