NEW YORK, NY / ACCESSWIRE / April 9, 2019 / Magazine Industry Trends for 2019 are ever changing and becoming more disruptive. Digital publishing continues to gain larger market share from traditional print publication formats. Whether digital, print or a combination of both, the key factor that remains #1 on the list is a powerful cover image.

No one knows that better than Michael Grecco, a commercial photographer that has done well over $110+ billion in magazine cover shoots and counting.

Grecco has done commercial photography and celebrity photography cover shoots for some of the most recognized magazine publications in the world, such as Forbes, Time, Sports Illustrated (SI) and many others. 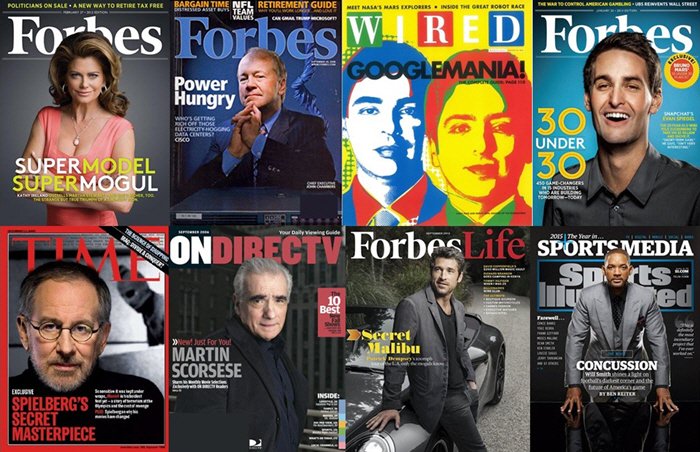 "A power cover stands the test of time. The imagery, the look and pose, all elicited from these titans of industry in corporate business and entertainment. Power covers are a must when publishers are trying to sell their print and digital magazine issues," Grecco said.

Many billionaire business founders, CEO's, executives and global celebrities have graced the covers Grecco shot. A total of $110.9 billion in combined net worth of these individuals, from only eight cover shoots, even though Grecco has done over 50+ magazine covers in his photography career to date.

"All of the covers I've done in my career have been amazing experiences. I've been honored and privileged to work with such great publications and individuals. One person I would definitely like to do a power cover with is Jeff Bezos of Amazon," said Grecco.

Jeff Bezos is the founder of Amazon.com, owner of The Washington Post and Blue Origin, an aerospace company that is developing a rocket for commercial use. Bezos is "the" wealthiest individual in the world today, with a current net worth of $152B.

Michael Grecco is an extensive award-winning Celebrity Photographer and Creative Director with a photography career spanning 41 years, with studios in both Los Angeles, CA and New York City, NY.

Grecco can be found traveling the globe over 200+ days each year on high-end commercial, advertising, editorial and entertainment photoshoots and cover shoots for many recognizable celebrities, iconic business greats and global brands. For more information on retaining Michael Grecco and his creative team, call +1-310-452-4461 or visit https://MichaelGrecco.com.

For News Media and Press Inquiries: