TORONTO, ON / ACCESSWIRE / April 8, 2019 / Rupert Resources Ltd ("Rupert" or "the Company") is pleased to provide an update on exploration activites at the Pahtavaara Project in the Central Lapland Greenstone Belt of Northern Finland. The Pahtavaara Project comprises a 290km2 contiguous land package and the permitted Pahtavaara mine with an inferred resource of 474kozs and a 1,400tpd mill and tailings facility.

James Withall, CEO of Rupert Resources commented "The drill results reported today build on the geological modelling and underground sampling work undertaken in 2018 and demonstrate the potential for additional resources to be defined at the Pahtavaara deposit. The zones discussed are all near to surface and close to existing infrastructure. The combination of improved understanding of controls on mineralisation at the mine and continuing exciting results from our regional exploration give confidence to our approach to unlock the potential of this prospective region."

Following Rupert's reappraisal of historical drill data resulting in a new geological model, a limited drilling program totalling 3,128m was undertaken in late 2018 and early 2019 to identify near-surface extensions of known mineralisation in the Pahtavaara mine. The 2018 structural work identified that the bulk of mineralisation (474koz of existing Inferred Resources plus 441koz of depleted resources mined by previous operators) at Pahtavaara was hosted in two plunging zones, Samurai and DB controlled by the intersection of north west and east-north- east structural features. This recent drilling demonstrates the potential for further mineralised plunging shoots in the NFE zone (see Figure 1) that come to surface and show continuity at depth along with further near surface mineralisation in close proximity to the North West ("NW") and Main open pits. Further to this, limited drilling at Karoliina West and in the T zone structure showed that mineralisation is open to towards the surface.

Rupert has completed a number of drilling programs in this area and defined a series of mineralised zones that occur as moderately steep plunging shoots orientated similarly to the previously mined areas at Pahtavaara.

The most recent drilling was designed to further delineate the near surface expression of one of these shoots between two previously mined shallow open pits (refer to Figures 1 and 2). Drillhole 119007 intersected 4.1m at 1.9g/t Au from 6.9m, this hole was collared 40m to the west of a number of shallow high grade intercepts from historic drill holes 110886 and 111865. The mineralisation potentially extends down dip 120m to previous Rupert drilling, holes 117102 and 117068, and a further 50m down dip to a series of holes drilled from underground including 117377 and 117379. 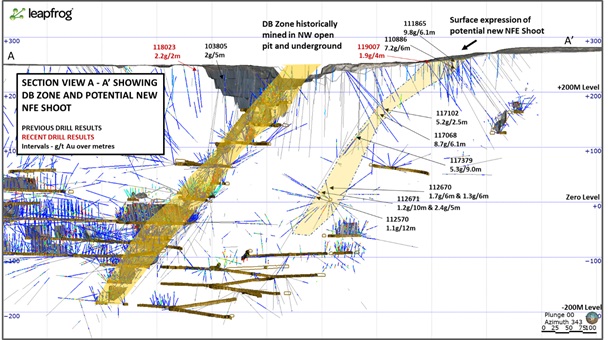 Historic underground drilling from zero level (250m below surface) in 2012 identified a broad zone of mineralisation that could represent the down dip extension of this newly defined plunging shoot. The widths of anomalous gold assays in this zone are up to 30m and potentially a number of sub-parallel structurally controlled zones coalesce at this depth. No mining was previously undertaken in this area.

Two other potential mineralised shoots have been identified by Rupert in the NFE zone. The surface expression of these shoots, located approximately 100m to the northwest of recent drilling was partially mined by a shallow open pit. These shoots have similar plunge orientations to the new zone, are narrower width and very high grade. Highlights include 18.7g/t Au over 1m from 85m in an upper zone from hole 116047 and 432g/t Au over 1m and 245g/t over 1m in a lower zone at 140m depth in holes 116011 and 116051.

A series of holes were drilled to test the potential extension of mineralisation to the west of the NW open pit following promising results from underground sampling in the Whaleback zone at depth. Holes 118022, 023, 024, 026 and 119005 and 006 all intersected zones of mineralisation, varying in grades from 0.5g/t Au to 4g/t Au over widths of 0.9m to 2.3m, which confirmed the expected structural zone. Hole 118023 intersected the target zone at 17m with 2.2g/t over 2m (see figure 2) however, due to the weathered nature of the structure near surface there was significant core loss. Re-submission of a quarter core sample returned 9.0g/t Au over 1m from the same zone. Further drilling to both the west and north of this pit will be incorporated into future at mine programmes.

Drilling to the west of the Main pit identified the extension of the east-north-east structural feature intersecting 2.6g/t over 1.4m from 30m in hole 118031. The intersection is located 60m from the western limit of the pit and 50m above a previously mined underground stope.

Figure 2. Location of main mineralised zones at Pahtavaara mine 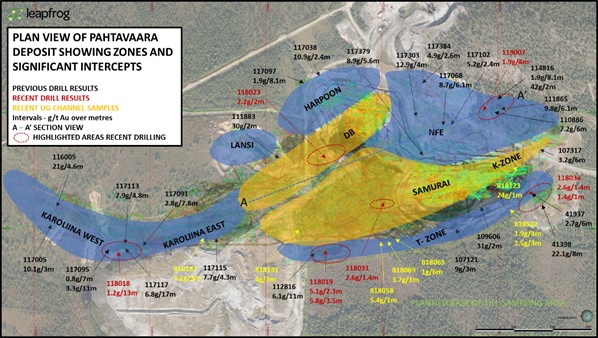 The T-zone structure that runs to the south of the deposit has been mined selectively from underground and new areas of interest were identified in the 2018 underground sampling programme. However, limited drilling has been conducted near surface to date. Two holes were drilled 50m to the south east of the main pit with hole 118034 intersecting a 15.3m wide anomalous gold zone from 24.7m depth including 2.6g/t Au over 1.4m. Historic shallow RC results in this area include, 2.7g/t Au over 6m from 35m and 10m @ 0.9g/t Au from 30m in holes 41937 and 50181. Hole 118033 drilled 100m to the east did not intersect the target structure and potentially defines an eastern limit to the deposit.

The potential for the Pahtavaara deposit to extend to the south east remains untested with only very limited RC drilling and surface soil sampling that shows anomalous gold results. Prior to further drilling in this area a base of till programme is planned to identify the extent of these anomalies and define future targets.

Other near surface potential

The most recent drill program was restricted to the immediate vicinity of the open pits at the Pahtavaara, however four holes were drilled earlier in 2018 targeting near surface mineralisation above underground infrastructure to the west. At Karoliina West hole 118018 intersected 1.2g/t Au over 13m from 59m and a further 2.1g/t Au over 4.6m from 81.5m which extends a zone 20m westwards from hole 117117. At the west extent of the T-zone three holes were drilled above a historic stoping area with hole 118019 intersecting two mineralised structures, the first at 66.8m, 5.1g/tAu over 2.3m and the second at 83.5m, 5.8g/t Au over 3m. The remaining holes intersected zones of anomalous gold but below cut-off.

In compliance with National Instrument 43-101, Mr. Mike Sutton, P.Geo. is the Qualified Person who supervised and approved the preparation of the scientific and technical disclosure in this news release.

Samples are prepared by ALS Finland in Sodankylä and assayed in ALS laboratory in Ireland. All samples are under watch from the drill site to the storage facility. Samples are assayed using fire assay method with aqua regia digest and analysis by AAS for gold. Over limit analysis for >10 ppm Au is conducted using fire assay and gravimetric finish. For multi-element assays Ultra Trace Level Method by HF-HNO3-HClO4 acid digestion, HCl leach and a combination of ICP-MS and ICP-AES is used. The Company's QA/QC program includes the regular insertion of blanks and standards into the sample shipments, as well as instructions for duplication. Standards, blanks and duplicates are inserted at appropriate intervals. Approximately five percent (5%) of the pulps and rejects are sent for check assaying at a second lab.

Base of till samples are prepared in ALS Sodankylä by dry-sieving method prep-41, and assayed by fire assay with ICP-AES finish for gold. Multi-elements are assayed in ALS laboratories in either of Ireland, Romania or Sweden by aqua regia with ICP-MS finish. Rupert maintains a strict chain of custody procedure to manage the handling of all samples. The Company's QA/QC program includes the regular insertion of blanks and standards into the sample shipments, as well as instructions for duplication.

Rupert is a Canadian based gold exploration and development company that is listed on the TSX Venture Exchange under the symbol "RUP". The Company owns the Pahtavaara gold mine, mill, and exploration permits and concessions located in the Central Lapland Greenstone Belt in Northern Finland ("Pahtavaara"). Pahtavaara has an Inferred mineral resource at a 1.5 g/t Au cut-off grade of 4.6 Mt at a grade of 3.2 g/t Au (474 koz) (see the technical report entitled "NI 43-101 Technical Report: Pahtavaara Project, Finland" with an effective date of April 16, 2018, prepared by Brian Wolfe, Principal Consultant, International Resource Solutions Pty Ltd., an independent qualified person under National Instrument 43-101 – Standards of Disclosure for Mineral Projects). The Company also holds a 100% interest in two properties in Central Finland - Hirsikangas and Osikonmaki; the Gold Centre property, which consists of mineral claims located in the Balmer Township, Red Lake, Ontario; and the Surf Inlet Property in British Columbia.

Table 1. Near mine drilling intercepts at Pahtavaara

A lower cut of 0.5g/tonne Au has been used for all intervals. No upper cut-off grade was applied. Maximum two metre interval of less than cut-off used for reporting. Unless specified, true widths cannot be accurately determined from the information available.