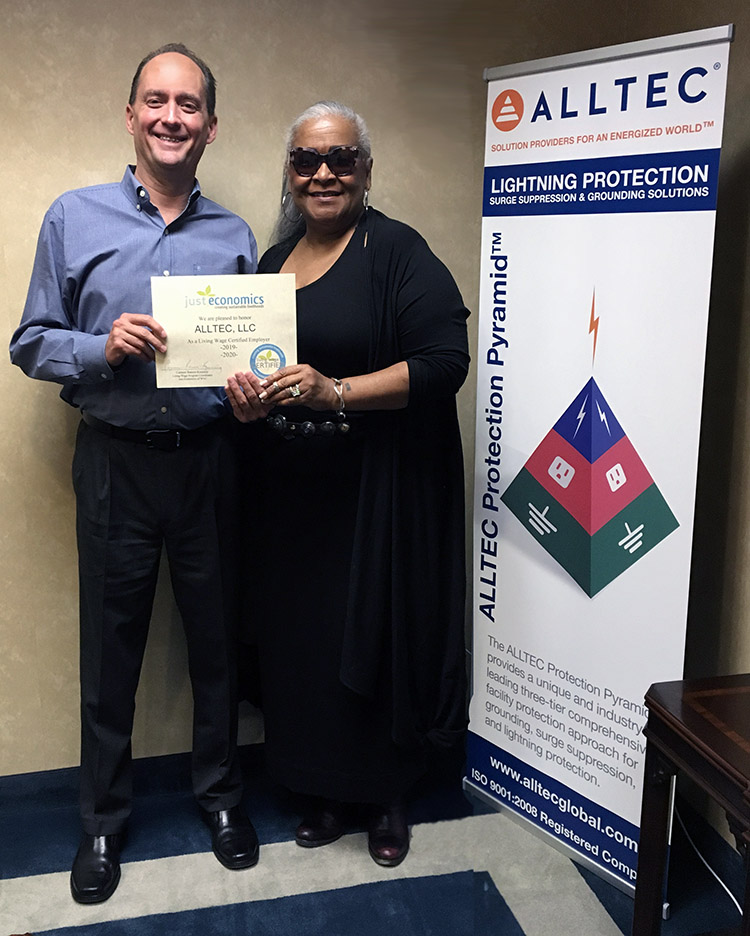 Pictured Above: Christopher Bean of Alltec with Carmen Ramos-Kennedy of Just Economics

You may be wondering, what is Living Wage Certified?

Living Wage is defined as an income that is high enough to maintain a normal or basic standard of living. State minimum wages are not enough for individuals to live off of as the cost of living far outweighs the pay rate. The basic needs taken into account for a Living Wage include housing, food, and other essential items such as clothing.

Living wage is not a new concept, some even trace it back to the ancient Greek philosophers like Plato and Aristotle - both of whom supported fair income based on needs for the communal good.

Later, in the 1200s Thomas Aquinas argued for a 'fair and just wage'.

In 1675 ship carpenters in Boston banded together for the first time demanding higher (fair) wages - one of the earliest examples of a union, which has long played a role in living wages.

Just Economics is a regional non-profit organization based in Asheville, NC with a mission to educate and advocate for a sustainable economy for Western North Carolina (WNC). The Living Wage Certification Program was developed initially in 2000 from the Asheville-Buncombe Living Wage Campaign, JE really took root in 2006 when they passed the first living wage ordinance guaranteeing Asheville City employees a living wage.

What it means to be living wage certified:

Being a living wage certified company means that Alltec is one of many companies that will pay a minimum wage calculated to keep workers and their families above the minimum standard of living rather than just above the poverty threshold.

The living wage for 2019 is $13.65/hour or $12.15/hour with employer provided health insurance. Living wage is the minimum amount that a worker must earn to afford his or her basic necessities, without public or private assistance. In short, a living wage is the real, just, minimum wage. In North Carolina the State minimum wage is $7.25/hr. The federal minimum wage has failed to adjust over the years to accommodate the rising cost of living, thereby all but ensuring minimum wage workers stay in poverty.

There are 3 ways to calculate a living wage: as a percentage of the Federal Poverty line - which does not take into account regional differences in costs of living, as you can imagine this varies greatly. Another method is through a basic needs assessment - using the cost of basic needs in a geographic area for different family sizes to estimate wage, or by using the Universal Living Wage formula. The results of this method vary greatly. Lastly there is the Universal Wage formula, which is what Just Economics uses to adjust the living wage annually. This method is based on local cost of housing according to Fair market Rent as determined by HUD.