NJMC CEO and President, John Swallow stated, "We made major strides in 2018 - considerably de-risking the balance sheet, advancing the long-term potential of the Golden Chest Mine and greatly expanding our holdings within the Murray Gold Belt. Simultaneously building the Company, advancing operations and adding mine life all came together in 2018."

Operational Highlights include the following:

Mr. Swallow continued, "As we refine our operational expertise and long-term focus as a team, we recently compiled an internal "road map" for individual and corporate goal setting. This visual representation demonstrated the potential of the Golden Chest property, including the identified shoots and vertical continuity in relation to historic and current workings. With assistance from Andrew Brackebusch, Golden Chest Mine Engineer, the big picture visualization demonstrated the existing 3-5 years of mine life and the goal of "always" having 3-5 years of production ahead of us, even as production grows. We plan to include a supporting geologic/mine overview as part of our website update over the next few months."

Corporate Highlights include the following:

Mr. Swallow concluded, "When we decided to advance the Golden Chest into production, it was through an aggressive two-year payback plan - and that milestone was accomplished in 2018. Looking ahead, in addition to other corporate goals, our focus is on ramped-up production and the continued increase in mine life at the Golden Chest. And while the Company is focused on the future, we also took a brief inventory of the past (illustrated in the graph below). I believe the trends and growth in the asset base are impressive, especially considering the backdrop of gold prices, however the fact we have assets that are developed and/or generate revenue demonstrates considerable potential beyond what is reflected, in my opinion. Unlocking the value of our people and our asset base is something we focus on daily." 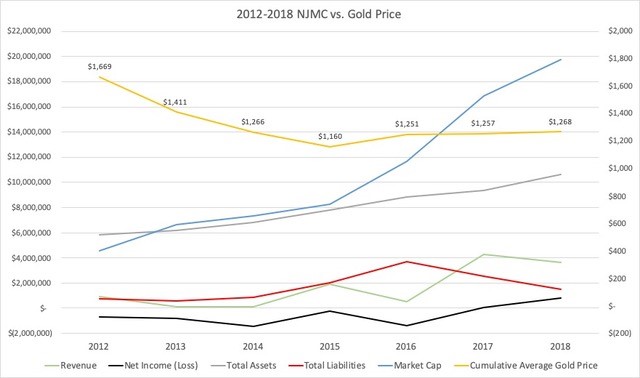 New Jersey Mining Company is headquartered in North Idaho, where it is producing gold at its Golden Chest Mine. Gold was first discovered in the Coeur d'Alene District within the Murray Gold Belt in 1879, but by 1888 mining declined as the center of activity and demand for labor shifted to the Silver Valley following the discovery of the Bunker Hill, Sunshine, Lucky Friday, and other iconic regional mines. The rebirth of the long-forgotten Murray Gold Belt has been led by NJMC, as evidenced by production from open-pit and underground operations at the Golden Chest Mine, its extensive land package and superior knowledge of the district gained from current development and production, and ongoing exploration activities.

NJMC has established a high-quality, early to advanced-stage asset base in three historic mining districts of Idaho and Montana, which includes the currently producing Golden Chest Mine. The Company's objective is to use its considerable in-house skill sets to build a portfolio of mining and milling operations, with a longer-term vision of becoming a mid-tier producer. Management is shareholder focused and owns more than 15-percent of NJMC stock.

The Company's common stock trades on the OTC-QB Market under the symbol "NJMC."

This release contains "forward-looking statements" within the meaning of Section 27A of the Securities Act of 1933, as amended, and Section 21E of the Securities Exchange Act of 1934, as amended that are intended to be covered by the safe harbor created by such sections. Such statements are based on good faith assumptions that New Jersey Mining Company believes are reasonable but which are subject to a wide range of uncertainties and business risks that could cause actual results to differ materially from future results expressed, projected or implied by such forward-looking statements. Such factors include, among others, the Company's plans to expand future exploration and resource development at the Golden Chest Mine and in the Murray Gold Belt, the risk that the mine plan changes due to rising costs or other operational details that may impact the Company's ability to extend the Golden Chest Mine life, the risks and hazards inherent in the mining business (including risks inherent in developing mining projects, environmental hazards, industrial accidents, weather or geologically related conditions), changes in the market prices of gold and silver and the potential impact on revenues from changes in the market price of gold and cash costs, a sustained lower price environment, as well as other uncertainties and risk factors. Actual results, developments and timetables could vary significantly from the estimates presented. Readers are cautioned not to put undue reliance on forward-looking statements. NJMC disclaims any intent or obligation to update publicly such forward-looking statements, whether as a result of new information, future events or otherwise