VANCOUVER, BC / ACCESSWIRE / March 25, 2019 / Unity Metals Corp. (the "Company") (TSXV: UTY) is pleased to announce that, after completing a detailed compilation of historic data, the Company has identified three target zones at the Margurete claims: the FB Zone, The Eastern Zone and the Western Zone. 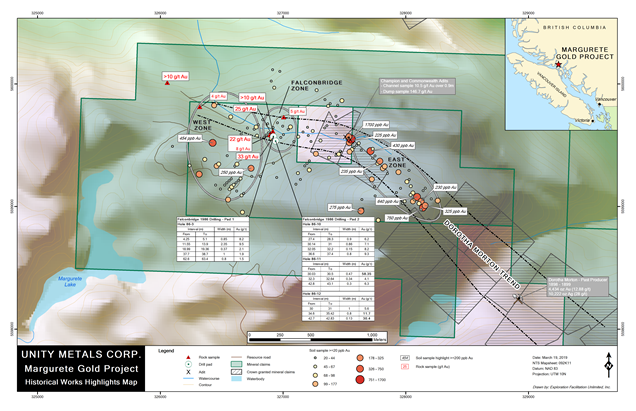 The FB Zone is highlighted by a successful drilling program in 1986 by Falconbridge. In particular, hole 86-3 had an average grade of 0.738g/t Au over 63.11m, beginning at 4.25m. A summary of the higher gold bearing intervals is summarized in the table below. The hole included multiple separate intervals which graded greater than 1g/t Au, indicating a broad mineralizing system. Holes 86-10, 86-11, and 86-12 were all drilled north from a pad 25m south of 86-3. Multiple auriferous intervals were encountered in each hole as summarized below:

(Assays and logs from Hardy, 1987—BC Assessment Report 15763 and a Charlemagne Resources Ltd. Internal report)

The Eastern Zone is distinguished by a historic gold-in-soil anomaly trend, identified in surveys performed by Falconbridge, in 1985 and 1986. The trend begins at the historic Doratha Morton Mine east of the claims and follows the Premier Fault to the western end of the claims for a total strike length of over 3km. Within this trend, the highest soil sample assayed at 1700ppb Au. This gold-in soil trend follows an identified VLF-EM conductor for its length. This conductor was the target of the 1986 Falconbridge drilling. There has been very minor documented work completed in this area despite excellent rock exposure and this represents a high priority zone.

In the Western Zone, Archer Cathro (1983) identified several gold and silver bearing rock samples. Sample M23014R ran greater than 10g/t Au and 68g/t Ag and sample M20545R graded 4g/t Au and 10g/t Ag. These samples were taken proximal to the contact between intrusives and the Margurete breccia. This is of interest because historic gold deposits in the Phillips Arm Gold Camp were generally proximal to contacts with the intrusive. The western side of the claims is underexplored and historic data (soils, rocks, and VLF) indicates there is excellent potential.

The Company is in the process of prioritizing these targets for the upcoming 2019 diamond drill program.

The technical content of this news release has been reviewed and approved by Peter Born, P.Geo., a qualified person for the purposes of National Instrument 43-101.

Unity Metals Corp. is a Vancouver-based gold exploration company. The Company controls a 100% interest in the Margurete Gold Project, which covers 678ha of mineral claims, located in the Phillips Arm gold camp, approximately 200 kilometers northwest of Vancouver in southwest British Columbia, Vancouver Mining Division. The project is on trend with the historic Doratha Morton and Alexandria gold mines, which were active in the late 1800’s. The Margurete project was last explored in 2015 with property-wide prospecting, mapping and rock chip sampling run in parallel with a targeted diamond drilling program. The primary target at the Margurete Gold Project is the FB Zone, where Falconbridge drilled multiple gold bearing intervals at shallow depths. For more information, please visit www.unitymetalscorp.com.

On behalf of the Company,

Neither the TSX Venture Exchange nor its Regulation Services Provider (as that term is defined in the policies of the TSX Venture Exchange) accepts responsibility for the adequacy or accuracy of this release. This news release may contain forward-looking statements. These statements are based on current expectations and assumptions that are subject to risks and uncertainties. Actual results could differ materially because of factors discussed in the management discussion and analysis section of our interim and most recent annual financial statement or other reports and filings with the TSX Venture Exchange and applicable Canadian securities regulations. We do not assume any obligation to update any forward-looking statements, except as required by applicable laws.