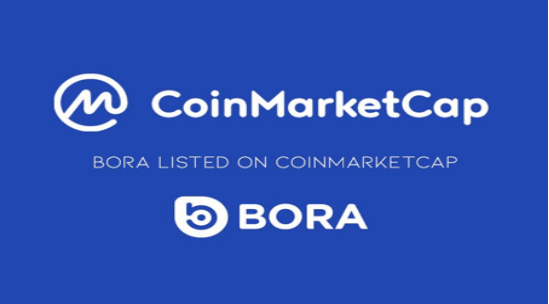 As of the 19th of March, anyone interested in BORA can now quickly and easily access information on the project and its token through CoinMarketCap. This increased exposure should help spread awareness of the project and increase developer activity within the BORA community.

BORA has established strong partnerships with leading companies from the mainstream gaming and blockchain industries. Some of their strategic partners include Kakao Games, Coinplug, Metadium, Block72, etc. Way2Bit, the developer of BORA is also favored by well-known investors such as Dunamu & Partners, BlockWater, Twosun Campus, and Awesome Ventures. In addition, BORA has established alliance partners with many project companies including ENP Games, Neon Games, 4:33, Unit5, Wisepeer, Greenwood Networks, RS Edu, Supertree and many others. The official service of BORA is scheduled to launch within the 2nd quarter of 2019.

Recent developments for the project include the BORA token getting listed on Coinsuper on January 15, and another listing earlier this month with DigiFinex also listing the token on its exchange.

CoinMarketCap is a representative service that provides information on cryptocurrencies around the world, including a variety of real-time information on specific tokens: market capitalization, trading volume, and the exchanges where each token trades. With price charts prominently displayed, CoinMarketCap is often the first stop for investors and users looking for information on their favorite tokens, making the site an important location for tokens to be listed.

CoinMarketCap, which began in 2013 with information on just seven cryptocurrencies, now lists more than 2,100 tokens. In addition to the quantity of data, it makes available; the site also emphasizes the quality of information. This is particularly difficult (and therefore valuable) in an industry like crypto where the pace of innovation is rapid, and new tokens come just as quickly as they go. CoinMarketCap lists only tokens which are listed on at least two major global exchanges and are known to provide reliable information regularly.

Being listed in the CoinMarketCap is a meaningful indicator for both developers and investors, as it can positively predict the volume and growth potential of the project.

Following its roadmap, BORA has recently made its Beta version available and is now undergoing final review ahead of the official release in the second quarter of 2019.

For more information about BORA: