BEIJING, CHINA / ACCESSWIRE / March 19, 2019 / On March 18, 2019, Er Dong Pictures held a large-scale press conference at the 23rd Hong Kong International Film & TV Market. The theme was "Aspiration for Sailing", referring to Er Dong Pictures aim to be based in domestic business in the future while expanding its global market. 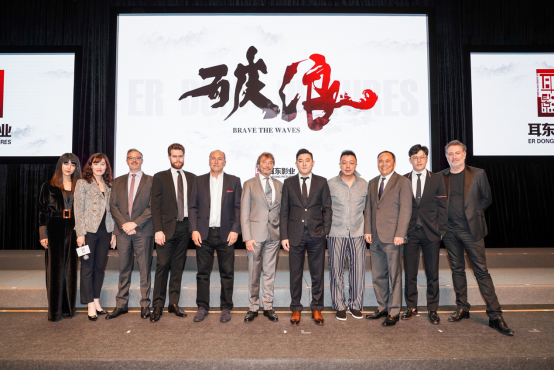 In the past four years, Er Dong Pictures Group has gradually established its own business systems in film and TV investment, film and TV production, cinema management, VR film and technology, and artist brokerage, forming a complete industry value chain. It also, however, keeps an open attitude to linking with the industry's top resources and seeking common development goals. At the press conference, Er Dong Pictures Group, the Emperor Group, Entertainment Plus (Hong Kong) Limited, I DO Cultural Corporation, and Pegasus Motion Pictures all released a joint deep strategic cooperation plan to expand their cooperation in all aspects of the entertainment industry.

In 2018, Er Dong Pictures had several hit film projects, and in 2019, the company is prepared to release a series of great movies. In the "Ride the Winds" session, Stanley Tang, Vice President of Er Dong Pictures Group, announced a list of key projects for the coming year, including P Storm, the latest installment in a series that has thus far made 745 million yuan at the box office, and the suspense movie Powerful Four, currently in production. Cast members from these films also attended the press conference to show their support.

Er Dong Pictures also released details of other upcoming film projects, including Song of Youth, Once Upon Time in Northeast China, Line Walker: The Prelude, Sons of the Neon Night, IP Man 4, and other projects like Fatal Visit, Invitation From USA, Cold Detective, Crime Scene, and Dynasty Warriors, films which cover a wide variety of genres such as comedy, suspense, and action.

The highlight of the conference was Er Dong Pictures announcing its entry into overseas markets. Er Dong Pictures has been preparing to develop its overseas business for a long time, and it aims to flexibly and multi-dimensionally stimulate the global film market in the future.

Gersh, well-known Hollywood talent Agency with a huge roster of action actors and over 3000 clients to enter mainland China and Asia. At the conference. William Gersh, the representative of the Gershs, and Brett Norensberg, the partner of the Gersh Agency, launched an in-depth cooperation programme with Yuki Zhang, the general manager of Er Dong Pictures. The two firms will form a joint venture company to introduce North American artists and management experience into the domestic market, while Er Dong Pictures will integrate domestic resources to lead the business development of Gersh artists in Asia.

The film list released included 12 projects, most of which are still still in development stage: these include Sentinel with James Wan, Smooth Stones and Empty Bones and Autoerotic for Sam Raimi, Melody for Jon M. Chu, and Special Forces for Sylvester Stallone. Er Dong Pictures trusts that its cooperation with Starlight Culture Entertainment Group will forge more high-quality film projects for the global film market.

At present, the film market in China is the world’s second largest by box office and Chinese film companies are constantly exploring overseas cooperation. The overseas cooperation plans of Er Dong Pictures have two main aims: the first is to "export", promoting Chinese film to the world to open up overseas resources channels for Chinese filmmakers and to encourage more participation in the core areas of the global film market; the second is to "import", not only learning from advanced overseas production experience and operational mechanisms but also introducing high-quality content and teams, fusing creative ideas, and creating a new format of pan-entertainment to further enrich the Chinese film market.

Although Er Dong has just been founded for less than four years, it has consistently shown love and awe to the film industry, and it will now concentrate on exporting excellent films to enhance the competitiveness of Chinese films in the global market. It sees its responsibility as being to ensure the production of the "head" (a term from "Long-tailed distribution" in statistics and business) as standard, seeking out the "head" project, establishing the "head" teams, and introducing the best resources. With the initiation of its overseas plans, Er Dong Pictures will also move closer to its goal of becoming the top entertainment producer in China.