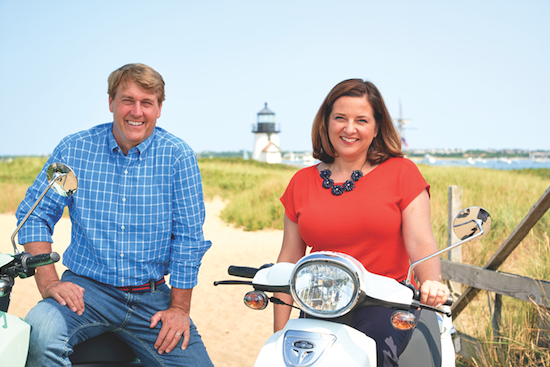 Since its premiere in 2017, Weekends with Yankee has traveled throughout New England, transporting viewers nationwide on an insider's journey to the region's very best - from captivating scenery, bountiful nature and wildlife, and breathtaking vistas to signature attractions and the treasured secret spots known only to locals. In Season 3, thirteen half-hour episodes continue the series' exploration of hidden gems, magnificent landscapes, and delicious destinations - including flourishing and innovative urban areas, thriving artists' enclaves, coastal towns of tranquil beauty, rural farmlands, and rugged mountains with spectacular trails. This season also features interviews with local artisans and singular personalities who call New England home - and whose work is influenced by this unique region, with its striking seascapes, majestic mountains, and charming small towns.

Emmy Award-winning explorer Richard Wiese and Yankee senior food editor Amy Traverso will return as series hosts and tour guides. Richard will take viewers on exciting adventures throughout the region. Amy will highlight New England's storied cuisine and visit celebrated regional chefs and culinary gems in this special food hub, and cook classic and modern interpretations of local fare - from homemade cheese to heirloom squash to delicious seafood dishes. All recipes will be published on weekendswithyankee.com.

In the season premiere, Richard brings viewers along on Maine's thundering Kennebec River so viewers can experience the thrill of New England's top whitewater rafting destination. In Bremen, Maine, the series heads out with the rising sun with National Audubon researcher Stephen Kress, who has worked tirelessly to restore native puffins. And Amy joins Connecticut chef and foraging expert Bun Lai to learn how to find delicious food in unexpected places.

Season 3 viewers will also accompany Weekends with Yankee on these journeys and more:

''For Season 3, we've gone farther afield to bring even more voices and experiences to audiences,'' says WGBH Executive Producer Laurie Donnelly. ''There's something here for everyone, from forests to the coasts to the authentic hallmarks of this wonderfully appealing region.''

''For this upcoming third season of Weekends with Yankee, our editors and the team at WGBH have assembled a stellar collection of favorite destinations, foods, and events to explore. We can't wait to share them with our viewers,'' says Brook Holmberg, publisher of Yankee.

Series funding for Weekends with Yankee is provided by State of New Hampshire Division of Travel & Tourism, Emerald Waterways, Maine Office of Tourism, and The Vermont Country Store.

Based in Dublin, New Hampshire, Yankee: New England's Magazine was founded in 1935 and is the iconic American magazine covering the finest that New England has to offer. Covering classic New England travel destinations, food traditions, and home and lifestyle stories with stunning photography and artwork, Yankee has featured many notable American writers in its pages such as Robert Frost, John Updike, and Stephen King. With a total circulation of nearly 300,000 and a total audience of 1.8 million readers, the magazine is published by Yankee Publishing Inc. (YPI), a family-owned, independent company. Yankee has also partnered with WGBH to produce Weekends with Yankee, a 13-episode documentary series on public television that taps into Yankee's extensive behind-the-scenes access to the region's six states. YPI also owns the nation's oldest continuously produced periodical, The Old Farmer's Almanac, and McLean Communications. More information about Yankee is available at: https://newengland.com/press-contact/

WGBH Boston is America's preeminent public broadcaster and the largest producer of PBS content for TV and the Web, including Masterpiece, Antiques Roadshow, Frontline, Nova, American Experience, Arthur, and more than a dozen other primetime, lifestyle, and children's series. WGBH's television channels include WGBH 2, WGBX 44, and the digital channels World and Create. WGBH TV productions focusing on the region's diverse community include Greater Boston, Basic Black, and High School Quiz Show. WGBH Radio serves listeners across New England with 89.7 WGBH, Boston's Local NPR®; 99.5 WCRB Classical Radio Boston; and WCAI, the Cape and Islands NPR® Station. WGBH also is a major source of digital content and programs for public radio through PRI/PRX, including The World and Innovation Hub, a leader in educational multimedia with PBS LearningMedia™, providing the nation's educators with free, curriculum-based digital content, and a pioneer in services that make media accessible to deaf, hard-of-hearing, blind, and visually impaired audiences. WGBH has been recognized with hundreds of honors: Emmys, Peabodys, duPont-Columbia Awards, and Oscars. Find more information at wgbh.org.

Richard Wiese is the host of Weekends with Yankee on public television. As a world-class explorer, Richard brings a seasoned traveler's curiosity and appetite for discovery to his role as the series host and expert guide through New England. In addition to Weekends with Yankee, he is the host of the Emmy Award-winning television series Born to Explore with Richard Wiese. He is the author of the guidebook Born to Explore: How to Be a Backyard Adventurer, and in 2002 he became the youngest-ever president of the Explorers Club. Richard has traveled to all seven continents and has participated in numerous expeditions and projects, including two expeditions to Antarctica, a cross-country skiing trek to the North Pole, and the largest medical expedition ever conducted on Mount Everest. He lives in Weston, Connecticut, and is a graduate of Brown University.

Amy Traverso is the senior food editor at Yankee magazine. Previously, she was food editor at Boston magazine and an associate food editor at Sunset magazine. Her work has also been published in The Boston Globe, Salon.com, and Travel & Leisure, and she has appeared on The Martha Stewart Show, Throwdown with Bobby Flay, and Gordon Ramsay's Kitchen Nightmares. She is the author of The Apple Lover's Cookbook, which was a finalist for the Julia Child Award for best first-time author and won an IACP Cookbook Award in the ''American'' category.