VANCOUVER, BC / ACCESSWIRE / March 12, 2019 / International Montoro Resources Inc. (TSX-V: IMT) (the "Company"). Gary Musil President reports; "With the receipt of September 2018 https://www.slideshare.net/secret/eqThN4pFkSMGou we learned that the ZTEM appears to identify a deep, gently east dipping & north plunging conductive layer at a depth of ~750m that coincides with the magnetic anomaly. The feature layer that is centered on our Pecors area block, also remains open to the north."

Included in Montoro's 2D Geotech ZTEM inversion report are ZTEM results over the deeply buried (>800m) Eastern Deeps deposit, from Vale's Voisey Bay Ni, Cu, Co mine. Voisey Bay, being the biggest mining discovery in Canada in the last 50 years, any comparative geophysical data bodes well for our Pecor's Ni, Cu, PGE project. In September 2018 (as reported in the Sudbury Mining Solutions Journal), Vale gave the go ahead for $2 billion in mine developments at its Voisey's Bay operation in Labrador.

The Geotech 2D report recommended a 3D inversion report be completed. Remarkably now that we can view the depth with width and length in 3D we can now see that the original 3 anomalies identified by the ZTEM 2D are in fact the tips of an iceberg of one considerably large contiguous magnetic anomaly estimated to be 5km long 2km wide and 2km deep."

Drill holes completed by Rio Algom (blue) and Montoro (red) as seen on the https://www.slideshare.net/secret/2vLqjOnrClKL9h 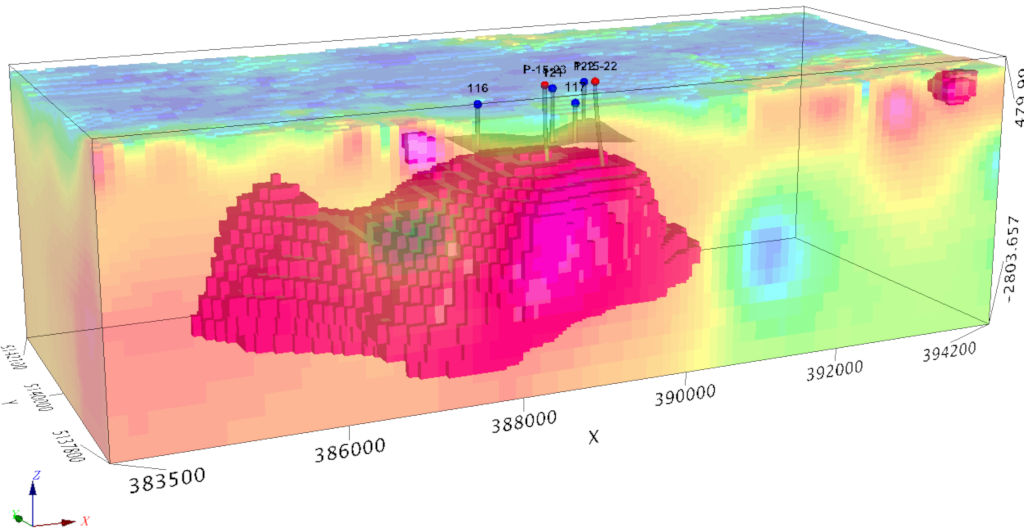 The Pecors ZTEM survey shows similarities with ZTEM results over the Vale Canada Limited ("Vale") Voisey Bay, Eastern Deeps-deposit. ZTEM was successfully able to position the Eastern Deeps deposits in the correct location and at the correct depth (~750m) using 2D inversion (Jansen and Cristall: in Proceedings of Exploration 2017).

Further to our news release of September 19, 2018, Geotech Ltd. dba Geotech Airborne of Aurora, Ontario has provided the Company with a 3D interpretation of the helicopter-borne ZTEM geophysical survey of approximately 42 km2; 295 line km at 200m line spacing providing further information to depths over 2000 metres.

Jean M. Legault, M.Sc.A., P.Eng, P.Geo., and Chief Geophysicist of Geotech Ltd., a Qualified Person as defined by National Instrument 43-101, has reviewed and approved the technical information above in this news release as in reference to the ZTEM survey on the Pecors anomaly.

The 3D interpretation and Final Summary of the ZTEM survey can be reviewed on our website: https://www.montororesources.com/serpent-river

Don Hawke, MSc., P.Geo, consulting geologist for Montoro and a Qualified Person as defined by National Instrument 43-101, has provided the following background information:

In 2014 the company completed a 3D inversion of a large magnetic anomaly detected during a previous airborne VTEM survey that outlined a deep seated body with dimensions of about 3.5 km by 1.5 km that was interpreted to be caused by a possible mafic-ultramafic intrusion.

A two hole drill program was carried out in 2015 to determine the source of the anomaly and a gabbro intrusion was encountered at depths of 595 and 650 metres respectively. One hole intersected anomalous Cu-Ni-PGE values over a core length of 29 m and xenoliths of sulphide facies iron formation and sulphide rich exhalite were encountered near the lower contact indicating that the gabbro had access to a source of sulphur, an important prerequisite for the formation of magmatic sulphide deposits. The second hole was stopped in gabbro at a depth of 1317m when the depth capacity of the drill was reached.

During 2018 Geotech was contracted by the company to carry out a ZTEM survey over the magnetic anomaly to search for conductive targets at greater depths than previous surveys could penetrate.

The 3D interpretation and final 2D results of the ZTEM survey will substantially assist in better targeting the next phase of diamond drilling on the Serpent River - Pecors Ni-Cu-PGE project.

Strength in the Nickel and Copper Markets returns:

Gary Musil, comments: "2019, has brought strong Nickel (up 25%) and Copper, in the words of Morgan Stanley, is a metal whose ‘stars are aligned'. Last we drilled at Pecors LME nickel was $7lb driven partially by supply and demand economics with the LME Nickel stockpiles reaching multiyear lows, presently the LME stockpile is below those levels, with Nickel trading at $6.00 up 25% on the year. "

Last week Morgan Stanley joined Citi and Goldman Sachs in making a bullish call on the metal. The investment bank projected a 14 percent upside for copper in 2019, based on a widening supply deficit and the likelihood of a resolution to the U.S.-China trade war. Historic discoverer of the Voisey Bay Mine, Robert Friedland comments; "You're going to need a telescope to see copper prices in 2021."

Simon Moore, Benchmark Mineral Intelligence, testifying to the U.S. Senate committee on Energy and Natural Resources comments; "between 2023 and 2028, lithium demand will increase by over eight times, cobalt demand will rise four-fold (reflecting research aimed at reducing its usage), and nickel by 19 times."

(i) In February 2019 Montoro entered into acquisition agreements with various vendors, to acquire over 3,500 ha of claims in the Cariboo Mining Division, British Columbia, with one claim block adjoining the well-known Wicheeda REE project.

(iii) In February 2018 Montoro received approval for the acquisition of the Duhamel, Quebec property. The Ni-Cu-Co prospect consisted of nine (9) mineral claims comprising 500 ha. Additional staking of thirty-two (32) adjoining mineral claims and compiling of data has been underway since February; and the expanded property now totals approximately 2,300 ha and prospective for Titanium, Vanadium, and Chromium.