LOS ANGELES, CA / ACCESSWIRE / December 5, 2018 / Kathy Ireland has gone from aspiring model at age 16, to one of the nation's top 50 most successful self-made women with an estimated net worth of $420 million. Ireland has appeared on many magazine covers including being named "The Greatest Sports Illustrated Swimsuit Cover of All Time" by SI. 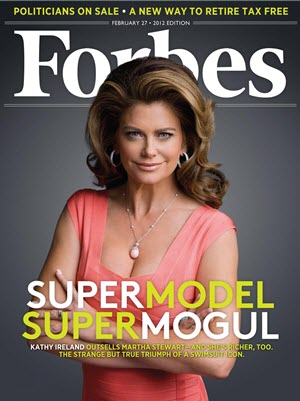 "For this cover shoot I was trying to position Kathy as a power player CEO, a powerful woman. When you have someone who's that beautiful, it's a great combination. It's an exciting thing," Grecco said.

When Forbes compiled its first ever list of the nation's top 50 most successful, self-made women as measured by their net worth, Ireland was ranked #33 with an estimated $420M net worth. The exclusive freshman class included entrepreneurs, CEOs, entertainers, designers, along with members that are extremely well-known, starting with the likes of Oprah Winfrey and Facebook's Chief Operating Officer Sheryl Sandberg.

"I have the privilege of being with world-renowned photographer Michael Greco, doing a shoot for Forbes Magazine. We are amazing fans of yours, your work is extraordinary, such a range," said Ireland right before the Forbes cover shoot began.

According to Forbes, supermodel turned mogul Kathy Ireland built a licensing empire by lending her name and marketing prowess to more than 17,000 products, selling an estimated $2.6 billion at retail. A far cry from having a paper route as her first job. Ireland was scouted by Elite modeling agency (Elite Model Management) at age 16, and also graced Sports Illustrated's Swimsuit Issue cover for 13 consecutive years.

"Michael, you have the biggest Hasselblad in the business," stated Ireland, referring to the size of Grecco's camera he was using for that particular shoot.

A complete behind-the-scenes look of the Kathy Ireland Forbes magazine cover shoot by Michael Grecco can be viewed on this cover shoot video.

Michael Grecco is an extensive award-winning Celebrity Photographer and Creative Director with a photography career spanning 41 years, with studios in both Los Angeles, CA and New York City, NY.

Grecco can be found traveling the globe over 200+ days each year on high-end commercial, advertising, editorial and entertainment photoshoots and cover shoots for many recognizable celebrities, iconic business greats and global brands. For more information on retaining Michael Grecco and his creative team, call +1-310-452-4461 or visit https://www.MichaelGrecco.com.

For News Media and Press Inquiries:

For more information about Photographers PR, contact the company here: