Epic Horror Film Blood Feast is Uncut, Unrated and Only in Theatres Skip to main content

Epic Horror Film Blood Feast is Uncut, Unrated and Only in Theatres

LOS ANGELES, CA / ACCESSWIRE / April 5, 2018 / Fans of the long-awaited, official remake of the horror cult-classic "Blood Feast" will finally get to see this epic new release beginning Friday, April 6 with the theatrical launch of the uncut, unrated director's version. The film will expand to theatres across the country over the following three weeks, including theatrical engagements in 25 cities. "Blood Feast" is the official remake of the classic horror fan favorite from director Herschel Gordon Lewis, produced in 1963 and later achieving cult-hit status with sales of over 1.5-million videos in the USA. This new version was directed by Marcel Walz and is being distributed by Hannover House, Inc. (OTC PINK: HHSE). 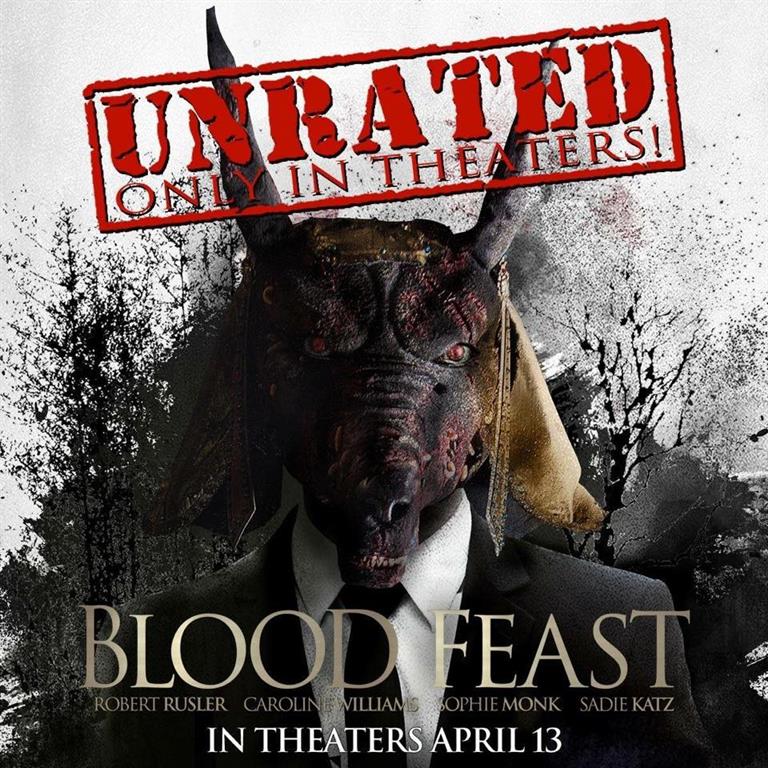 "We are so pleased to finally have a viable theatrical strategy for this film," said Hannover House C.E.O. Eric Parkinson. "The film was originally set for a theatrical launch last summer on more than 100 screens. But the MPAA rating of NC-17 proved problematic for many of the larger theatre chains, and the fan base resisted our plans to edit the film down to the more accessible 'R' rating level. After all, the film is called 'Blood Feast' and deals with a variety of themes unlikely to achieve the 'R' rating status. So, after months of discussions with theatres, the producers and with the fan base in mind, we are excited to be presenting this original uncut, unedited director's version to theatres," he concluded.

"Blood Feast" will launch on Friday, April 6 at the Laemmle Fine Arts Theatre in Beverly Hills. The 7:30 pm screening will include a red-carpet media event featuring many of the films cast and crew members along with horror film icons. The red-carpet event and all showtimes at the Fine Arts theatre are open to the public. Tickets are available through the theatre's website at: www.Laemmle.com.

"The enthusiasm for this official remake has been staggering," said Parkinson. "We have been swamped with calls and emails from horror media and fans from across the country asking us to make sure that the film is coming to their city and telling us that they have a large fan group ready to attend. It didn't take long for us to recognize that the large following from the original film's home video release has generated a very enthusiastic fan base to see this official remake. This is a very unique release in that the director's version is available only in theatres. We hope that this will encourage fans to come see it on the big screen while the film hits each city."

The official remake was directed by acclaimed German director Marcel Walz and features an impressive cast - including an appearance by the 90-year-old Herschel Gordon Lewis, filmed shortly before his death late last year. Other cast members include Robert Rusler ("A Nightmare on Elm Street 2"), Caroline Williams ("Days of Thunder"), Sadie Katz ("Wrong Turn 6: Last Resort") and Sophie Monk ("The Hills Run Red" and the new "Bachelorette").

Fuad Ramses (Rusler) and his family have moved from the United States to France, where they run an American diner. Since business is not going too well, Fuad also works night shifts in a museum of ancient Egyptian culture. During these long, lonely nights he is repeatedly drawn to a statue representing the seductive ancient goddess Ishtar (Katz). He becomes more and more allured by the goddess as she speaks to him in visions. Eventually, he succumbs to her deadly charms.

After this pivotal night, Fuad begins a new life, in which murder and cannibalism become his daily bread. He starts to prepare a ritual feast to honor his new mistress, a lavish affair dripping with blood, organs, and intestines of human victims. As butchered bodies are heaped upon the Altar of Ishtar, Fuad slowly slips further into madness until he is no more than the goddess' puppet; and she thirsts for the blood of Fuad's wife and daughter too…

Media support for the film's North American theatrical release was widespread after the initial announcement plans for a limited release were disclosed. High-traffic, targeted publications and websites that have featured the film's release include ComingSoon.net, DreadCentral.com, HorrorSociety.com, joblo.com and bloody-disgusting.com among many others.