OTTAWA, ON / ACCESSWIRE / September 19, 2017 / Amika Mobile's Amika Mobility Server (AMS), for critical and emergency communications hybrid Cloud and on-Premise platform, has been selected as a finalist as the People's Choice Award for ASIS 2017. The AMS was selected because it is a patented AI-based intelligent agent platform and can process thousands of simultaneous events, while automatically discovering mobile devices in public places, like stadiums, to instantly assist in critical situations and evacuations as a crisis unfolds. 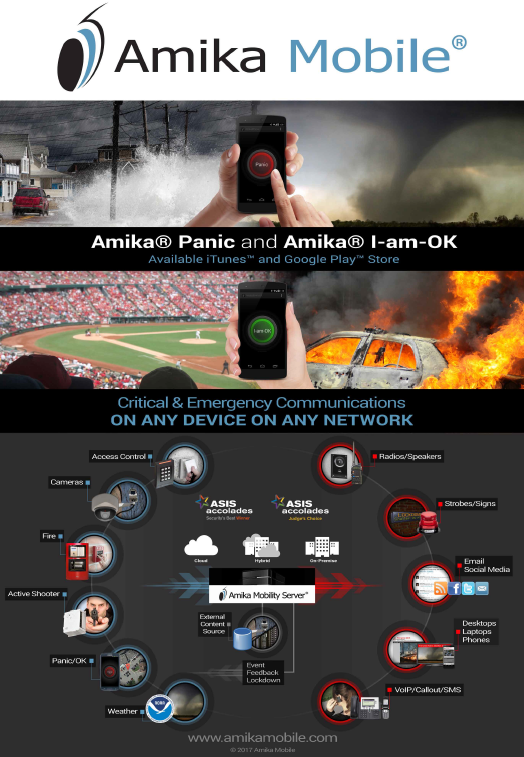 "It is, again, very exciting to be a finalist for ASIS Accolades for the 9th year in a row, as this typically honours the Top 50 vendors at the event. Amika Mobile is consistently selected because of our latest security and safety product innovations directed at public places, like stadiums, where we leverage AI within our AMS intelligent agent platform to save lives," said Amika Mobile CEO Dr. Sue Abu-Hakima.

ASIS is in its 63rd year with nearly 700 security vendors exhibiting. ASIS Accolades judging is based on innovation and excellence of security products. Amika Mobile has consistently been a finalist for ASIS Accolades since 2009, and won the Judge's Choice in 2015 for AMS as an IoT platform for Critical and Emergency Communications. ASIS is known as the world's most influential security conference and trade show, bringing 22,000 security professionals that include buyers from enterprise and government together.

The public safety and security market is growing from $305B in 2011 to $546B in 2022, according to Homeland Security Research Corp. in Washington, DC. Amika® Panic and Amika®Alert, in conjunction with AMS and Amika® Situation Commander, fit seamlessly into this market, which includes incident management, communication and control systems, and mass notification.

Demonstrations of the AMS AI platform, Gunshot Sensor Integration, Amika® Situation Commander critical and emergency capabilities, and Amika®Panic and Amika®Alert Mobile apps will be showcased at the 63rd international industrial security professionals' tradeshow, ASIS 2017 from September 26 to 28th in Dallas, Texas at Amika Mobile's booth, #507, in the Ontario Pavilion.

Amika® Mobility Server (AMS) AI Platform for Stadium & Enterprise Security is a candidate for ASIS People's Choice Accolades award. You can make sure it wins by voting at the Accolades Showcase at the venue and on the 2017 ASIS mobile app. Voting is open September 26th to September 27th.