PORTLAND, OR / ACCESSWIRE / August 3, 2017 / Eastside Distilling, Inc. (OTCQB: ESDI) ("Eastside" or the "Company"), a producer of award-winning craft spirits, today unveiled a homemade combination that is sure to ignite taste buds all over the Pacific Northwest.

We start with our award-winning, Portland Potato Vodka, then hand infuse Secret Aardvark's unique habaneros to create "Hot Potato Vodka." The combination of habanero pepper with the velvet body and low octane of our potato vodka produces a full-palate explosion of flavor. Hot Potato Vodka, which will initially be available in limited distribution, is perfect for Bloody Mary's, sipped "neat" or on the rocks. 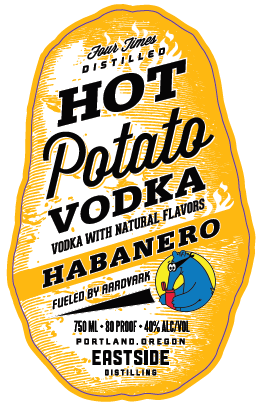 "Who knew Aardvarks like their Vodka hot?" commented Mel Heim, EVP of Operations and Master Distiller of Eastside Distilling. "I guess that after a long day of eating termites and ants, Portland's favorite Secret Aardvark needs a high-energy palate cleanser."

Mel Heim continued, "Secret Aardvark and Eastside have collaborated in the past, with our Below Deck Silver Rum being a critical component of their Drunken Jerk Jamaican Marinade. Now, it's our turn to showcase their habaneros in our mouthwatering, new Hot Potato Vodka. It's great to see local crafters collaborating to make something uniquely Portland."

Secret Aardvark is a Portland-based sauce company that has grown rapidly and has an extensive cult following for the simplicity of its packaging and quality of the sauce - along with its famous Aardvark mascot. The Company's flagship sauce features a unique "Caribbean meets Tex-Mex" flavor and just enough heat to slap the sass outta your mouth. It's a versatile table sauce that adds a special something to dang near anything, and works as a marinade, too. Iron Chef Michael Symon called Secret Aardvark Habanero Sauce, "The Greatest Hot Sauce Ever." He and fellow Chef, Mario Batali, have promoted the habanero sauce on ABC's The Chew, making Chef Batali's Top Five Hot sauce list.

Eastside Distilling, Inc. (OTCQB: ESDI) is located in Southeast Portland's Distillery Row, and has been producing high-quality, master crafted spirits since 2008. Makers of award winning spirits, the company is unique in the marketplace and distinguished by its highly decorated product lineup that includes Barrel Hitch American Whiskies, Burnside Bourbon, Below Deck Rums, Portland Potato Vodka, and a distinctive line of infused whiskeys. All Eastside spirits are master crafted from natural ingredients for unparalleled quality and taste. The company is publicly traded under the symbol OTCQB: ESDI. For more information, visit: www.eastsidedistilling.com, or follow the company on Twitter and Facebook.