VANCOUVER, BC / ACCESSWIRE / February 24, 2016 / CanAlaska Uranium Ltd. (TSXV: CVV) (OTCQB: CVVUF) (FSE: DH7N) ("CanAlaska or the Company") is pleased to announce it has entered into an option agreement with Cameco Corporation (TSX: CCO) (NYSE: CCJ) ("Cameco"), one of the world's largest uranium producers, for exploration of CanAlaska's West McArthur Uranium Project ("Project"). The agreement enables Cameco to earn up to a 60% interest in the Project through total expenditures of $12.5 million consisting of cash payments to the Company and accelerating exploration programs, culminating in a joint venture. 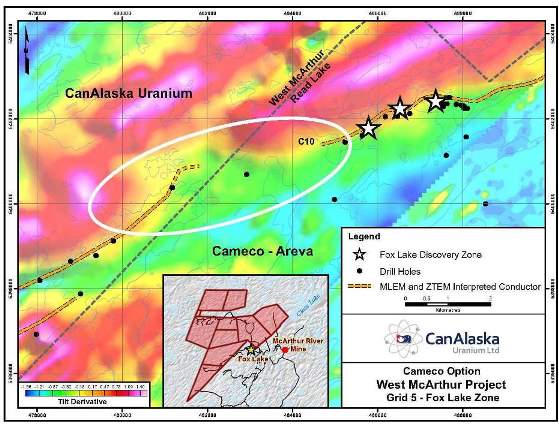 To view an enhanced version of this image, please visit:
https://www.accesswire.com/uploads/19371_canalaskaenhanced.jpg

To earn a 60% interest in West McArthur, Cameco will pay CanAlaska an initial $725,000 to have the right to earn a first stage 30% interest for a $5 million exploration program within 3 years on two separate target areas: Grid 1 and Grid 5. Cameco will then have the right, after a $500,000 payment, to carry out a further $6.275 million of work on the Project over the following 3 years to earn a further 30% interest and form a Joint Venture (JV) with CanAlaska. A guaranteed minimum $1 million work program is required in the first year and permitting and planning for a 2016 drill program is underway.

Cameco's exploration team has been very active on the Read Lake Project and their Fox Lake target since 2008 when the company announced, "The newly discovered mineralization along the C10 conductor attests to the potential for finding a significant uranium deposit on the Read Lake property." And "… with mineralization found 90 to 150 metres above the unconformity." (Cameco Assessment Reports 2008 and website). In February 2016 Cameco stated, "Among the larger expenditures planned is $7 million on the Read Lake project, which is adjacent to McArthur River in Saskatchewan." (January 2016 MD&A).

In 2012, CanAlaska and MC Resources, a subsidiary of Mitsubishi Corporation, identified new uranium exploration targets on the Grid 5 target zone, which the JV believed hosts the western continuation of the C10 conductor horizon being explored by Cameco at Fox Lake. The large sulphide and arsenic alteration zones seen in the Athabasca sandstone in drill holes WMA 28 and WMA 34 from the JV's 2012 program, are similar in style to that reported from the Fox Lake target drilling by Cameco (see April 13, 2012 news release http://www.canalaska.com/s/News.asp?ReportID=518515). Additionally, hole EL-007 drilled in 1988, located on CanAlaska's West McArthur property near the northern flexure of the main conductor, is strongly silicified and altered in the top 400 metres of the sandstone column. The hole displayed the characteristics of being above a major hydrothermal system, large enough to send fluids 800 metres above the Athabasca unconformity.

CanAlaska's exploration on the West McArthur project commenced in 2004, with the first of a series of deep penetrating airborne EM surveys. These early surveys identified a number of potential uranium targets, which older airborne survey technologies could not detect. In 2006 CanAlaska entered into an exploration option agreement with MC Resources, and commenced a systematic survey of the Project by progressively carrying out surface geophysics followed by drill testing on the airborne targets. CanAlaska and MC Resources' prioritized exploration on Grids 1, 4 and 5, the most prospective known targets, and areas which had shown alteration patterns and trace uranium mineralization, generally associated with large Athabasca-style unconformity deposits. The West McArthur Joint Venture commenced following the $10 million earn-in by MC Resources in early 2010, but exploration drilling has been postponed each of the past two years because of market conditions.

CanAlaska president Peter Dasler comments, "There has been considerable detailed ground exploration and drilling by Cameco immediately east of our drill holes at Grid 5 on the West McArthur project. Cameco's recent announcement of the large, high-grade Fox Lake resource demonstrates the potential for discovery of additional uranium deposits along the C10 conductor extension and other targets in the Grid 5 area. In the past there has also been co-operation between Cameco and the West McArthur JV with regard to overlapping survey areas. At this stage CanAlaska considers it prudent to utilize the expertise and funding that Cameco can provide, so that we can rapidly advance our opportunity for discovery of a new unconformity uranium deposit. We are very pleased to have been approached by Cameco, and to have concluded this significant agreement which allows multiple targets to be evaluated with minimum equity dilution to our shareholders while retaining a meaningful interest in West McArthur."

CanAlaska is concentrating on pursuing further property option and joint ventures opportunities under confidentiality agreements on its non-core projects, as well as evaluating further targets in the Athabasca region.

Further information on Cameco can be found at www.cameco.com

The TSX-V has not reviewed and does not accept responsibility for the adequacy or accuracy of this release: CUSIP# 13708P 10 2.