VANCOUVER, BC / ACCESSWIRE / February 18, 2016 / CanAlaska Uranium Ltd. (TSXV: CVV) (OTCQB: CVVUF) (FSE: DH7N) "the Company" is pleased to report that it has acquired by staking approximately 75 kimberlite targets in the Western Athabasca Basin, Saskatchewan. The claims staked by CanAlaska cover kimberlite style targets developed from a high resolution airborne geophysical survey carried out on behalf of the Saskatchewan Geological Survey. The 2011 airborne magnetic survey reveals a series of discrete magnetic anomalies with a shallow signature northeast of the Carswell structure and close to a large crustal structure, the Grease River Shear Zone. The Saskatchewan Kimberlite Indicator Mineral sampling (KIM) programs reached close to the Carswell structure, but the most northern samples remain southeast of the down-ice trend from these magnetic anomalies. 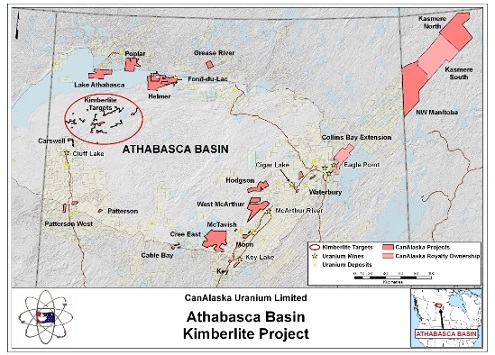 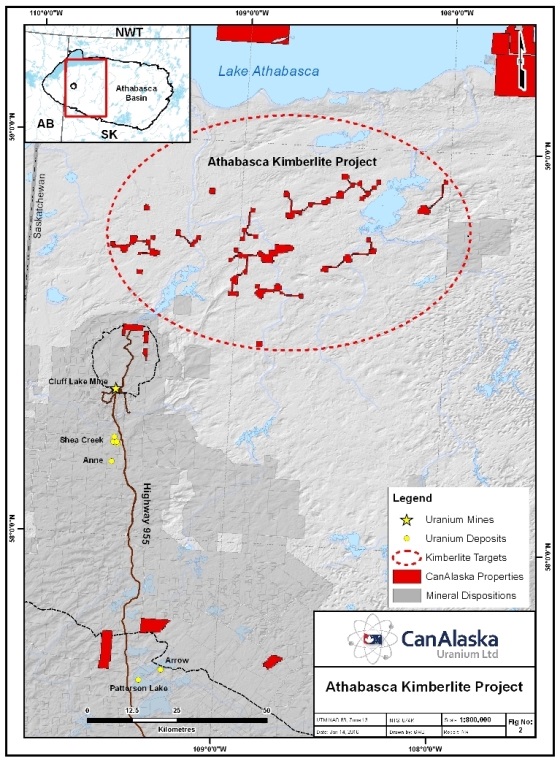 There is has been no known kimberlite exploration in the Athabasca Basin and limited general exploration in the project area. The Fort McKay-Fort McMurray KIM trend in Alberta is dominated by chromite, but contains also some pyrope and eclogitic garnets. These appear to be down-ice from the targets identified by CanAlaska in the northwestern Athabasca within the Athabasca sandstone. The basement rocks below the Athabasca sandstone in the project area are classified as Rae Province. The Rae Province rocks host diamondiferous kimberlites in Nunavut. The Buffalo Hills and the Birch Mountain kimberlite fields in Alberta appear to lie on the same structural trend as the project area.

President Peter Dasler commented: "These 75 circular targets fit all the geophysical criteria of kimberlites, and the clustering of the targets around major geological structural features within the Rae Province basement rocks is added impetus for immediate investigation. I want to thank Dr. Karl Schimann, CanAlaska's V.P. Exploration, who researched and identified the targets which were later confirmed by further geophysical interpretation by CanAlaska's contract geophysicist Dr. Jules Lajoie. We have some distance to go to establish whether these targets are kimberlites, and then whether they contain diamonds, but we are very encouraged by large number of distinct targets and the existence of indicator minerals to the southwest."

In other matters the Company continues to advance discussion with third parties in relation to these claims and also its uranium landholdings in the Athabasca region.

The TSX-V has not reviewed and does not accept responsibility for the adequacy or accuracy of this release: