Toronto, Ontario / accesswire / December 23, 2014 / Theralase Technologies Inc. ("Theralase") (TLT:TSXV) (TLTFF: OTC Pink(R)) announced today that it has obtained preliminary results from the use of Photo Dynamic Therapy ("PDT") to destroy bladder cancer in an orthotopic ("occurring at the normal place in the body") rat model.

The University of Toledo in conjunction with the Princess Margaret Cancer Centre, University Health Network ("UHN") and Theralase conducted the experiment in a well-established orthotopic model for bladder cancer in rats.

This data suggests that the combination of TLD1433 and visible red laser light has potential to induce urothelial tumour destruction with an exceptionally high margin of safety.

Theralase will continue evaluating these preliminary experiments to further confirm that laser light activated TLD1433 results in defined tumour necrosis with preservation of the normal bladder wall, sparing the surrounding urothelium. TLD1433 may thus offer versatility beyond what exists with traditional treatment methodologies for bladder cancer by destroying bladder cancer tumours and sparing healthy urothelium. TLD1433 is currently undergoing the final stages of pre-clinical optimization in preparation for a Health Canada and FDA human Phase I / IIa clinical study for this new class of PDCs in 2015. 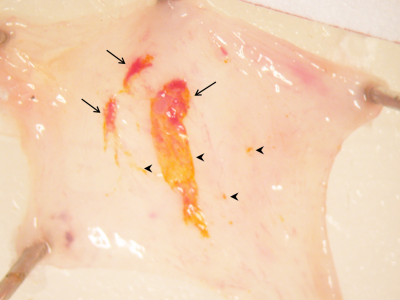 Steve Selman, MD, FACS, Chair and Professor of Urology and Director of Urological Research, University of Toledo, Toledo, Ohio stated that, "I am pleased to report that this preliminary study warrants further evaluation of the Theralase PDCs in their ability to localize to compromised urothelium and when laser light activated destroy the bladder cancer tumours via necrosis. This is early research, with non- optimized doses of PDC and laser light sources, but it is encouraging. Further evaluation with additional treated and control animals, along with additional blinded histopathological analysis will more definitely support these initial finding and provide us the scientific rigour required to strongly support out initial clinical findings."

Michael Jewett MD, FACS, Professor of Surgery in the Division of Urology at the University of Toronto and a member of the Department of Surgical Oncology at UHN stated that, "I am delighted that Theralase has advanced their research program to an animal model and that preliminary results have demonstrated preferential uptake of the PDC in cancerous urothelium. The healthy urothelium is not visibly affected and virtually no PDC was detected systemically, which are important elements of a high therapeutic index and favourable safety profile."

Roger Dumoulin-White, President and CEO of Theralase stated that, "I am elated that Theralase is able to report the successful achievement of this very significant milestone in our ongoing collaborative research and development program for our state-of-the-art PDC technology. It has always been Theralase's strategic milestone to prove the safety and efficacy of our PDC technology in an orthotopic rat model to provide our shareholders and investors the assurance that our technology has been validated to be safe and effective in animals prior to the Theralase team turning their attention to evaluating this technology in a human clinical study. I am proud to be associated with such a strong scientific and clinical team that was able to accomplish this very significant milestone. 2015 is going to be extremely exciting year for the Company."

Founded in 1994, Theralase Technologies Inc. ("Theralase(R)") (TSXV: TLT) (TLTFF: OTC Pink(R)) designs, manufactures and markets patented super-pulsed laser technology used for the elimination of pain, reduction of inflammation and dramatic acceleration of tissue healing. Theralase has sold over 1,200 systems to licensed healthcare practitioners, including: medical doctors, chiropractors, physical therapists and athletic therapists. Theralase has been so successful in healing nerve, muscle and joint conditions in clinical practice that Theralase's scientists and clinicians have now turned their attention to investigating the application of its lasers in the destruction of cancer, using specially designed molecules called Photo Dynamic Compounds ("PDCs"), which are able to localize to the cancer cells and when light activated, destroy them.

Additional information is available at www.theralase.com and www.sedar.com .