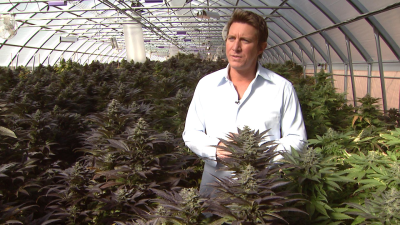 The Conference keynote speaker is Mr. Josh Stanley, of Charlotte's web fame. He will be speaking at 12:15 p.m. on Thursday, June 26.

In 2010, Josh assisted in the drafting of House Bill 1284, the first bill of its kind to further define and establish Colorado's medicinal cannabis state regulatory structure through the Colorado Department of Revenue. The following year he assisting in drafting House Bill 1043 and was responsible for writing the research and development portion of the bill. Josh sat on the rules and regulations board of the Colorado Department of Revenue's Medical Marijuana Enforcement Division as well as the rules and regulations board for research and development.

Josh is credited with creating the idea to breed a non psychoactive strain of the cannabis plant with low Tetrahydrocannabinol (THC) and high Cannabidiol (CBD) content which became known as "Charlotte's Web." This specialized sativa varietal of medical cannabis has shown promising results in alleviating symptoms of intractable pediatric epilepsy as well as a variety of other illnesses and disease states. Josh's effort to help children restore their lives with high-CBD cannabis extracts made international headlines in 2013 and was prominently featured on Sanjay Gupta's highly acclaimed CNN documentary special WEED, and just recently in March of 2014 was followed by the sequel, WEED 2.

Josh had the honor to perform a TEDx Talk in Boulder, Colorado that allows viewers to understand, in less than 19 minutes, the true healing powers of medicinal hemp, (high CBD strains).

A much sought after speaker, Josh has the ability to sift through the propaganda and fear encompassing the medical marijuana industry and delivers a compassionate appeal to end cannabis prohibition. Josh has recently been active in international arenas as he seeks to foster the advocacy for medicinal rights to cannabis on the global stage. .

Full list of Conference Speakers: For a complete list of speakers and their profiles which shows their diversity and areas of expertise including scheduled presentation times, please visit www.greenrushfinancialconferences.com and click on the Agenda page.

Management welcomes everyone who has an interest whether personal or for business to attend the GreenRush Conference and listen to all of the speakers who will provide an insight into a wide range of topics within their respected fields of expertise.

Next Gen is a diversified Canadian public company which focuses on investing in the Medical Marijuana, Industrial Hemp and Alternative Medicine sectors. Recent regulatory/legal changes in North America have provided an opportunity for the company to enter into this emerging multi-billion dollar industry. Next Gen's vision is to be the leading provider of venture capital, management expertise, education, brokerage and consultancy solutions and a facilitator for these explosive new industries. For further information on the company, visit our website at www.nextgenmetalsinc.com